Friday’s employment report featured the headline unemployment rate falling from 5.0% to 4.7% – which is a huge move lower. About the only encouraging aspect of the report is that markets largely ignored the fantasy headline for a change and focused on the ugly details. Nearly everyone acknowledged the report as bad news and markets reacted accordingly.

But not all. Janet Yellen and her crew at the Fed must see through the phony statistics because they are so reluctant to tighten monetary policy. Publicly, however, they talk about job growth and the wonders their stimulus policies have worked.

"There are three kinds of lies - lies, damned lies and statistics."

President Barack Obama and Hillary Clinton also talk triumphantly about putting people back to work. Obama has been parading around the country talking about the fabulous economic recovery he has led. Hillary takes credit for a recovery as well, but promises she can do even better.

They prefer people focus on the headline number and not ask too many questions. After all, their people at the Bureau of Labor Statistics have been hard at work “seasonally adjusting,” modifying the formulas, and otherwise massaging the data. They are painting such a lovely picture for voters to enjoy.

The “unemployment rate” has fallen to levels not seen since before the 2008 financial crisis. It’s like magic. And just about as real as when David Copperfield made the Statue of Liberty disappear.

The contradiction in their data just keeps getting bigger. The phony “unemployment” rate and the percentage of the population with a job, which readers get by digging into the report details, BOTH keep falling. 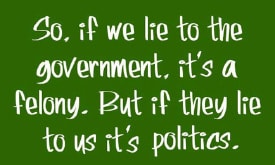 And the explanations are getting pretty outlandish. We’re told people are “voluntarily” leaving the workforce in droves. Prosperity is so high lots of folks are retiring early, switching to part time work, or living on a single income so one parent can stay home with the kids. Riiiiight!!

If people have stopped buying it, will officials and their friends in the financial press stop waging their disinformation campaign? One would think the loss of credibility and embarrassment might limit the amount of nonsense they publish each month.

At least, as said, the people didn’t buy Friday’s headline for once. If we are going to have free markets and find solutions, Americans will have to grapple with reality. James Quinn, of the Burning Platform, does a great job of looking past the headline and pulling some interesting facts out of the employment data:

That is the reality when it comes to jobs in the U.S. Keep questioning the official propaganda.