This year’s presidential election is getting lots of attention, and customers are asking about how the outcome might impact the gold and silver markets. The questions generally fall along two lines. One is whether we think a Donald Trump victory will be good for prices and another regarding what a Hillary Clinton presidency might mean.

There is no telling exactly what either candidate has in store for the nation. And, this year more than most, we can’t even be certain that either of the front runners will win. There is plenty to dislike about both Trump and Hillary and many voters are looking for alternatives. The Libertarian party has become the fastest growing political party in the country. 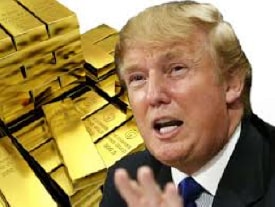 That said, one of these characters is highly likely to be moving into the White House next January. Let’s start by noodling for a bit on what a Trump administration might mean for precious metals. Of the two candidates, he is perhaps the bigger wildcard.

For starters, this is man who owns gold and knows something about why it’s important.

There aren’t a lot of people like that in Washington DC. Trump reports owning up to $200,000 worth on his financial statement. He even talks about returning to a gold standard from time to time. He told thescene.com: “Bringing back the gold standard would be very hard to do, but boy would it be wonderful.”

“Very hard” is an understatement. Trump would need to convince Congress. That means defeating the Federal Reserve and the Wall Street lobbyists for starters. Don’t expect him to pick that battle unless an economic or currency crisis gets Americans behind him on sound money issues.

Even if Trump likes gold, it isn’t clear he has considered exactly what returning to a gold standard would mean. Tying the dollar to gold makes deficit spending a lot harder for the Federal government. The link to gold would largely prevent the practice of borrowing money into existence to cover the shortfall between the cost of the lavish promises politicians have made to voters and tax revenue the government actually collects.

The Federal deficit ranged between $400 billion and $1.4 trillion in recent years. Trump would need to be pushing for a massive reduction in government, including cuts in entitlement programs which are the lion’s share of the federal budget. But he isn’t.

Still, each time Trump raises the topic of gold it is good for the metals markets. Wall Street and the Federal government colluded to make Americans forget about gold and silver as money and as investable assets. Today, only an estimated 1% of people own any precious metals coins, rounds, or bars. More awareness will correlate to more ownership. Just doubling the number of folks who own bullion to a modest 2% would have a profound effect on demand and thus, prices.

The effects of a Hillary Clinton victory on precious metals markets should be easier to predict...

Expect the unholy alliance between the market manipulators at the Fed, Wall Street banks, and politicians in DC to stay the course on: 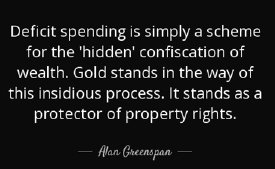 Hillary represents more of the same to be sure. In the end, however, neither candidate is talking seriously about the kinds of fundamental reforms that would change our trajectory toward national bankruptcy. Perhaps even more importantly, Congress isn’t talking about them and neither are the vast majority of Americans.

The mega banks are unrepentant and the Federal Reserve (which they officially own and enjoy a very cozy relationship with) isn’t going to suddenly acknowledge failure and close up shop.

We do not expect any politician to deliver solutions before the reckoning comes in the currency and bond markets as well as the broader economy. The powerful fundamental case for owning bullion isn’t going to change unless or until crisis forces massive reforms. There is no predicting when that will be, but it is almost certainly going to be well after this fall’s election.

The way we see it, though, all political outcomes this year are likely to be good for gold and silver.