Mega-billionaire Carl Icahn, whose long-term track record is unrivaled, recently warned that “there will be a day of reckoning unless we get fiscal stimulus.” Icahn’s hedge fund is betting on a day of reckoning scenario. He has gone 150% net short the stock market while holding commodity-related positions to the long side. 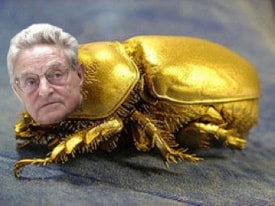 International currency speculator and leftist financier George Soros has slashed his fund’s overall equity holdings by 25%. Like him or not, Soros is no dummy when it comes to the financial system. He is an establishment insider who apparently sees turbulent times ahead. He owns a not insignificant amount of gold, and his largest single equity holding now is Barrick Gold (NYSE:ABX), a major gold mining company.

“The system itself is at risk,” warns bond market wizard Bill Gross. In his latest market commentary, Gross cites “artificially high asset prices and a distortion of future risk relative to potential return.”

Prices for financial assets such as stocks, bonds, and real estate investment trusts are artificially high because interest rates are artificially low. Thanks, of course, to the Federal Reserve. Markets are floating on a sea of leverage made possible by eight years of ultra-accommodative monetary policy and the widespread belief that the Fed will step in as a buyer of last resort to support asset prices.

Former Fed chairman Alan Greenspan helped fuel a stock market bubble in the late 1990s and handed off a burgeoning housing bubble to his successor Ben Bernanke. Ironically, Greenspan has since sought to position himself as something of an elder statesman for fiscal responsibility. To his credit, he now recognizes that the biggest, most dangerous bubble today is that of runaway government debt ahead of a looming Baby Boomer retirement/entitlement crisis, and he has turned quite bullish on gold.

“We should be running federal surpluses right now not deficits. This is something we could have anticipated twenty-five years ago and in fact we did, but nobody's done anything about it. This is the crisis which has come upon us,” Greenspan said in a recent interview. “We're running to a state of disaster unless we turn this around."

With some $200 trillion in projected unfunded liabilities, the federal government will have to default on some of its promises directly or by inflating away the value of those promises. That’s the big picture. The next cyclical downturn and potential crash could be triggered by a more immediate event in the economy or in the over-leveraged financial markets.

The front page of the May 30th Barron’s features the headline, “The Stock Market Won’t Crash – Yet.” Author Gene Epstein argues that stocks won’t crash in the near future, because “the odds of a recession are now quite low.” Not just “low,” mind you, but “quite low”!

Gold never tarnishes, and its price has advanced nearly 20% since Barron’s scared investors out of precious metals with facile predictions of Fed rate hikes.

If the real-world economic data could respond, it would beg to differ. Manufacturing activity recently suffered its biggest drop since 2009. The New York Purchasing Managers Index swooned in May to suffer its biggest monthly drop in nine years.

And the Labor Department’s most recent jobs report, released on June 3rd, revealed that employers hired the fewest new workers in nearly six years. Corporate profit margins peaked several months ago and are turning down.

These are exactly the types of conditions that presage a recession. That, in turn, could trigger massive new fiscal and monetary stimulus measures that weaken the dollar and drive safety-minded investors into precious metals.

To that, I respond: Get real! Gold never tarnishes, and its price has advanced nearly 20% since Barron’s scared investors out of precious metals with facile predictions of Fed rate hikes.

Interest rates will at some point have to go up. Escalating credit concerns and inflation fears could cause markets to drive up bond yields, regardless of whether the Fed hikes its benchmark rate.

Even just a 1 percentage point rise in bond yields from their current low levels would cause $1 trillion in capital losses, according to a Goldman Sachs analysis. Rising interest rates are disastrous for bondholders and hazardous to all financial assets.

To the extent that they are associated with rising inflation expectations, however, rising interest are bullish for hard assets. This has been proven during past rising rates cycles, the last major one being during the late 1970s.

By one estimate, the derivatives market has exploded to a mind-boggling $1.5 quadrillion, more than double the dizzying heights of 2007.

Of course, these aren’t actual assets. Total world GDP is a mere $78 trillion; $1.5 quadrillion in wealth does not exist. Derivatives represent layers of speculative bets and hedges on actual assets.

The size of the derivatives market shows just how ridiculously leveraged the system has become. The gold market is a case in point. Physical gold now represents just a tiny fraction of the “gold” that gets traded in futures markets. Earlier this year, leverage exploded to more than 500 to 1.

A blow up in the futures market or other derivative markets could cause a “run on the bank” and the financial system to be thrown into chaos. The U.S. dollar could either crash or surge in a financial panic, depending on how it unfolds. But the official response to a financial crisis will be – as it always has been – to flood the system with more liquidity; i.e., inflation.

Among the assets that will be left standing are physical precious metals held outside the banking and brokerage systems.