The silver bull is back. After five long, frustrating years of price smashes followed by one failed rally attempt after another, silver prices have decisively broken out to the upside.

The question facing precious metals investors now is: How sustainable is the uptrend? 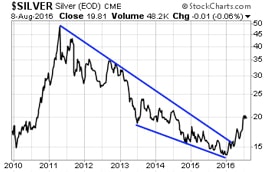 A major breakout doesn’t necessarily portend any particular duration or price objective to follow. The silver market is notorious for producing price swings that befuddle forecasters. Nevertheless, the birth of a new cyclical bull market suggests the potential for a multi-year up move to come. Before it’s over, we are likely to see new all-time highs.

The good news for those not yet invested in silver is that even after the impressive rally so far in 2016, prices remain relatively depressed. Silver still trades at less than half its former high mark.

In order for silver to match its all-time high of around $49.50/oz, prices would have to advance another 130% from recent levels. A return on investment of more than double is a pretty good proposition. Such a return would likely best any gains from stocks, bonds, or other conventional financial assets.

But in the silver market, a doubling of prices is no big deal. This is a metal that went up 10x from 2003-2011. And First Majestic Silver (AG) CEO Keith Neumeyer stated his belief on the Money Metals podcast that this new silver bull will take the price from $13.50 to $135.

Indeed, the most explosive gains in the bull market that began this year may occur after silver breaks out to new record highs. From a technical standpoint, there is no telling how far silver prices could launch as prices will literally be in uncharted territory. Not only that, but silver would be breaking a double-top resistance level that stretches all the way back to January 1980, when silver spiked briefly to over $49/oz. A new high would mean 36+ years of accumulated selling pressure is no longer a factor.

Silver naysayers can point to the potential for weak industrial demand for the metal and few signs of a rebound out of China, whose economic ebbs and flows have lately been a primary driver of base metals markets. Silver is not merely a base metal, though.

It is a precious metal with a history (and likely a future) of being used as money. Although silver is no longer treated as a monetary asset by central banks, that could change. 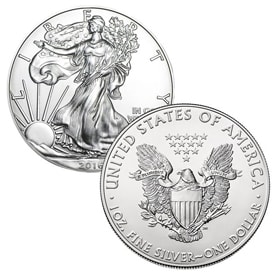 American Silver Eagles available for
as low as $2.55/oz over spot.

There has been a push in Mexico and elsewhere to re-introduce silver into the monetary system. The advantage of silver is that it can be minted into coins and circulated into the economy much more readily than gold, which is too dear in price for most everyday transactions.

In the meantime, investment demand for silver is surging dramatically. Sales of U.S. Silver Eagles hit an annual record last year and are on pace to potentially set another record in 2016. In June, total holdings in silver exchange-traded funds set a record high.

Investment demand alone is putting silver back in supply deficit. New supply from North American mines totaled just 49 million ounces last year. That’s not even enough to cover the amount of silver needed by the U.S. Mint to satisfy investor demand for coins!

Despite growing investment demand, silver remains a relatively tiny area of the investment universe. All the silver bullion products in existence amount to a few billion dollars. A few billion barely registers in a sea of more than $100 trillion in global financial assets. If investors collectively tried to move just 0.1% of their assets into physical silver, the market would explode.

Right now some $15 trillion is parked in debt instruments around the world with negative yields. In other words, “investors” are holding onto $15 trillion in paper issued by governments and banks that is guaranteed to return a loss! It’s perhaps history’s most unfathomably dumb – and now dangerously large – asset bubble.

It’s gotten so insane that Switzerland was recently able to sell 50-year bonds with a negative yield attached to them. Who in their right mind would want to own an asset that promised to return paper losses for the next five decades?

Eventually, this madness will end. It doesn’t take a great deal of financial sophistication to see the benefits of holding cash in the form of precious metals instead of negative yielding IOUs. The upside potential of precious metals is far superior to any fixed rate bond, let alone one with a negative return built in.

A flight from negative returns could be a windfall to gold and silver markets. It could be a catalyst for a mania phase in precious metals. That hasn’t happened since the late 1970s.

In order for silver to match its January 1980 peak in CPI-adjusted terms (which arguably understates real-world inflation), prices would have to climb to $144/oz. The upshot is that even if inflation doesn’t pick up from here, triple digit silver is well within reach during this bull market.