In all probability, December 2015 marked the bottom of the cyclical gold and silver bear market – a bear cycle that had been in play since silver topped in May 2011 and gold in September of the same year.

During the fourth quarter 2015, share price declines of the precious metals mining companies tapered off once the last of the weak hands gave up and sold their positions to stronger, forward-looking investors. 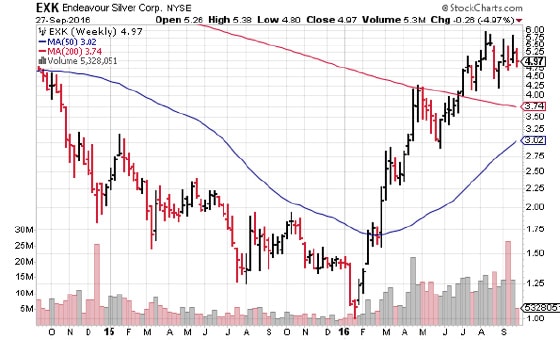 If you go to a free chart service like stockcharts.com, you can choose any number of mining stocks and look at their January 19 daily price action. On this date – for most of the top and second-tier companies – the last intraday price plunge took place. For purpose of example only, we have chosen Endeavour Silver.

Notice how the price made a new low, then moved up into the preceding day's/week's range to close on a strong note for the session. It’s likely this low print will not be touched again during the current bull run.

What Have Physical Gold and Silver Been Doing?

Silver has risen more than 40% so far this year; gold is up almost 20%. Dozens, if not scores, of mining stocks rose several times as much (as expected). In fact, Jim Flanagan, who keeps track of the size and duration of first leg bull market runs across many asset classes, had the following to say about this year's multi-month mining stock rise:

The 175% Advance in Gold Stocks in 5 Months, 22 Days Now Places Us As the 11th Greatest 1st Leg Up in Any Bull Market in Any of the Tangible Assets During the Past 150 Years. In Other Words, It Is the Elite of the Elite.

A few resource sector newsletter writers got their subscribers onto "the right side of the trade" early this spring, but a number of others either jumped out too early at the first sign of a "correction" (of which there have been 6), or sat out the entire year, waiting for what they hoped would be a low-risk entry point. 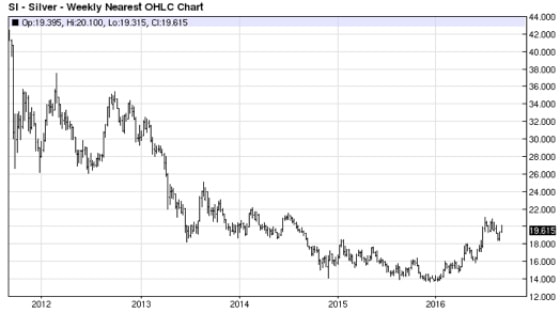 The World's Central Banks Are Buying Up Mining Stocks

While there was considerable institutional, individual, and hedge fund buying of both the miners and metals, an unexpected long side category of customer has recently emerged.

Deutsche Bank, Germany's (and Europe's) largest – otherwise in very poor financial shape – is said to be holding no less than 50 mining sector stocks, with a total market value of over $2 billion. The Swiss National Bank holds 25 stocks at a $1 billion market value. Now Norway's Central Bank (Norges Bank) has filed notice with U.S. regulators that it too holds securities in 23 mining stocks to the tune of just under $1billion.

Isn’t it ironic that the very financial entities who have been instrumental in flooding the world with un-backed currencies are now buying mining stocks as insurance for their own financial holdings? (Not to mention that, since 2010, central banks have been net buyers of physical gold!)

In almost every major bull market, the public begins to arrive at the party after the first few innings have been played. This time around we can make a guesstimate as to what price levels are likely to "trigger" a wave (waves?) of physical metals' buying by newly-informed, recently-committed members of the public.

Note on the weekly silver chart above, the $26 level when touched for the fourth time in 2013 broke down sharply, initiating a further two years of decline. A rule of charting is that broken support becomes resistance to a return move.

Therefore, it is reasonable to expect that $26 will offer a major (initial) impediment to rising prices.

When the $26 level is decisively penetrated on the upside and a base built above it, prices have the potential to accelerate rapidly.

David Morgan and I are working on a book dealing with metals and the mining stocks, titled Second Chance: How to Make, and Keep Big Money During the Coming Gold and Silver Shock-Wave, due out early this fall.

In one chapter, we list in bullet form some of the "indicators" we believe will mark the way for greatly increased public sector precious metals involvement. They include:

As these events are taking place, the effect on availability (as well as on expanding premiums) for physical gold and silver will be profound. As new nominal highs in both gold and silver are printed, several situations begin to develop.

Late August into September ushered in an intermediate and much needed correction to the year's blistering uptrend for the metals and miners. If you believe, as we do, that the new bull run for gold and silver has at least several more years to run, then going against your emotions and adding to your position – or starting a new one – is the right thing to do.

Adam Hamilton sums it up well when he demonstrates a key trait which separates those who do well as investors, from the rest, who just hope, plan, and watch. Says Adam:

Buying low is never easy. When selloffs snowball to major levels, there’s always a chance they will cascade even lower. So it’s very challenging psychologically to fight the thundering herd and buy when everyone else is selling. It feels terrible buying into capitulation selloffs, almost nauseating. The only way to build the fortitude necessary to do it is to stay exceptionally informed, which helps frame selloffs in context.

Even after you've done the research and decided to participate, buying into price weakness against the herd and contrary to your emotions is not an easy thing to do. But time and again, some of the world's most successful investors have done just that. You might want to consider joining their ranks.