Precious metals markets enter the fourth quarter near a potential inflection point on the charts (see below). Gold and silver traded mostly sideways in the third quarter, with gold losing less than 1% for the quarter and silver managing a 2.5% quarterly gain. 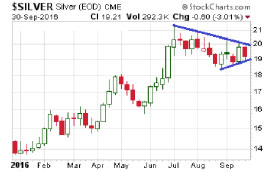 The money metals finished the month of September on a bit of a down note last week. However, no major technical levels got breached.

The technical setup on the silver chart shows a three-month consolidation narrowing toward an end point.

Bulls are looking for a weekly close decisively above the $20/oz level to confirm an upside breakout. A strong break below $19, however, would put the bears in the driver’s seat.

Either way, investors should brace for a big move in the silver market in the days ahead, probably before the end of October.