What in the World Happened to Gold and Silver Prices Last Week?

Gold and silver prices charged higher during the first 6 months of the year. They fell into a rut over the summer, and then hit the skids last Tuesday. Lots of bullion investors are wondering what in the world happened. There are three primary factors driving this price correction.

1. Strength in the U.S. Dollar

The first is the strength in the U.S. dollar. The DXY index, which measures the dollar against other major world currencies, hit its highest levels since July. This surge, however, is not driven by safe-haven buying as it was immediately following Brexit. That sort of fear driven buying would almost certainly be boosting precious metals as well. Rather, investors are looking forward to the Federal Reserve tightening monetary policy, which helps the dollar but hamstrings precious metals.

The gold bug’s old nemesis – the Fed – just keeps coming back. It seems nothing can kill the market’s expectations of higher interest rates. Despite years of meaningless threats to hike, slowing GDP growth, and other weak economic data, the consensus for a rate hike by year’s end is growing once again.

The second factor is related to the first. Longer-term interest rates are rising. The yield on 10-year Treasury bonds recently hit the highest levels since June. The bond markets largely ignored Fed jawboning in regards to higher rates during the late spring and summer, but now they are behaving as if a rate hike is a certainty. Rising real interest rates create headwinds for gold, which does not offer a yield.

The last factor is (or was) the extraordinarily high speculative interest in metals. Open interest in both gold and silver futures soared as metals ran higher and then peaked following Brexit. That speculative interest fell slightly as prices stalled during the summer, but less than expected. The markets entered October with lots of traders still willing to hold out for higher prices as long as prices weren’t breaking down. 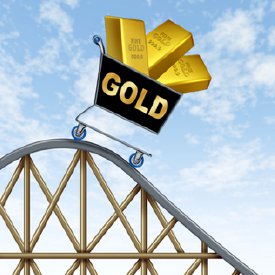 Across the table from them sat the bullion banks, heavily short and pushing for prices to fall. The impasse broke when the stronger dollar and higher rates pushed metals below technical support. Weak-handed speculators ran for the exits.

The good news, if any, is that flushing weak hands and reducing open interest will put markets in a better position to bottom and start a new leg higher. Of course, much will depend on what happens in the dollar and in interest rates.

Our view remains unchanged. The Fed is going to find it difficult to normalize interest rates and eventually markets will figure that out. Stimulus addicted stock and real estate markets achieved their current highs based on the flood of cheap money.

And the federal debt would take roughly a trillion dollars a year to service if the cost of funds heads north to 5%, which is closer to “normal.” That would mean debt service consumes more than 25% of the entire federal budget. Given the projections for rising deficits in the years ahead, it is safe to say normal rates cannot be tolerated and therefore the Fed will not allow them to occur.

The biggest question is whether officials will be able to make even one or two token hikes before having to reverse course and re-open the stimulus floodgates.

The last rate hike, a measly quarter percent in December of 2015, cratered the stock markets and immediately had officials back pedaling. Gold and silver prices soared. Investors should expect history to repeat this next time around.