Interestingly, the current price action in gold and silver seems to suggest that market has no need for top two precious metals. While the gold price spiked to almost $1,340 late Tuesday night when Trump began to lead in the Presidential election, it has continued lower to $1,226 on early Friday trading. 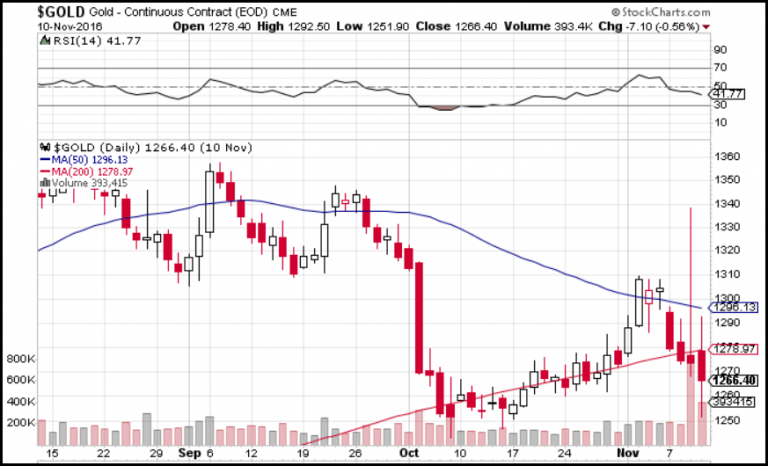 The gold price chart above shows the huge spike during early morning trading on Nov 8th. Of course, gold was behaving exactly as many in the gold community forecasted if Donald Trump won the Presidential election. However, later that day, the broader markets rallied into record territory while the gold price continued to fall. 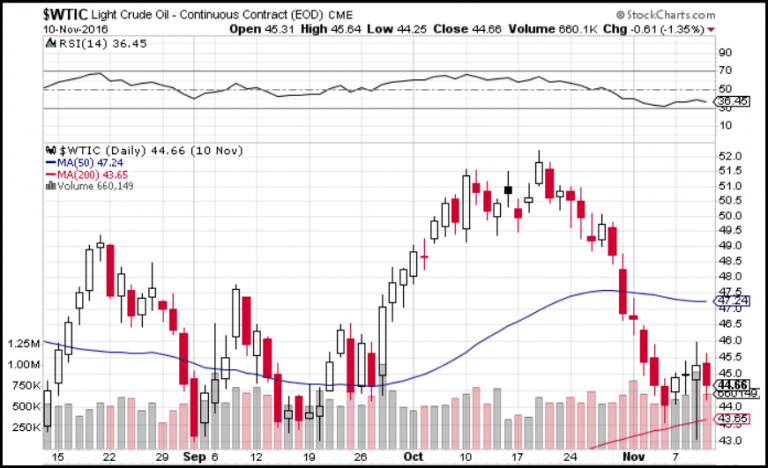 Normally the broader markets ride higher on the strength of the oil price. Not this time around. Furthermore, the base metal prices tend to follow the oil price. However, the copper price doesn’t seem to care about fundamentals anymore as it skyrocketed higher over the past three weeks: 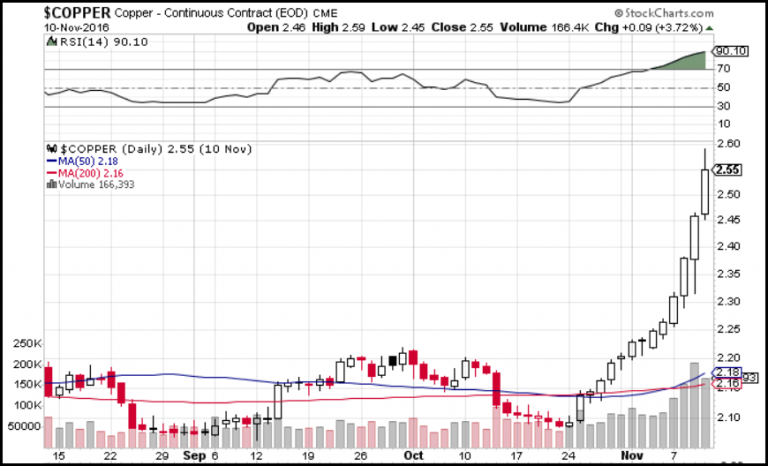 According to a Zerohedge article, Copper Is Having Its Best Week Ever As Chinese Speculators Run Amok (Again):

Copper has never, ever, risen at such a torid pace as this week. Blowing away any week’s performance of the last 30 years, copper futures are up almost 20% as hopes for US President-Elect Trump’s infrastructure spending extended its winning streak to an unprecedented 15 days in a row (up over 28%).

The price action in oil, gold, copper and the broader markets no longer make any sense whatsoever. This is due to the massive intervention by Central Banks. According to another article by Zerohedge, Central Banks Intervene, Scramble To Halt Emerging Market “Carnage”; Futures Slide:

However, after another night of a soaring dollar, the market no longer ignored the EM FX carnage, and overnight central banks from India to Indonesia stepped in to stabilize their currencies and the yen snapped a five-day losing streak as an Asian market selloff deepened on concern Donald Trump will pursue policies that spur capital outflows from developing economies and weaken their exports

“We are seeing carnage in Asian FX markets,” Robert Rennie, head of financial markets strategy at Westpac in Sydney, echoed our commentary. “It’s providing a very strong reminder that the S&P 500 is not the correct barometer of Trump-driven risk aversion — it’s Asian currencies.”

Basically, what the article is saying is that the strong U.S. broader stock markets aren’t a real barometer of a Trump Presidency, it’s the Asian currencies.

The situation in the global markets will continue to disintegrate not because of the impact of a Trump Presidency, rather due to the collapsing oil price and production going forward. While Donald Trump states he will make American great again, it will take a lot of energy to do it. Unfortunately, President elect Trump does not understand that the U.S. and world do not have the cheap and abundant oil to fulfill his lofty plans

That being said, the one positive aspect of a Trump Presidency, is the threat of a war with Russia has greatly diminished. I got a kick out of watching the anti-Trump protests because these people (for the most part) have no idea of how bad the “Establishment Party” would have been under a Clinton Administration.

I am not going to get into politics here, because most people will FOAM OUT THE MOUTH based on superficial and incomplete information. It is impossible to have an intellectual debate on politics, because the whole idea of politics today is to misinform the public with propaganda and lies.

Again, the one positive aspect of a Trump Presidency is that he will likely reduce the Russian and Syrian war threat. Normally, I don’t watch the Mainstream media, but I did for a few nights during the Presidential election. To watch talking heads on the MSM state that Trump supports a dictator like Putin, goes to show that the U.S. media no longer reports the news.

Any American who would take it upon themselves to do a few hours of research on the internet, would find out that it has been the United States, not Russia, that has been more to blame for most of the hostilities in the Middle East, Syria and Ukraine.

Enough time wasted on politics, let’s take a look at the increase of gold investment demand in 2016.

Gold Investment Demand Increased This Year, Especially The Day After The Trump Election

According to the data put out by the World Gold Council, global gold investment demand increased to 1,390 metric tons during the first three-quarters of 2016 compared to full year 2014 and 2015: 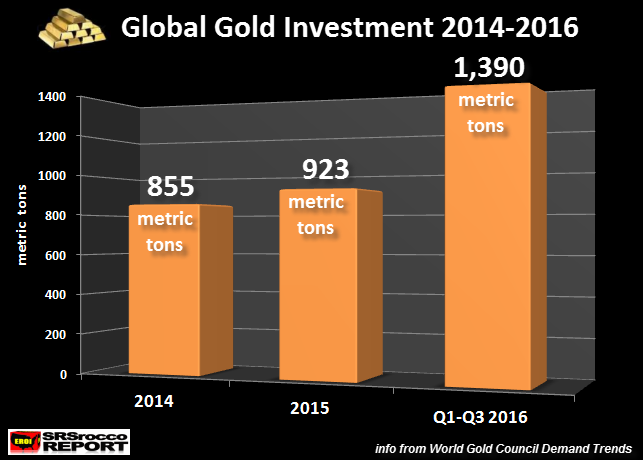 I understand that the World Gold Council is not reporting all gold investment as Koos Jansen explained in his excellent article, The Great Physical Gold Supply & Demand Delusion:

Gold supply and demand data published by all primary consultancy firms is incomplete and misleading. The data falsely presents gold to be more of a commodity than a currency, having caused deep misconceptions with respect to the metal’s trading characteristics and price formation.

While I agree with Koos that gold is being valued as a mere commodity instead of real money or a high-quality store of value, the increase in gold investment demand at least gives us an indicator that the situation in the gold market is changing.

For example, the U.S. Mint sold a stunning 15,000 oz of Gold Eagles the day (Nov 8th) after the U.S. Presidential election: 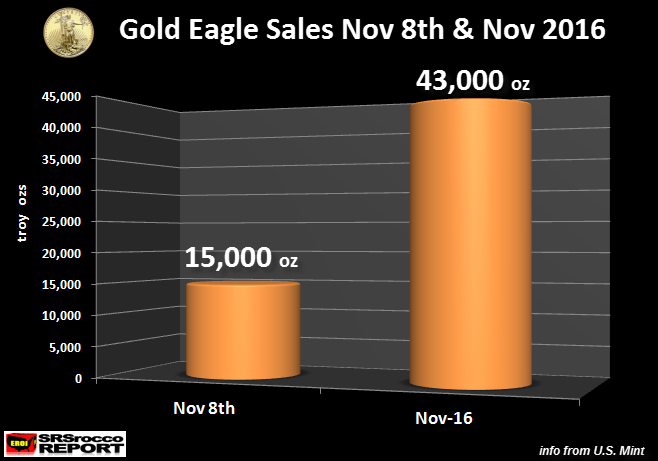 In one day, the U.S. Mint sold a third of the Gold Eagle total sales for the month of November. This one day Gold American Eagle sales of 15,000 oz is preview of the massive demand to come in the future.

While the gold price has been knocked lower the past few days, this is not at all an indicator of its real value. Nothing makes sense anymore in the markets as Central Banks scramble to deal with the increased volatility in the currency markets due to the election of Donald Trump to the White House.

The situation in the global markets will continue to disintegrate as the price and production of oil continues lower. This will totally destroy the ability for any government to paper its way out of this financial mess.

Owning physical gold and silver will turn out to be the best investment going forward, even though the current price action suggests otherwise.