Donald Trump promises to “Make America Great Again.” Whether he can do it remains to be seen, but the Federal Reserve Note “dollar” is certainly responding to his victory. Traders began swapping bonds for dollars the morning after the U.S. elections and they haven’t stopped yet.

The DXY index topped 101 on Friday – its highest level since early 2003. Beleaguered precious metals bulls are feeling the side effects. The surge in the dollar coincides with the retracement of a portion of the year’s price gains in gold and silver – although gold is still up close to 13% and silver is up close to 20% year-to-date.

The current challenge for metals isn’t just that the dollar is rising. 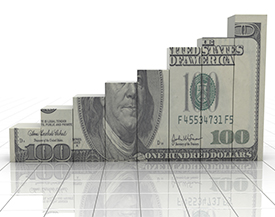 The dollar and bullion prices surged together following the Brexit decision in late June. The difference now is the fear trade. So far the action in the bond and currency markets has been relentless, but orderly. The safe-haven bid for metals just isn’t there right now.

In order for gold and silver investors to get a reprieve, one of two things needs to happen: a stall in the U.S. dollar rally or traders re-discover that all is not well in the global economy. There is no telling when either of those catalysts might show up to put a floor under metals prices. But here are a few items to watch for:

The action in bond markets could shift from orderly selling to a disorderly rout. The 2008 financial crisis illuminated a bubble in global debt. Central bankers managed to put a patch on it and kept blowing. Now it has become the largest bubble in history, swamping the entire world with debt levels never before seen. Someday it will go the way of all bubbles and pop, creating fear and discord in the markets.

Few people see the current selling in bonds as much more than a correction. Virtually everyone in the markets is planning for central bankers to be there as the buyer of last resort. Bond vigilantes are a thing of the past. Anyone seeking to punish governments and other irresponsible debtors by selling bonds and driving up interest rates moved on or went broke years ago.

Any wager that the current bout of selling in bonds is the precursor to a bond market collapse could backfire like so many times before. However, the bond market is worth watching. The selling pressure in recent days has been extraordinary.

To be sure, central bankers are not omnipotent. And the day is coming when markets return to pricing risk appropriately. The epic, artificial bubble in bonds will indeed deflate some day. Some believe we are seeing it start now. It’s possible, but we frankly doubt it.

Federal Reserve officials must be dismayed by the surge in the U.S. dollar and will intervene at some point. Metals investors aren’t the only people having trouble finding the bright side of a dollar hitting near 14-year highs against other perpetually devalued fiat currencies and borrowing costs rising sharply. Janet Yellen and her cohorts foolishly believe inflation – i.e., a weaker dollar – and more borrowing is the answer to what ails our economy. No one should expect them to simply stand by and watch.

The movements in currency and bond markets put Janet Yellen and the FOMC in a bit of an awkward position. They spent the last two years signaling their intent to raise rates. Now markets have pre-empted them, and rates may already be higher than officials intended.

Officials might get away with a token rate hike or two. Or they might accelerate the sell-off in bonds, push the dollar even higher and throw a wrench into the stock markets.

Metals investors should never forget the inflation and debt-loving Keynesians running the Fed are among the best reasons to own precious metals, even if it has not felt that way in the past few weeks.