Investment demand for Gold Eagles surged during the last day in November pushing sales to a new monthly record. Not only did Gold Eagle sales for November reach a new record high for the year, it surpassed sales during the same month last year by 52%.

It seems as if investors are once again taking advantage of lower gold prices. I had planned to publish the article on Wednesday (last day of the month) showing that November sales hit a new record high, but the U.S. Mint updated their figures yesterday reporting another 20,000 Gold Eagles oz were sold on the 30th. 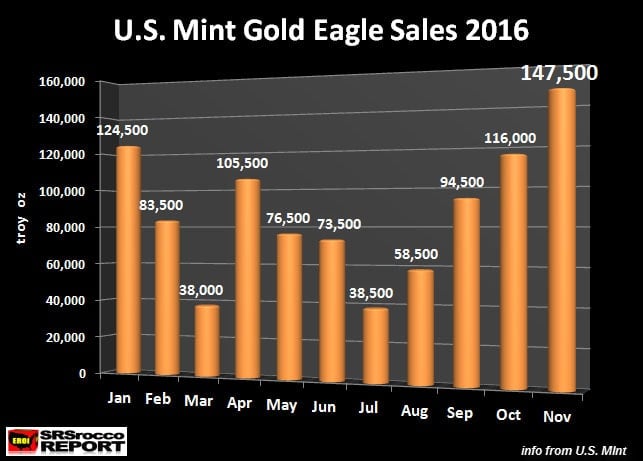 Even though the price of gold has sold off, some investors take this as an excellent buying opportunity. Again, to see 20,000 oz of Gold Eagles sold in one day suggests that some investors aren’t following the negative sentiment that the “Gold trade is over.”

One of the benefits of running one’s own website is the ability to say or write whatever comes to mind. I have no producer or owner over my back censoring what I write or say to keep either advertisers or investors happy. This is by far one of the most gratifying aspects of writing articles for the SRSrocco Report site.

That being said, I have to share my opinion on the recent change in precious metals sentiment. I have heard on several interviews and from other sources, that many of the hardcore precious metals investors have “thrown in the towel.” I hear of people selling their gold and buying stocks or investing in the next best industrial metal… PALLADIUM.

Of course, people are more than free to do whatever they desire, but I have to say, selling all of one’s gold and buying Palladium or jumping into the stock market is the most STUPIDEST thing a hard asset precious metals investor could do. While I see no problem with an individual, holding substantial gold resources, selling some of their yellow metal to buy Palladium for a short-term trade, selling all of ones gold to get into the next best TRADE OF THE CENTURY in Palladium or in the stock market is like going all in on the 17th century Holland Tulip Bubble.

Nothing has changed since the 17th century Tulip Bubble that also destroyed the ability of people to act rationally. At the peak during the Holland Tulip Mania, some tulips were selling for 10 times the annual income of a skilled craftsman (Source: wikipedia)

According to Wikipedia about the Tulip Mania:

…. the growing popularity of tulips in the early 17th century caught the attention of the entire nation; “the population, even to its lowest dregs, embarked in the tulip trade”.[6] By 1635, a sale of 40 bulbs for 100,000 florins (also known as Dutch guilders) was recorded. By way of comparison, a ton of butter cost around 100 florins, a skilled laborer might earn 150 florins a year, and “eight fat swine” cost 240 florins.[6] (According to the International Institute of Social History, one florin had the purchasing power of €10.28 in 2002.[35]) 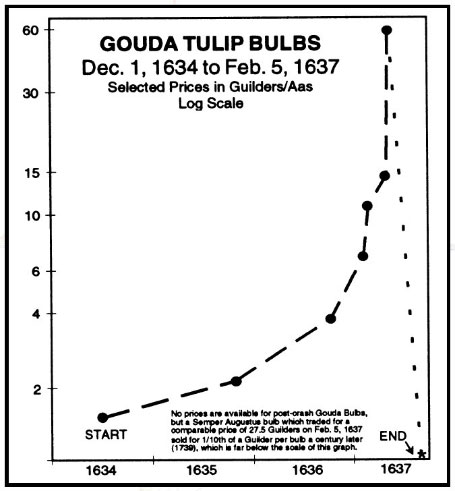 As we can see from the chart, investors lose all economic and financial sense when asset prices start to go insane. Instead of using some restraint and wisdom, they drop all reason and jump in on the rising bandwagon.

Again, I have heard that a percentage of precious metals investors are throwing in the towel because they believe Trump will make American great again, so there is no need for owning gold. Sure, maybe owning some silver would be okay due to the increased industrial consumption, but why is the silver price selling off???

The reason precious metals sentiment has fallen is due to the fact that many investors look at the world too NARROWLY. Each week a different news story or event changes how many people think and their reactions. This is the typical FICKLE nature of the public.

In 2006, I realized from my research that the collapse of the U.S. economy and financial system was going to happen. So, I sold my business and moved out to the country. Not only do I believe in owning precious metals, I also believe that it is prudent to be able to grow as much as ones own food.

So, I wasn’t surprised in 2007-2008 when the U.S. and global markets nearly disintegrated. However, I was surprised by the amount of monetary printing and fiscal insanity that the Central Banks have embarked upon since 2008.

Thus, the propping up the markets by the Fed and Central Banks have postponed the inevitable. Thus, the NAYSAYERS and the BELLY ACHERS have taken the higher ground by criticizing the precious metals analysts for being so wrong on their forecasts, while at the same time totally disregarding the massive paper and digital monetary intervention.

Lastly, the one thing Central Banks can’t do, is stop the LAWS OF NATURE…. THERMODYNAMICS.

Each year, according to thermodynamics, it becomes more expensive to produce oil, nature gas and coal. However, as the price of oil continues to trend lower over the next five years (plus), U.S. and global oil production will plummet. While the Oil Industry will not go down without a fight, they will likely do whatever they can to continue producing oil at a loss. Thus, they will steal energy from wherever they can get it.

Unfortunately, this will not stop the coming SENECA CLIFF life decline of the global markets and financial system.