From Power Currency to Power Money*

On a Tuesday evening in early November, Prime Minister Narendra Modi, who had been elected 2 years earlier on the slogan "Minimum Government, Maximum Governance" stunned India's 1.3 billion people by announcing that their 1000 ($15) and 500 rupee notes would be "demonetized" (removed from circulation) and replaced with new 500 rupee versions by the end of the year.

All they had to do was take their old notes to the banks - which were closed the next day – and deposit them – as long as there was a "legitimate" explanation for the cash – (600 million Indians do not have bank accounts).

The New "Modi" Operandi in the War against Cash

The dictionary defines the Latin phrase modus operandi as "a particular way or method of doing something, especially one that is characteristic or well-established... It is also used in criminal profiling where it can help in finding clues to the offender's psychology."

Billed by proponents as a way to cut down on the drug trade and bring "dark money" into the open, the reality of banning large denomination notes, if not all paper currency, is considerably different. It is detrimental to the vast majority of a country's citizenry, who are, by and large, honest people simply trying to make a decent living. Thus the government's methodology – and ultimate goals – come into view.

It stands jurisprudence on its head. Victims go from being "innocent until proven guilty" to the reverse. The mere possession of "excessive amounts" of paper currency becomes a presumption of guilt. The move toward universal digital transactions brings forth a specter of the much-abused civil asset forfeiture laws – an online version on steroids – where you are deprived of your money and possessions without ever being charged with a crime.

Our individual sovereignty is tied directly to our ability to move freely about. When every step we make is tracked by the bank/government our sovereignty is gone forever. Freely trading commerce is one of the cornerstones of human sovereignty. Without the ability to conduct business with whom we wish, when we wish, we are nothing more than cattle to the overlords of the land...

If you have any misguided notion that a cashless society is not coming, just keep telling yourself that every time you use a debit card, credit card or your phone for your next purchase. With the elimination of cash we effectively hand over our individual human sovereignty to the banks and the government.

Jayant Bhandari, an institutional investors' advisor, who grew up in India, writes about the implications of India's stunning attempt to transform the monetary landscape for one out of every six people on the planet, saying,

There are moral dilemmas galore. But this had to happen in a society run by rulers who have absolutely no sense of morals, (or) reason, not to mention respect for private property. It is also clear that Modi has to take more and more increasingly repressive steps to keep people from taking protective measures. India will rapidly become a police state.... this will go down in the history books as one of the most naïve, least thought through policy decisions ever, a massive man-made disaster. 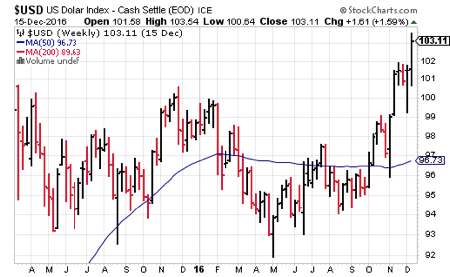 The upside-down world (of near-zero to negative interest rates) we are now living in has become our reality. This is one more reason you are now seeing a run toward the dollar. As the nearby USDX chart shows, is now trading at 12 years highs. What I have long taught - in the footsteps of the late John Exter's inverted gold pyramid work - is that a "run to the dollar" will take place before the real run to gold gets fully underway. As you can see, that "asset class" occupies the last layer above gold itself.

We are now in the final step before another 1% of the population takes action by moving into gold and silver. When the run starts, it won’t be because 90% wake up and say "Wow, I need precious metals to protect my financial wellbeing!" What will happen is that simply another 1 or 2% will finally see the light and start to buy. Since the physical gold market represents less than a single percent of all financial assets, with silver at only about .02%, it won't take a huge amount of new money to put the paper price at stratospheric levels...and that’s what will take place.

When people lose trust in the dollars they're holding, the run into gold will be one for the financial record books. The dollar will keep rising until hit hits a major, unsustainable peak, and then begins to slowly roll over. After awhile, the momentum of that declining trend will build toward terminal velocity, accelerating until the dollar's value hits the ground. While that is taking place, more and more people will be motivated to move into the precious metals. All at once, a demand flood will be attempting to get through a very narrow supply door. At that point, you will either have acquired some metal for financial protection in your possession, or you'll be left standing in line...empty handed.

What is the Currency Power?

We believe the terms "power currency" (paper money) and "power money" (gold and silver) were coined by Trace Mayer*, a leading monetary and blockchain expert on Bitcoin. Applied to Exter's inverted pyramid, they provide excellent visual definitions of the two asset classes which have – throughout history – jockeyed for acceptance on the part of governments and the governed alike. And so far, as the late Richard Russell wrote a few years ago, "In experiment after experiment with fiat money, gold has always turned out to be the last man standing."

Make no mistake – The loosely (for now) coordinated efforts in the "war against cash" of Sweden, Australia, France, Venezuela, and now India – with philosophical support from "intellectual" elements of the U.S. financial community are quickly swinging into gear. Spain has just announced that effective January 1, 2017, it would prohibit cash transactions in excess of 1,000 euros (c. US$1,080)

How rapidly these policies reach American shores and attempt to become the norm here will be determined in no small measure by the level of acceptance by India's and European citizens of these draconian monetary policies.

While you ponder whether or not the Benjamins and Grants in your pocket should continue circulating – consider that what you are able to buy today with a $100 bill, took less than $20 to acquire in 1970. As you read this essay, Indians are willing to pay the equivalent of $2,200 per ounce of gold, in order to get rid of their "power-less currency" in exchange for "power money" – gold and silver.