Tens of millions of Americans and their employers pour money into pension plans each month, counting on those funds to grow and to be there when needed at retirement.

But a time bomb awaits. The bulk of U.S. pension funds are dangerously underfunded, and the assets are often invested in securities that have bleak prospects for providing income that keeps up with a general decline in purchasing power.

A pension plan requires an employer to make contributions into a pool of funds set aside for a worker’s future benefit. In 1875, when the American Express Company established the first private pension plan in the United States, the face of retirement was fundamentally changed. Before that time, private-sector pension plans did not exist, as most employers were small “mom-and-pop” businesses.

The innovation at American Express caught on. By 1929, 397 private sector pension funds were in operation throughout the United States and Canada. As of 2011, according to the Bureau of Labor Statistics, 18% of private sector workers are covered by pension plans. At the end of 2015, the value of U.S. pension funds was $21.7 trillion.

Millions of Americans will rely on pensions once they’ve reached the age of retirement. Pension fund managers have a fiduciary duty to safeguard funds against foreseeable risk. With the practices of today’s Federal Reserve, there is no risk more foreseeable than inflation, but these fiduciaries are not fulfilling their duty to protect against this significant risk by investing in assets which are specifically suited to defend against the perpetual loss of the dollar’s purchasing power.

Chief among these assets are physical gold and silver, the most reliable inflation hedges from time immemorial.

Nothing Is Certain Except Death, Taxes, and Dollar Devaluation 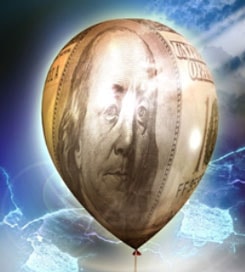 In today’s uncertain times, few things are as certain as the devaluation of the dollar. Having lost more than 95% of its value since the creation of the Federal Reserve in 1913, America’s unbacked fiat currency has a 100-year track record of declining value year after year. There is no reason to expect this trend to reverse, and the possibility of a total collapse of the dollar at some point cannot be ruled out. This is important because of the dollar’s inverse relationship to the price of gold.

As the unbacked Federal Reserve Note continues to be abused and devalued, it becomes clearer every day that pension funds should increase their precious metals holdings.

According to the Asset Allocation Survey by the U.S. Council of Institutional Investors, only 1.8% of pension fund investments are in the broad commodities category, which includes monetary metals. That means only a fraction of 1% in pension assets are held in gold and silver.

Whether it is an individual investing $1,000 or a fund manager in charge of investing millions of dollars, risk management is crucial.

Fund managers typically will not invest in extremely risky investments for fear of losing their investment, and potentially, their jobs. Conventional wisdom is that government bonds are paramount in safety and security.

But these bonds, as well as the Federal Reserve Note “dollar” itself, are backed by nothing more than the full faith and credit of an insolvent U.S. government. Washington D.C. has accumulated astronomical debts of more than $20 trillion and total long-term entitlement obligations now top $100 trillion. Officials will only be able to “meet” these long-term commitments by inflating them away. That is why money creation at the Federal Reserve has become standard operating procedure. Gold, on the other hand, appreciates as the dollar’s value falls, not to mention offering resilience to financial and political crises.

The financial establishment remains hostile to gold, but influential people are making the case for larger gold holdings. Alistair Hewitt, head of market intelligence at the World Gold Council, said, “Unless investors are willing to accept a loss-making investment strategy, they may need to consider increasing their holdings of gold. We believe this should resonate especially well with pension funds and foreign managers whose investment guidelines are typically stricter and who hold a large portion of bonds in their portfolios.”

Getting fund managers to include physical gold in pensions is a difficult challenge. While they have a fiduciary responsibility to protect and grow their clients’ investment, most prefer to stick with the conventional wisdom and avoid bucking the system – but there are other pressures as well. Guy Christopher writes, “Precious metals in your possession have no counterparties and no continuing fees and commissions, unlike the thousands of investments brokers sell. Once you own gold, that part of your wealth and your future is out of Wall Street’s hands.”

Look to Texas for the Blueprint on Gold-Invested Pension Funds

The Texas Teacher Retirement Fund and the University of Texas own nearly $1 billion in physical gold, which will soon be transferred from Wall Street vaults to a brand-new depository in the Lone Star State thanks to the recently passed Texas Bullion Depository legislation.

Shayne McGuire, portfolio manager of the Gold Fund for the Teacher Retirement Fund of Texas said that “one of the main reasons we considered gold was the diversification benefits it provides to portfolios dominated by equities, as most pension funds are.”

While most pension fund managers shy away from gold, they do so at their own risk and the risk of their pensioners. As a non-correlated asset to bonds, stocks, and other paper-based investments, precious metals are key to true diversification. It’s time for pension fund managers to break out of their Wall Street groupthink and include a meaningful allocation to physical gold and silver bullion for protection against inflation and financial turmoil.