Gold and silver are off to a good start in 2017, advancing again last week into Donald Trump’s inauguration.

If recent history is a guide, this year could bring some nice gains in precious metals. Bloomberg reports there have been gains in the gold market in the year following 6 of the past 7 presidents’ first inauguration. The average gain is 15%, dramatically outperforming the S&P 500 which loses, on average, about 1%. 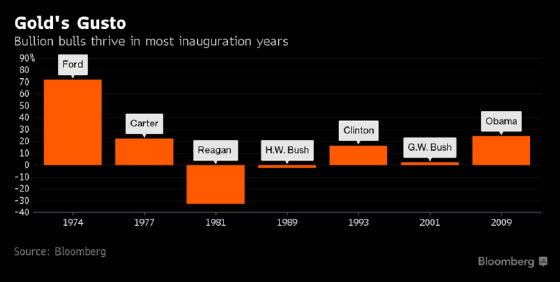 Last week’s gains in metals were driven largely by weakening in the Federal Reserve Note, aka the dollar. The dollar lost ground despite some hawkish remarks from Janet Yellen. Her speech was overshadowed by comments from Donald Trump. He expressed concerns about what the strong U.S. dollar means for the U.S. balance of trade – particularly when it comes to China. The DXY index fell back toward levels last seen in early December.

This week, investors will continue watching events in Washington DC. Trump is expected to sign more executive orders today. There will also be economic data to digest, including the first estimate of 4th quarter GDP, which will be published Friday.

Is The Fed Going to Leave Trump Holding the Bag?

Janet Yellen wants you to know the U.S. economy is very near full employment, and she sees inflation ticking back upward toward the target rate. She expects government statisticians will soon peg inflation at 2 to 3% – the “ideal” rate at which your cash diminishes in value each year.

Yellen shared these sentiments and made the case for gradually raising interest rates during a speech last Thursday. Up until Trump’s election, Yellen had been all talk and very little action. The Fed hiked interest rates for just the second time in almost a decade in December. Most now expect 2 to 3 rate hikes this year and a similar number again in 2018.

The biggest dove ever to take the reins at the Fed is sounding pretty hawkish. What makes her rhetoric interesting now is the timing.

Stimulus-addicted markets aren’t going to like interest rates moving higher. Neither are the debt junkies in Congress. They will have to contend with the havoc that higher borrowing costs play with the federal budget. The question has always been whether or not central planners at the Fed could stomach the excruciating withdrawal symptoms.

Prior to last fall’s election, the answer was “no.” Yellen stayed the course on zero interest rates well into the economic recovery. She didn’t think the Fed provided enough stimulus in response to the last recession, and advocated for even more radical monetary policy including negative interest rates.

Since Trump’s victory, Yellen has delivered one rate hike, and she is signaling more are on the way. If she is finally reversing course, it may have more to do with politics than a shift in philosophy. Yellen took some criticism from Donald Trump leading up to the election. And the Wall Street banks that own the Federal Reserve supported Hillary Clinton.

If zero interest rates can’t last forever and the party in U.S. equity markets must someday end, the banking class probably can’t think of anyone better than Donald Trump to wind up holding the bag. The rally in stock prices stalled following the December rate hike. If stocks begin selling off and the Fed remains committed to hiking rates, it will be revealing.

We would just offer one word of caution to Yellen and the Fed, if they are indeed planning to deflate bubbles and pin the blame on Trump. They have something in common with the mainstream media. The credibility of both institutions rests upon the myth that they are free and independent. The media attacked Trump and wound up embarrassed and exposed – the myth completely shattered. The same treatment could be in store for the Fed.