PAPER vs. PHYSICAL: The Amazing Amount Of Leverage In The Silver Market

While many precious metals investors realize the massive amount of paper trading leverage taking place in the gold market, they should see what is going on in the silver market. In a previous article, I provided data showing that an amazing $9.8 trillion of notional gold paper trading took place on the world’s exchanges in 2016 versus $42 billion in actual physical gold investment. This was a paper to physical ratio of 233 to 1.

However, the amount of paper trading leverage in the silver market is much higher than that. 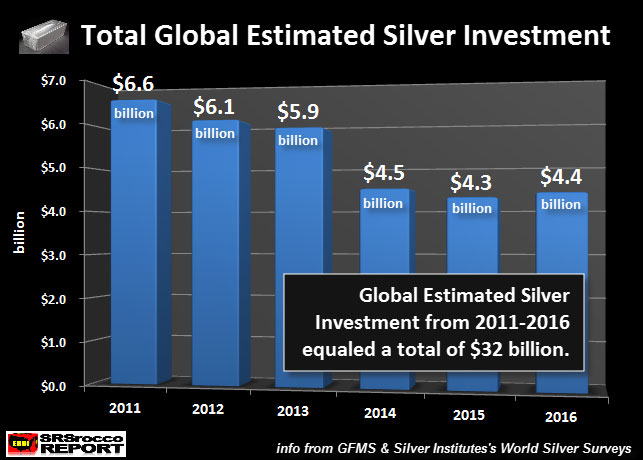 That’s correct. When we add up all the global silver investment demand last year, it adds up to a measly $4.4 billion. It was nearly ten times less than all physical gold investment in 2016. The analysts who wrote 2017 World Silver Survey, arrived at the $4.4 billion figure by using the following data:

By adding up total Physical Bar investment of 83.6 Moz, Official Coins & Medals of 123.2 Moz and ETP (ETF) Inventory Build of 47 Moz and then multiplying it by the average silver spot price of $17.14, it totaled $4.4 billion.

Even when the silver price reached a high of $49 in 2011, total global silver investment was only $6.6 billion. Looking over the market in the past six years, the total $32 billion of silver investment from 2011 to 2016 is nothing when we compare it to the staggering amount of Central Bank asset purchases. According to a recent Zerohedge article, Why “Nothing Matters”: Central Banks Have Bought A Record $1 Trillion In Assets In 2017:

A quick, if familiar, observation to start the day courtesy of Bank of America which in the latest overnight note from Michael Hartnett notes that central banks (ECB & BoJ) have bought $1 trillion of financial assets just in the first four months of 2017, which amounts to $3.6 trillion annualized, “the largest CB buying on record.” 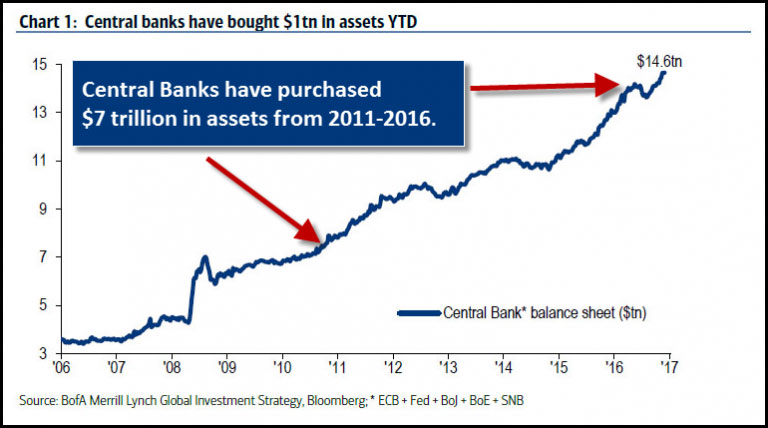 Regardless, $7 trillion is a lot of money when we compare it to the pathetic $32 billion invested in silver over the same period. If we just took $100 billion of that $7 trillion and placed it in silver, it would have quadrupled the amount of global silver investment from $32 billion to $132 during that 2011-2016 time period. A quadrupling of silver investment demand, would have pushed the price of silver, WAY ABOVE the peak $50 price.

By the Central Banks propping up the STOCK, BOND and REAL ESTATE markets, the value of silver (or gold) is being severely depressed. And of course, to keep investors from finding out about SILVER’S HIGH QUALITY STORE OF VALUE, the price continues to be capped by the massive amount of paper trading leverage.

How Much Paper Trading Leverage is in the Silver Market?

Let's look at the following chart: 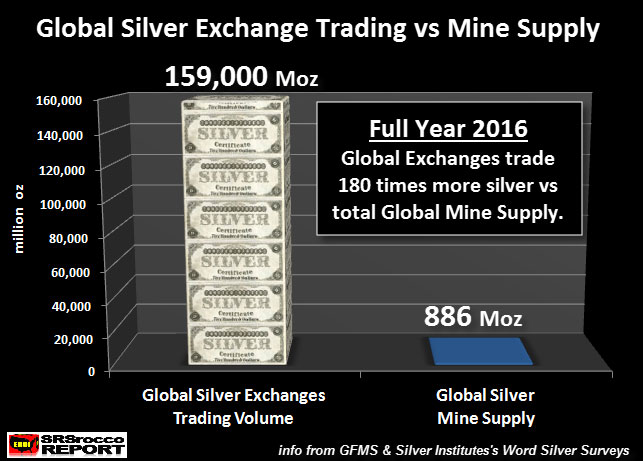 If we look at the ratio of global notional paper silver traded last year compared to actual silver investment, it was more than double that of gold: 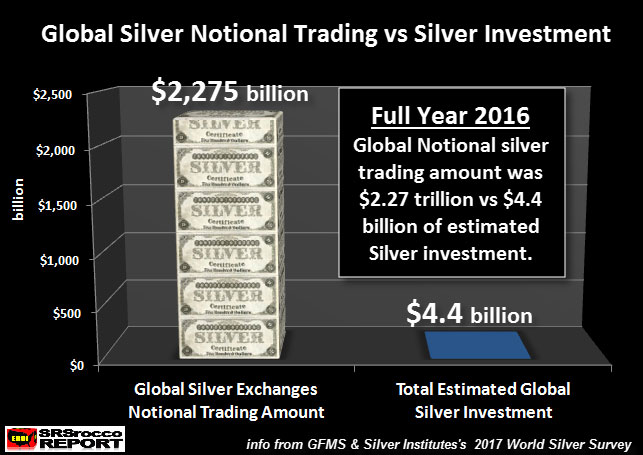 Now, this 517/1 notional paper trading ratio to physical silver investment in 2016 does not take into account any of the huge OTC market where a lot of silver is traded and there are no quantifiable statistics to the amount or degree.

Furthermore, crypto-currencies are a likely a GOOD INDICATOR of what will take place in the gold and silver market when investors realize most STOCKS, BONDS and REAL ESTATE values will continue to implode as the U.S. and Global Oil Industries disintegrate.

The gold and silver prices are being capped because paper contracts can be added as more funds move in. However, crpyto-currencies do not have this problem because the amount of Bitcoins, as an example, are limited.