How Would Markets React If Trump Is Actually Forced Out of Office?

Donald Trump’s policy agenda – and his very presidency – are in jeopardy...

...at least if you believe the chatter on cable television.

Yes, for weeks now, the big media outlets have been stirring up talk of impeachment. One narrative after another – Russia, Comey, Kushner, etc. – yet no conclusive evidence of any “high crimes and misdemeanors.” 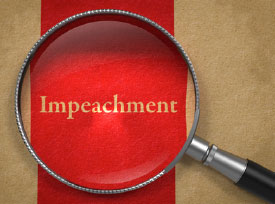 Still, Democrats in Congress smell blood in the water… and they have readied articles of impeachment for introduction as soon as an opportunity presents.

But investors don’t seem particularly concerned about the implications of political turmoil intensifying in Washington.

The only hint of politically driven jitters all year came on May 17th. The Dow Jones Industrials slid by nearly 400 points as reports surfaced that former FBI Director James Comey was asked by President Trump to stop his investigation of former national security adviser Michael Flynn.

A few days later, the Dow rallied back up to its previous highs. The traditional safe-haven of gold is up modestly on the year but has yet to see any major sort of panic buying. Perhaps investors don’t believe the Trump presidency is at risk – or perhaps they don’t think it matters much if Trump gets pushed out of office.

Markets Appear Unconcerned by the Theatrics in Washington

What would a Nixonian crisis in Washington mean for Wall Street and, more importantly, main street? Probably not a whole lot in terms of major trends in the economy and in asset prices.

Consider the recent history of presidents who have gotten themselves into trouble. Neither the resignation of Richard Nixon nor the impeachment (and subsequent acquittal) of Bill Clinton caused the stock market to crash. Precious metals markets didn’t move much around these momentous political events, either.

President Nixon resigned on August 8, 1974 with gold trading at $152/oz. Gold began the year at $117 and finished at $195/oz. Nixon’s resignation occurred within a major year-long rally and doesn’t seem to have altered its trajectory.

Far more significant than Nixon handing over the keys of the White House to Gerald Ford was Nixon’s fateful decision on August 15, 1971 to close the gold window. 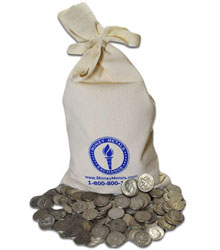 Previously, U.S. dollars had been redeemable in gold by foreign countries. But the Nixon administration feared a run on U.S. gold reserves.

Henceforth, the U.S. dollar would be a fiat currency with no formal link to gold. As a consequence, inflation fears began to build – slowly at first, but then manically by 1980 with gold prices spiking to $850/oz.

The Watergate scandal that made Nixon infamous didn’t really have anything to do with what unfolded in markets the ensuing years.

The real Nixon legacy is what happened to the dollar after he ended its redeemability in gold. The consequences of the dollar’s lost status as a hard currency are still playing out.

Contrary to popular misconceptions, Nixon wasn’t actually impeached. But Bill Clinton was. The House of Representatives initiated articles of impeachment against President Clinton on December 19, 1998. On February 12, 1999, the U.S. Senate voted to acquit Clinton and leave him in office.

Around that period, gold prices were in a long bottoming out process after having been in a bear market since the $850/oz peak of January 1980. From the time Clinton was impeached to his acquittal, gold essentially did nothing but meander around $290/oz. Interestingly, silver popped from $4.95 to $5.65/oz, and the S&P 500 also made slight gains.

The bottom line is that political turmoil doesn’t necessarily translate into market turmoil or even a detectable market reaction. But major policy changes (or failures) can have significant short-term and sometimes long-term effects on markets.

Trump entered the White House with a bold reform agenda on a scale that hasn’t been tried since Ronald Reagan had been sworn in 36 years prior. Corporate America wasn’t fully aboard the Trump train, but it certainly wants to see the regulatory and tax relief that could generate higher rates of economic growth. Investors seem to be pricing in at least some partial successes for the administration’s policy goals.

So far, the White House hasn’t gotten much help from Congressional Republicans. President Trump’s penchant for generating controversy has distracted from his policy aims and eroded his legislative leverage. GOP Senators John McCain, Lindsey Graham, and John Cornyn each declared Trump’s recent budget proposal, which calls for cuts in some domestic agencies and programs, “dead on arrival.”

Career lawmakers never take well to requests for spending cuts. As Ronald Reagan once observed, “No government ever voluntarily reduces itself in size.

Government programs, once launched, never disappear. Actually, a government bureau is the nearest thing to eternal life we’ll ever see on this earth!”

Only a president who is truly an outsider and willing to fight the D.C. establishment at every turn can have any hope of fundamentally changing it. Donald Trump vowed to “drain the swamp” but is so far having little success.

If he were to resign or be forced from power by Congress, then Vice President Mike Pence – a former member of Congress – would become the Commander in Chief.

We doubt Trump has anything to worry about – at least in terms of any real possibility of being forced from office. But either way, the White House will remain Republican for at least a few more years.

During the last period of Republican rule under George W. Bush, precious metals vastly outperformed stocks. There is a good chance that metals will resume leadership when the trumped-up hype and hope for U.S. stocks finally dissipates.