Could Silver Be Winding Up for a Big Move? 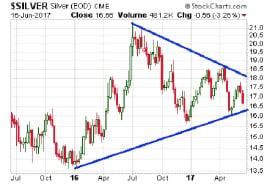 As the trading range gets narrower and narrower, it sets up a resolution in the form of a very strong directional move one way or the other.

A few more weeks of consolidation are still possible before a decisive break out from the pattern.

Yes, China Is a Currency Manipulator – And the U.S. Banking System Is a Metals Manipulator

Fighting the Fed (and the Crooked Banks) by Holding Gold