Gold and Silver Are "Asymmetric" Trades

An asymmetric trade is a situation where investing a relatively small amount of money holds the potential of yielding a profit many times the amount of the original sum at risk. In other words, where the risk to reward is skewed massively in the direction of reward.

This took place recently with Bitcoin (BTC). Is this conceptually different from bets made years ago on Microsoft, Cisco, Amazon, or Facebook, which yielded hundreds of percent profit to intrepid investors? Does it have relevance to the possible returns during the next few years for those who hold physical gold and silver?

The current "mania" in the cryptocurrency space – most notably BTC and Ethereum (ETH), along with a few other "app coins" – offers an in-future lesson for a similar setup in the precious metals. (For more on the above topic, see "The Blockchain: A Gold and Silver Launchpad?"

First: This may be the first time ever that an investment "story" has had the ear and investment dollars of a global audience on a simultaneous basis. Individual investors, hedge funds, businesses, and even countries, are sending a torrent of funds, with the effect, to paraphrase Doug Casey's famous remark, of "trying to push the power of the Hoover Dam through a garden hose." 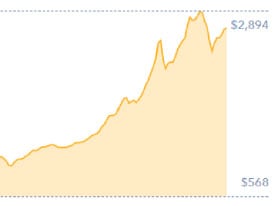 At this point, trying to use technical analysis, Elliott Waves – or common sense – in predicting when and how this moon shot is going to end, or even level out, is of little help. Taking some money off the table of a large position still makes sense. But "going to cash" with the idea of getting back in might become a tactical – or even strategic mistake.

In January, 2017, ETH could be had for $10 each. By $50, the charts and many soothsayers said that it was "grossly overbought." Time to cash out? Today ETC sells for $328 each. Can you predict at what price level this will end? Not I. During a bull run of indeterminate length and height, losing your (core) position can knock your profit-making efforts to the curb.

This is exactly what metals' and miner-holders will face as the next leg(s) of the secular bull run in gold and silver starts moving upward in a sustainable manner. The temptation to sell out at 3-4x will be overwhelming – especially for those who bought at higher levels and are looking for an excuse to "get out at break-even."

In order to ride the tiger for as long as possible, you will need to have decided beforehand what part of your holdings are defined as "core" – insurance and longer-term investment-related, versus "speculative" – selling into great strength, in order to take profits and "play with the house's money."

Without having a plan early on, you WILL end up selling too soon.

Second: Because of the Internet's power to instantly broadcast information, good or bad, the time it takes for this kind of price run to get underway and rocket off into space has been greatly compressed. It took over two decades for Microsoft to "do its thing." Amazon? Arguably about 15 years.

Apply this reasoning to the precious metals. 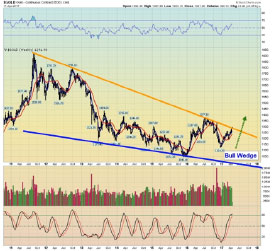 This report is not about how to "make a killing" on bitcoin. It IS about applying the same kind of thinking to the metals.

What if the new factor of digital metals become wildly successful in the coming years and adds to the already strong demand against finite above-ground holdings? This could cause gold and silver prices to go through the roof… just as new supply from the mines goes into a tailspin.

The coming bull run in the metals – because it too will be "globally attended" will be taking place in a sped-up investing environment, and with the tailwind of a "digital metals' kicker" – could offer the same kind of wildly unbalanced asymmetric opportunity currently being witnessed in the cryptocurrency space.

Is Your "Picture" Big Enough?

May 22, 2017 was the seventh anniversary celebration of "Pizza Day." It may have been the first successful trade of BTC for something "tangible" – in this case, two pizzas from a Papa John's franchise. Laszlo Hanyecz wrote, “I’ll pay 10,000 bitcoin for a couple of pizzas… like maybe two large ones, so I have some leftover for the next day — I like having leftover pizza to nibble on later.”

Hanyecz can be forgiven back then for not comprehending the potential this new vehicle might someday offer. Still, we can learn from his personal outlook.

How much would you pay for this pizza?

And we can learn from the person who sold Bill Gates an operating system for a pittance; the wealthy investor who refused to make a $10 million initial seed loan to a startup operation called Home Depot; or the financier who kicked out the Google founders when they sought a loan for less than one million dollars.

We need to make sure our minds are open enough to "allow" for whatever the future might have in store for our investment and insurance positions in the precious metals' space.

This is not about mindlessly holding an entire position indefinitely for "the long term," but rather keeping in mind that the potential gain could be all out of proportion to what we now think is possible... and acting accordingly.

Do you suppose that a few short years ago, anyone in Venezuela thought that having just one ounce of silver would one day be exchangeable for 6 months of food, or for an ounce of gold... a house? I didn't think so. 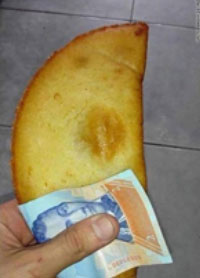 But just to be fair, the bolivar fuerte – "strong bolivar" currency – in spite of thousands of percentage point devaluation per year, still does have some value... as a napkin, which the adjacent picture that has since gone viral shows.

The moral of this story is that you should continue to exchange some of what David Morgan has so famously called "paper promises" for more physical gold and silver – and if you're still on the fence about getting started, get a move on!

Don't be wishin' and hopin' at $40 silver that you should have done something at $17, or worse yet, instead of getting invested now, say... "I'll just wait for a correction."