WHEN THIS MASSIVE BUBBLE POPS... What Will Happen To The Precious Metals?

As the Mainstream financial media continues to promote the biggest market bubble in history, only a small fraction of investors are prepared for the disaster when it finally POPS. The markets are so insane today, it seems as if fundamentals don’t matter any more. However, they actually do if we look at the numbers closely.

In order to invest in the correct assets going forward, one must choose between those with a low RISK and high REWARD versus assets with a high RISK and low REWARD. While this may seem like common sense, I can assure you, the market makes no sense whatsoever today. And most investors are doing quite the opposite. Go figure.

If we look at the following charts in this article, we can clearly see which of the following assets, the DOW JONES, GOLD or SILVER, enjoy the lowest risk and highest reward. 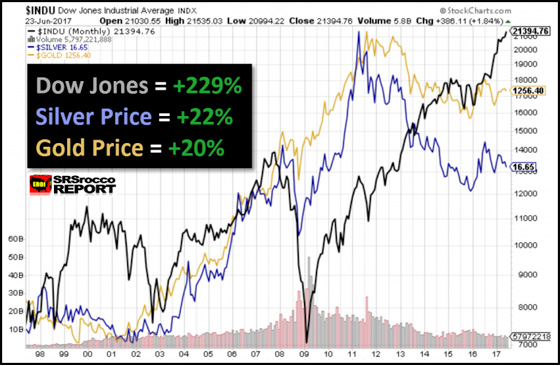 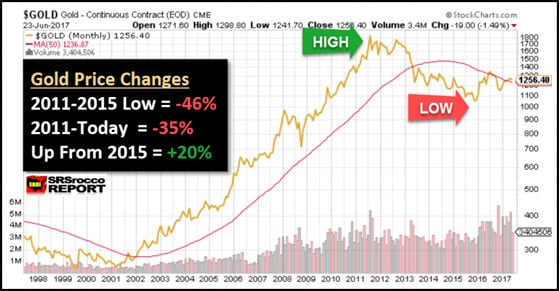 Looking at the silver chart, its price movement is much more volatile than gold. The silver price fell a whopping 73% from its peak in 2011 to its low at the end of 2015. Currently, the silver price is still 66% below its 2011 high: 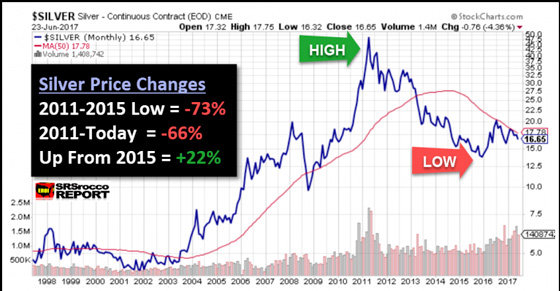 As I already mentioned, the silver price is only 22% up from its low in 2015. Now, let’s look at the Dow Jones Index: 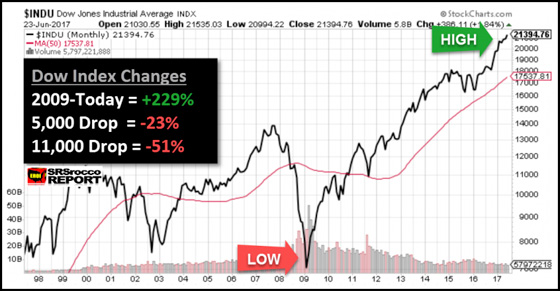 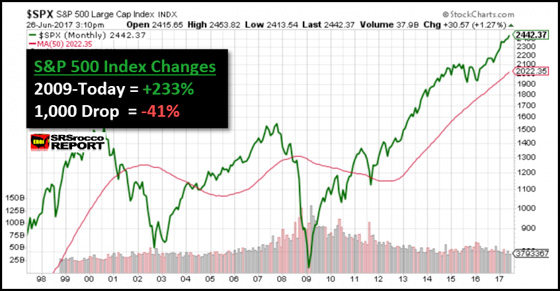 You will notice that the Dow Jones and S&P 500 charts are nearly identical. So, what happens to one, will happen to the other. To determine the fair value of the S&P 500, we look at the Schiller PE Ratio. Basically, the Schiller PE Ratio (PE = Price to earnings ratio) is defined as the price (Index price) divided by the average ten years of earnings…. adjusted for inflation.

This historical Schiller PE Ratio mean is 16.8. That means S&P 500 price is 16.8 times the average ten years worth of earnings. So, if the Schiller PE Ratio has averaged around 16.8 in its history, what is the ratio today?

Furthermore, before the stock market crash of 1929 and the ensuing Great Depression, the Schiller PE Ratio reached a high of 32.4 in September 1929….. only a few points higher than it is today.

So, what does that mean? It means that the Dow Jones and S&P 500 Indexes are now in record bubble territory and their future reward is LOW while their future risk is quite HIGH. However, if we look at gold and silver, we see quite the opposite.

Not only did the gold and silver prices experience a huge correction from 2011 to 2015, the current price of silver is very close to the cost of production. Here is a chart of one of the largest primary silver mining companies in the world…. Pan American Silver: 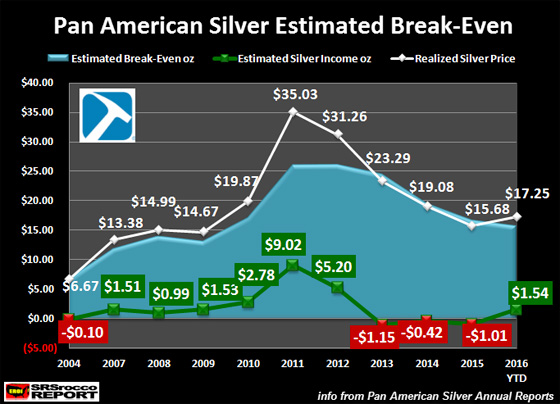 Moreover, my estimation for the average break-even for the primary silver mining industry is between $15-$17 an ounce. I have not done any recent calculations for the estimated breakeven for gold, but it looks to be between $1,100-$1,500. While the gold price has a bit more cushion than silver, we can plainly see that both gold and silver are much closer to a bottom than the Dow Jones Index.

According to this analysis, the HIGH RISK, LOW REWARD easily goes to the Dow Jones and S&P 500 Index, while the LOW RISK and HIGH REWARD belong to gold and silver.

We must remember, when the Dow Jones Index suffered a mere 2,000 point correction at the beginning of 2016, the gold and silver price surged:

If the gold and silver price jumped 15% when the Dow Jones only fell 2,000 points in 2016… how high will their prices move when the Dow Index falls 5,000-10,000 points and suffers a 25-50% correction? Because the entire market is held up by so much leverage and debt, I do believe the precious metals will enter into a new market of much higher prices.

Even though the Cryptocurrencies are getting hammered today, this is just an overdue correction. Bitcoin and the other cryptocurrencies probably have a great deal more to fall before bottoming. However, I do see some of the top cryptocurrencies to hit new highs in the future. I mentioned this market because the same thing will happen to gold and silver.

All of a sudden one day and out of the blue, the price of gold and silver are going to surge higher. Then the next day… they will have jumped even higher still. Before investors or the public realizes it, the gold and silver prices will seem like they are too expensive to buy at this point….the same way when the cryptocurrencies shut up 200-1,500% in just brief period of time.

This is why an investor CANNOT TRY TO TIME WHEN TO GET INTO THE PRECIOUS METALS. If one does not have a decent amount of physical gold and silver, it will be extremely difficult or likely impossible to acquire the metals when the prices have skyrocketed. Sure, you might be able to get some metal, but the prices or premiums could be very high indeed.

So… as the folks who purchased Bitcoin and sat on them for several years before the huge move higher, the same thing will happen to gold and silver. While retail gold and silver sales have fallen significantly, as well as precious metals sentiment, the fundamentals point to a LOW RISK and HIGH REWARD… if we are patient.