The bullion banks periodically fleece the long-side speculators in the futures market. The pattern has become almost as familiar as day following night.

It plays like this; a constant stream of individuals, institutions, and hedge funds discover (or rediscover) the fundamental reasons to own precious metals. Instead of buying physical metal, they get lured into the futures markets by the ability to make leveraged bets and the promise of riches. 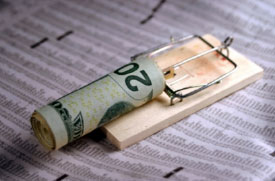 The bullion bankers build massive short positions by selling paper contracts to all comers and wait for a chance to push prices lower.

Recent revelations over price rigging have shown these banks have both the power and the will to move the markets in their favor.

Once the move down begins, leverage does its work. Falling prices trigger additional selling as speculators get either stopped out or forced out by margin requirements. The bullion banks cover their short positions at a tidy profit, and start preparing for the next wave of speculators.

Speculators are Referred to As “Dumb Money”

They always seem to lose. The implication is that they aren’t as knowledgeable as the bankers or “smart money.” A more accurate classification would be “pawns” versus “chess masters.”

The good news for bullion investors is that the blatant cheating is getting some long overdue attention – both in the news and in civil courts. It should get harder for bullion banks to run their scheme if they get held to account for the years of cheating and must pay massive fines.

Another bit of good news is that it looks like the fleecing of the most recent batch of speculators is done. The COMEX publishes a report weekly called the Commitment of Traders. The report shows speculative long positions in gold and silver contracts reaching a very low ebb, and the same is true for the banks’ short positions.

If the pattern holds, we will see spot prices recovering – at least for a while.