The more things change in Washington... the more they stay the same.

Despite an unconventional outsider in the White House, it’s business as usual for entrenched incumbents of both parties. The next major order of business for the bipartisan establishment is to raise the debt ceiling above $20 trillion.

Since March, the Treasury Department has been relying on “extraordinary measures” to pay the government’s bills without breaching the statutory debt limit.

By October, according to Treasury officials, the government could begin defaulting on debt if Congress doesn’t approve additional borrowing authority.

Treasury Secretary Steven Mnuchin wants Congress to pass a “clean” debt limit increase. That would entail just signing off on more debt without putting any restraints whatsoever on government spending.

Fiscal conservatives hope to tie the debt ceiling hike to at least some budgetary reforms. But even relatively minor spending concessions will be difficult to obtain from the bipartisan establishment. 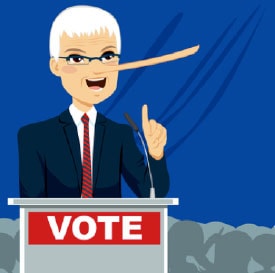 Democrats and a few left-leaning Republicans together have an effective majority in the U.S. Senate. They wielded their legislative might by defeating the GOP’s watered down Obamacare repeal bill, with the decisive “no” vote cast by ailing Republican John McCain.

It was exactly the sort of media spotlight moment Senator McCain has craved throughout his long political career.

The narcissistic Senator’s shtick is to posture as a selfless crusader for noble causes that his fellow Republicans just aren’t high-minded enough to get behind.

Yet for all his sanctimony, McCain is just as politically opportunistic and just as hypocritical as many of his Senate colleagues. The Senator from Arizona ran for re-election last time around on repealing Obamacare. Yet when given the opportunity, he voted to keep it in place.

He campaigns as a conservative when it suits his political needs and portrays himself as a maverick when he wants media accolades. He legislates as neither a conservative nor a maverick but as an entrenched establishment incumbent. That can also be said of other big-name Republicans.

When President Trump’s Budget Director Mick Mulvaney unveiled a proposed budget that, for the first time in decades, asked Congress to make tough cuts to an array of spending programs, establishment Republicans joined Democrats in branding it “dead on arrival.”

Congress didn’t even consider the idea of spending cuts to be on the table for negotiation. That’s how entrenched deep state loyalties are in Congress.

Instead of working with Trump’s budget, the Republican-controlled Congress promptly began hammering out a spending bill that added billions to what the administration requested – $4.6 billion more for agriculture, $4.3 billion more for interior and environmental programs, $8.6 billion more for the departments of Transportation and Housing and Urban Development.

No cuts to refugee and foreign aid programs. Even the much-maligned National Endowment for the Arts made it through the House Appropriations Committee unscathed.

The bottom line is that there will be no spending restraint in Washington, and therefore no way out of the coming debt crisis. The Congressional Budget Office projects that publicly held federal debt as a percentage of the economy will soon surge past all previous wartime spikes.

National Debt (Publicly Held) as a Percentage of GDP 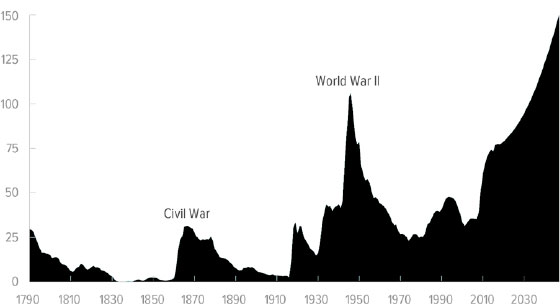 The official national debt of nearly $20 trillion is just the tip of the iceberg. It represents a small proportion of the total unfunded liabilities the political class has racked up over the past few decades (pointedly, after President Richard Nixon repealed the last remnants of gold redeemability for the U.S. dollar and replaced it with pure fiat).

Taxpayers are on the hook for perhaps $100 trillion more in unfunded entitlement and pension IOUs.

Plus, state and local government pensions are underfunded by several trillion dollars. They haven’t blown up yet because the rising stock market and steady bond market seen over the past several years has enabled pension fund administrators to kick the can further down the road. They are projecting unrealistically high market returns into the future – and still coming up short.

Federal Reserve Makes It All Possible

Trillions upon trillions of dollars have been promised that simply won’t exist... unless the Federal Reserve creates them out of nothing. The Fed’s unlimited power to expand the currency supply enables politicians to commit acts of fiscal malfeasance with political impunity.

A legislator might get voted out of office for raising taxes, but probably not for adding to the budget deficit. Most voters don’t perceive any immediate consequences to a rising national debt or the expansion of the currency supply. That’s why “borrow and print” is a politically convenient way for lawmakers to stealthily raise taxes.

Government spending extracts resources from the economy regardless of whether that spending is paid for through taxes or through the deceit of borrow and print.

What excessive borrowing today does is set up political demand for massive inflation of the currency supply down the road. The inflation tax can be just as devastating to a person’s wealth as any tax collected by the IRS.