Precious metals investors may not be aware, but silver investment has seriously outperformed gold in this major market sector. Even though precious metals sentiment and sales are currently lower than they were over the past several years, this is only temporary pause before the market surges as the highly inflated stock market finally cracks and plunges lower.

When we start to witness a huge correction or crash in the broader stock markets, there only be a few physical assets worth owning to protect wealth. Investors moving into the precious metals at this time, will see their asset values increase significantly. However, silver will likely out perform gold as investors and speculators move into the more undervalued precious metal.

Actually, we have already witnessed this as physical silver investment versus jewelry demand has outperformed gold in the same market. Let me explain. While industrial demand is the largest consumer of silver in the market, silver jewelry demand has ranked second for quite some time. But, this all changed after the 2008 U.S. Banking Industry and Housing Market collapse. 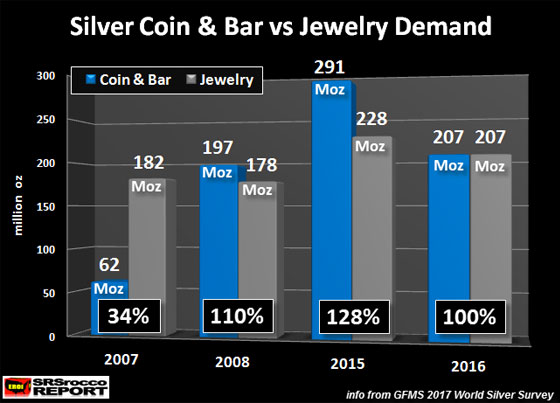 While silver investment demand fluctuated over the next seven years, it hit a record high of 291 Moz in 2015 as investors took advantage of low prices not seen since 2009. As physical silver bar and coin demand reached a new record in 2015, accounting for 128% of global jewelry demand that year.

Before the 2008 market meltdown, global gold physical investment of 14.4 Moz accounted for 18% of world gold jewelry demand of 79.5 Moz: 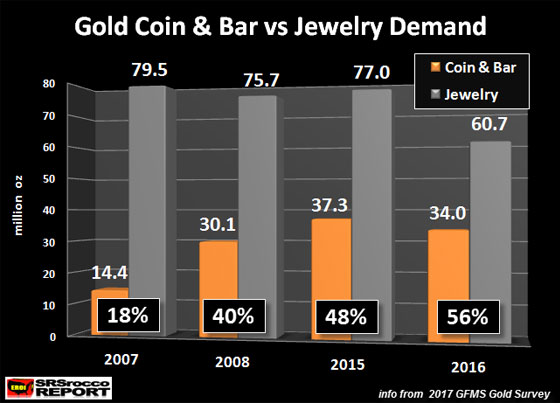 Even though physical gold bar and coin demand more than doubled in 2008 to 30.1 Moz, it still only represented 40% of global gold jewelry demand of 75.7 Moz. If we go back to the silver chart above, physical silver demand increased more than three times in 2008 (versus 2007) and accounted for 110% of global silver jewelry demand.

Yes, it’s true that in “Dollar terms”, investors bought more physical gold than silver, but as I have stated before…. it’s a matter of focusing on “how many ounces” you own, not “how much in Dollars.”

What does this mean? It shows us that investors are buying a larger percentage of the silver supply than gold in relation to jewelry demand. Furthermore, pure silver bars and coins demand (291 Moz) in 2015 increased nearly five times the amount (62 Moz) in 2007, versus physical gold investment that only increased 2 1/2 times, from 14.4 Moz to 37.3 Moz during the same time period.

While many precious metals investors have become disillusioned by market fundamentals because they don’t believe they matter in a manipulated market, patience will reward those who remain committed. The reason I believe this has to do with my understanding of the Energy Market. Without my in-depth knowledge of the disintegrating global oil industry, I would also believe that the Fed and Central Banks can continue manipulating the markets for decades. However, time is not on their side.

This is why I try to educate precious metals investors about energy. If you understand the dire energy predicament we are facing, you would realize there are few assets to own in the future to protect wealth. I will be publishing an article shortly on the BIG 3 U.S. OIL COMPANIES latest financial results... which continue to disappoint.