Republican leaders in Congress, with the urging of Treasury Secretary Steve Mnuchin, are anxious to raise the federal borrowing limit from $19.8 trillion – no strings attached.

The only hitch is those pesky conservative voters who were promised restraint by party leaders. GOP establishment hopes to quietly pass a “clean” bill to raise the debt ceiling – a direct betrayal of that voter base – don't currently enjoy enough support from other Republican members who still consider themselves accountable. So a deal with the Democrats beckons.

Republicans technically have the power to finally honor the limit on borrowing by reducing spending. After all, Republicans control both Congress and the White House. 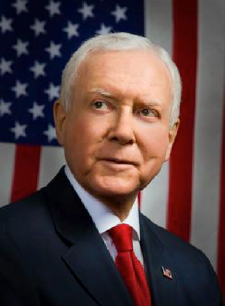 The last thing most Republican voters want is for McConnell and Ryan to start cutting deals with Nancy Pelosi and Chuck Schumer for a debt ceiling hike and MORE spending. But that may be exactly how this batch of sausage gets made. Watch for a coalition of big government Republicans and Democrats to leave future generations holding the bag – yet again.

GOP Senator Orrin Hatch is scornful of anyone in his party trying to impose spending restraint. He had this to say: “Some conservatives think they can get some programs cut. Well, that’s not gonna happen… We have to pay our bills and anybody who doesn’t want to do that doesn’t deserve to be here.”

Hatch and his friends in leadership – on both sides of the aisle – share a bizarre philosophy when it comes fiscal responsibility. They insist that the best way to meet obligations is to embrace perpetual deficit spending and simply borrow without limit to cover it.

As far as they’re concerned, any elected officials with an opposing view don’t even belong in Washington DC.

Given that Congress has raised the borrowing cap 72 times since 1962, and that neither party has ever held the line, we can certainly agree that believers in fiscal restraint are marginalized on Capitol Hill. Representatives who bluff about fiscal responsibility, but eagerly fold at the first opportunity, fit right in, of course.

There are some hoping to see a real fight, and perhaps even a victory in the coming months.

It can’t be ruled out, but leadership is anxious to avoid any fuss and will reach across the aisle rather than consider the fiscally responsible course.

Nevertheless, conflict over raising the debt ceiling could add to the headwinds for the Federal Reserve Note. And, in the long run, borrowing without restraint will further devalue the greenback. Perhaps more investors will be reminded of that fact in the coming weeks and buy some gold.