In an interesting change of events, production at four of the top primary silver miners plummeted during the second quarter of 2017. This goes well beyond normal fluctuations in mining companies production figures during different quarterly reporting periods. The company with the least percentage decline in silver production still suffered a 20% reduction of mine supply in the second quarter.

According to recently released company data, silver production declined between 20-34% from these four primary silver miners during the second quarter. The company that suffered the biggest decline in silver production was Hecla at -34%, followed by Endeavour Silver at -26%, Silver Standard at -24% and First Majestic with a decrease of 20%: 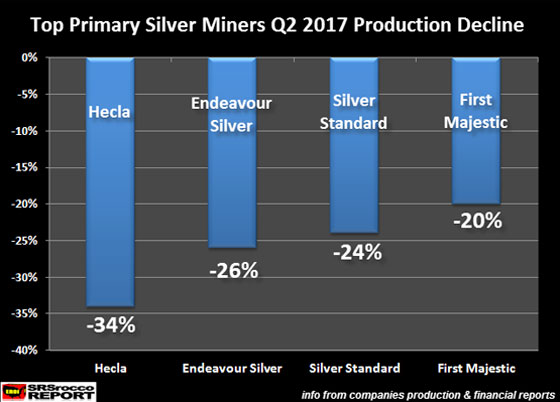 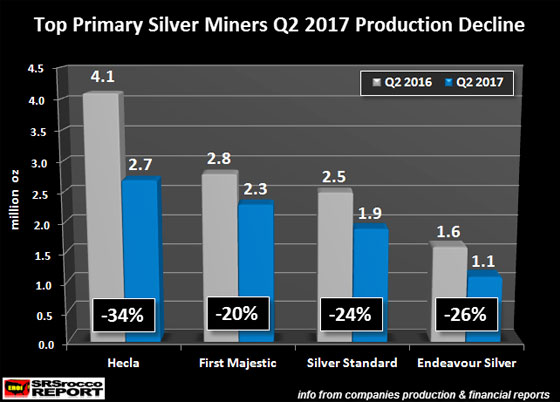 Hecla suffered the largest decline in silver production by falling 34% due to a mining strike at its Lucky Friday Mine in Idaho. Production at the Lucky Friday Mine has been suspended since a workers strike began at the mine on March 13th. Furthermore, Hecla’s Green Creek Mine in Alaska saw its silver production decline from 2.1 Moz Q2 2016 to 1.9 Moz Q2 2017 due to falling ore grades.

This huge decline in silver production at Endeavour Silver, plus falling earnings, impacted its stock price which fell 16% in one day after the news.

Silver Standard (renamed SSR Mining) which suffered a 24% decrease in silver production saw its mine supply fall to 1.9 Moz in Q2 2017 versus 2.5 Moz during the same period last year. This steep reduction in the company’s silver mine supply was due to the closure of their Pirquitas open-pit mine. SSR Mining’s mine plan for Pirquitas was to move from open-pit operations to underground mining. Silver production at Pirquitas for the remainder of 2017 will be from processing of open-pit stockpiled ore.

For example, Couer Mining reported the same silver production of 4.0 Moz in Q2 2017 as well as in the same period last year. Fortuna actually saw its production increase 36% from 1.6 Moz Q2 2016 to 2.1 Moz Q2 2017. We are still awaiting release of Pan American Silver and Tahoe Resources results next week. However, Tahoe’s Flagship Escobal Silver Mine was shut down by the Guatemalan Supreme Court on July 6th due to suspension of its license based on allegations of human rights violations and the failure of local support for the mine.

Now, this didn’t impact Tahoe’s silver production at its Escobal Mine during the second quarter of 2017, but it will for the second half, if the Guatemalan Supreme Court does not allow operations to return for the remainder of the year. I wrote about this in my recent article, WORLD’S SECOND LARGEST SILVER MINE SHUT DOWN: Implications For Company & Market.

Investors in silver mining companies are dealing with issues that are out of their hands. While I believe that some of these mining share prices will explode higher when the silver price finally takes off, it takes a great deal of patience and fortitude to continue investing as mining companies deal with all these issues that impact not only production, but their profitability as well.

Here is a breakdown of either Adjusted or Net Incomes of these Top Primary Silver Companies:

Out of the four primary silver mines that suffered big declines in production, all experienced adjusted or net income losses except Silver Standard. The only reason Silver Standard reported a profit was due to its two gold mines. Furthermore, even though Couer Mining did not suffer a reduction in silver production, it reported a $2.5 million adjusted income loss for Q2 2017.

I like to use Adjusted Incomes because it factors out financial inputs that are not directly associated with producing silver from the mine during that quarter. Adjusted Income gives us a more realistic figure for the profitability of producing silver from the mine, rather than Net Income that includes derivatives exposure, impairments and gain-loss on sales of properties… to name a few.

Lastly, it takes a lot of effort, expertise and management skill to produce silver. Unfortunately, just when a silver mining company believes it has a good grasp of its operations and future forecasts, a wrench or series of wrenches can be thrown into the engine to mess things up. We are seeing that now as four of the top primary silver mining companies deal with negative issues impacting production and profitability. Actually, five when we include Tahoe Resources and their ongoing problems and conflicts with local Guatemalan peoples on human rights abuse.

That being said, huge production declines at these primary silver miners haven’t impacting the market price because fundamentals aren’t playing their roll any longer as the Fed and Central Banks continue to print trillions of Dollars to support the STOCK, BOND and REAL ESTATE markets.

However, at some point, the Fed and Central Banks will lose control… and lose control BADLY. When they do, patience and fortitude by investors in precious metals and their mining companies will be generously rewarded. Unfortunately, most investors following the fickle nature of the public, only stay in an investment that is a WINNER.

So, I will continue to read comments by disillusioned precious metals investors who don’t have either the patience of fortitude to remain committed in the precious metals space until the point when FUNDAMENTALS matter once again.