BREAKING AWAY FROM THE WEST: Gold Investment In Germany & The U.K. Surged

While gold demand in the West continues to languish, something has recently motivated renewed interest in the yellow precious metal in Germany and the United Kingdom. Now, when I say “renewed interest”, I am referring to a surge in gold investment by Germans and British that we haven’t seen for quite some time.

This big increase in gold investment in Germany and the U.K. over the past year and a half is not from the diehard physical bar and coin investors, rather it is from a source that is even more interesting… it’s coming from investors in the retail Gold ETF Market. You see, this is a much different segment of the population who move into the Gold ETF Market versus the 1% that buy physical bar and coins. When there is a surge of Gold ETF buying, it means the institutional or regular mainstream investor is worried about the overall market.

And why shouldn’t Europeans be worried as the ECB – European Central Bank’s President, Mario Draghi, stated in June that they would continue its bond buying program (QE – Quantitative Easing) until 2019, even though they believe that the “regions growth” looks broadly balanced. This is like a doctor telling his patient, “we are going to continue with broad-based Chemo-Therapy”, even though your cancer has gone into remission.

Unfortunately, most of the public in the European Union doesn’t realize something is seriously wrong if the ECB believes it has to continue printing money to buy bonds… even though the economy seems to be okay. Come one… the economy isn’t okay, it’s a HUGE BALLOON looking for a PIN.

Regardless, something has spooked both the Germans and the British as flows into their Gold ETF’s have surged since the beginning of 2016. In just the past five quarters, European Gold ETF flows have surged by 42% from 690 metric tons (mt) in Q1 2016 to 978 mt in Q2 2017 (World Gold Council Demand Trends): 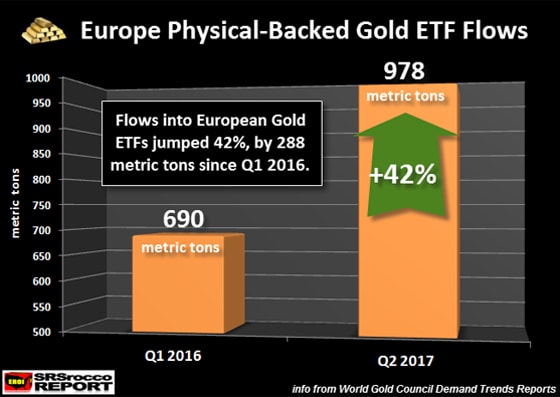 This next chart shows the increase in European Gold ETF inventories since the first quarter of 2016: 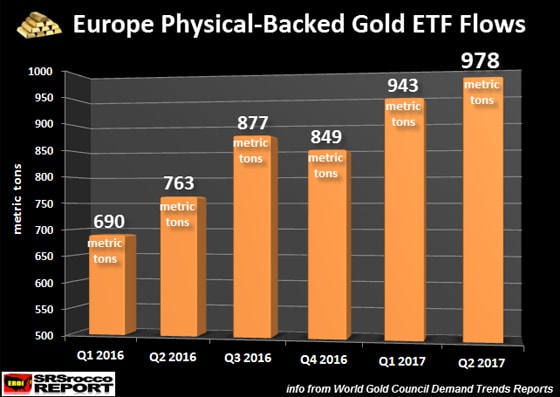 While inventories in European Gold ETF’s declined a bit during Q4 2016, the overall trend continues higher. I believe the decline of gold ETF inventories during the fourth quarter of 2016 may have been due to a decrease in the price of gold in both the Euro and British Pound… but I will get into more details about that in a minute.

According to World Gold Council Demand Trends, the majority of flows into European Gold ETF’s were in German and U.K Gold ETFs: 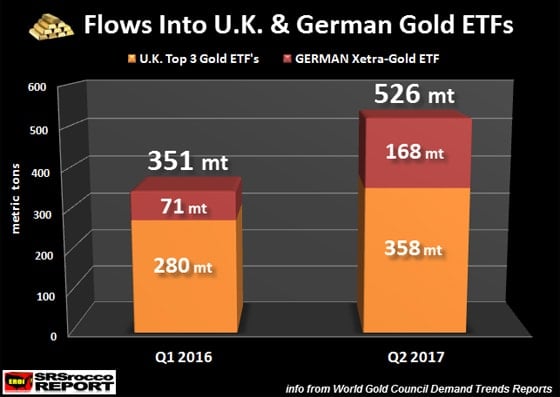 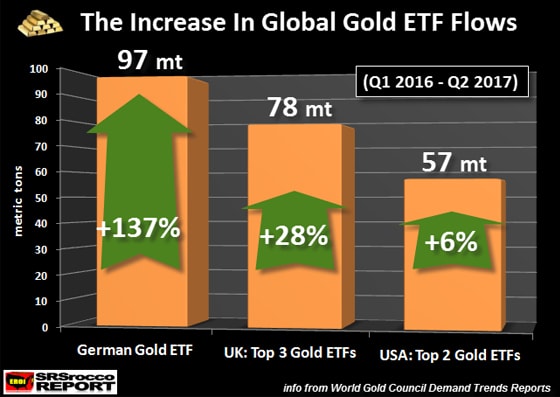 That being said, we are also seeing a substantial increase of inventories in the U.K. Gold ETFs. Here is breakdown of Gold ETF inventory changes in these three countries Gold ETFs:

Clearly, we can see that the biggest increase in a single Gold ETF was in the German Xetra-Gold ETF by increasing 97 mt in the past five quarters, nearly three times more than any of the other U.K. or U.S. Gold ETFs. This huge increase in German Gold ETF demand is a very interesting indicator. What is the motivation for Germans to move more into the protection of gold? Could price be a determining factor? Well, maybe for the British, but not really for the Germans because the gold price in Euro’s hasn’t really increased anymore than being price in Dollars since Q1 2016:

However, this doesn’t really explain why there is so much interesting in gold in Germany. Again, I am not talking about physical bar and coin demand, rather this is in the institutional and retail investor segment. Actually, I am more interested in the change in the Gold ETF market than I am in the physical gold bar and coin market because 98-99% of investors are in the institutional and retail market. So, when we see a big change in retail and institutional gold demand, then it provides us a real indicator that something is seriously wrong in the overall market.

Germany is the largest economic power in the European Union and I believe the citizens are not only worried about the disaster that the ECB is doing with all the massive money printing and bond purchases, but there are serious geopolitical concerns now with Russia, by the instigation of the U.S. Government.

With the new Russian Sanctions voted nearly unanimously by both the Senate and Congress, we may now begin to see a huge rift between the German and U.S. foreign policy. The new Russian sanctions will target any company that assists or contributes to the development or maintenance of Russian export pipelines. Currently, German interests are working with the Russians on a new natural gas pipeline project called Nord Stream 2.

Germany imports 40% of its natural gas (2016 figure) and 35% of its oil (2014 figure) from Russia. So, for the U.S. Senate and Congress to pass Russian sanctions that will impact Germany, who receive more than one-third of their energy from Russia, will likely cause increased political tensions between U.S. and Germany. Of course, the Germans need the energy for their economy, so I doubt they will abide by the new U.S. sanctions against Russia.

Unfortunately, the Senate and Congress controlled U.S. Government may have finally overstepped their bounds by meddling too much in the European Union economy as Germany will likely continue to increase business relations with Russia.

Furthermore, the German Government is probably taking note how Russia continues to add to its official gold reserves as they realize the U.S. Dollar global reserve status is coming to an end. With geopolitical tensions increasing in the European Union, along with the insane QE monetary policy by the ECB, Germans may finally be waking up to the fact that “GOLD is the king of currencies” as well as a high-quality store of value.

I believe we are going to see a great deal of volatility in the markets when the U.S. Government debt ceiling deadline causes a possible default in early October. This along with the CIRCUS now taking place in Washington DC, investors who haven’t purchased any physical gold and silver, need to seriously consider doing so before the FAN hits the COW EXCREMENT.