This will be a short post, but it is important as it will lay some ground work for articles to come out over the next several weeks in comparing the new Bitcoin-Crypto currency market to gold and silver.

While conspiracies do indeed take place, they are based upon sound reasoning and evidence that either proves a conspiracy has occurred, or proves the official story is bogus. On the other hand, lousy conspiracies are easy to dismiss when facts and sound evidence are brought forward. Unfortunately, even when the facts or the evidence is presented step by step, those who either promote or believe these lousy conspiracies… continue to do so.

This has to be one of the most frustrating areas of my research, writing and analysis. Why? Because, I receive emails at least once a week bringing up one of my favorite LOUSY CONSPIRACIES.

One of the more insane conspiracies in the precious metals community is the notion that the world has 1-2 million tons of gold hidden in secret vaults. Some of these vaults are the infamous Yamashita’s Gold Treasure, Nazi Gold Vault, Bank of Hawaii Massive Gold Holding and etc.

You see, conspiracies, especially LOUSY CONSPIRACIES, are a great way to make a buck selling a newsletter or book. Because people don’t take the time to do the research and fact check, it’s much easier and a great deal more fun to believe in the hype of a conspiracy. This is quite a shame because lousy conspiracies give the few sound conspiracies a bad reputation.

Even though I wrote about this back in April, CONSPIRACY vs FACT: How Much Gold Is In The World??, it seems necessary to discuss this once again as an introduction to why gold and silver will still be better quality stores of wealth versus crypto currencies over the medium to longer term. This goes against some of the recent analysis put out in the Alternative Community suggesting that gold will no longer have value in the future due to crypto currencies taking over the role as a new digital monetary system.

Anyhow… the production of silver and gold are extracted out of the ground at a certain ratio. Recently, it is approximately 9 to 1, silver to gold. Let’s take a look at the following two charts: 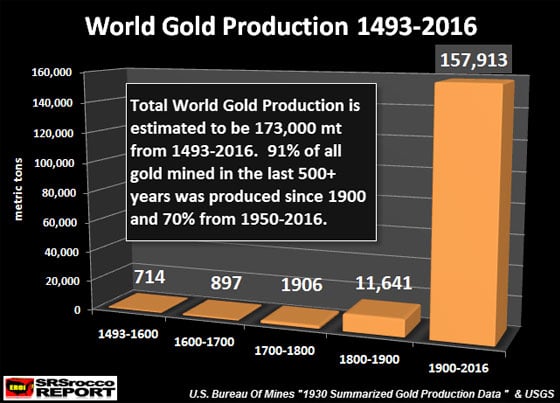 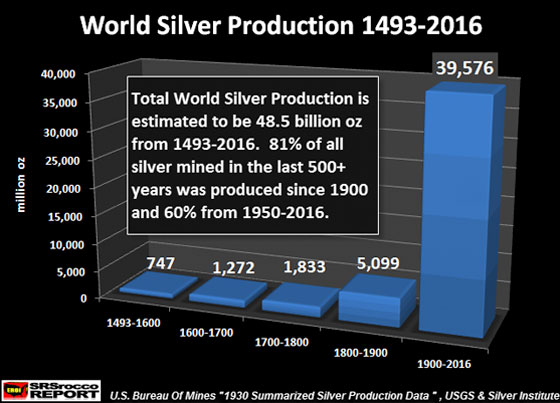 As we can see in these two charts, most of world gold and silver production has been extracted since 1900. For gold, the world produced 91% of all gold since 1900, and 81% of all global silver production. According to the best sources (shown on the bottom of the chart), there have been approximately 173,000 metric tons (5.5 billion oz) of gold produced since 1493 and 48.5 billion oz of silver. This turns out to be a 9 to 1 ratio, which is the same as the ratio of silver to gold in the ground.

NOTE: I did not convert the gold chart to million oz because world production figures are normally reported in metric tons. Furthermore, the accounting of total gold holdings are also published in metric tons. Also, this conversion should help: (1 metric ton = 32,150 oz).

Now that we know that, it is also true that the world produced a great deal more silver in relation to gold from 1493-1600. This was due to the huge new silver discoveries in South America by the Spanish during that time period. There was 747 million oz of silver produced from 1493-1600 versus 714 metric tons (23 million oz) of gold… 32 times more silver production than gold.

Okay…. some of you might think… well, what if some of the world gold production was missed during those earlier centuries because the silver-gold ratio was so high? Even if we apply a 9 to 1 silver to gold ratio for each century, this would be the result:

So, we can plainly see, it was physically impossible for the world to produce more than 200,000 metric ton (6.4 billion oz) of gold in the history of mankind. Thus, the notion that the world holds 1-2 million tons of gold in the world, is completely ludicrous.

For the life of me… I am completely puzzled as to why people can’t comprehend the obvious when it comes to the true amount of gold in the world.

I have received some emails and tweets suggesting that a lot of ancient gold production has not been accounted for. While this is true, it really doesn’t amount to much if we use logic and quantitative statistical modeling. We must remember, the ancient peoples were using simple mining techniques to produce gold. While Ancient Egyptians did produce a lot of gold, estimates show that it really didn’t amount to much compared to modern times.

Here is a excerpt from a study on Ancient Egyptian Gold Mining:

Archaeological and historical sources suggest that Egyptian metal-workers as early as 4,000 B.C. had developed remarkably sophisticated gold-smithing skills. In the millennia prior to the beginning of the Christian era, Egypt was in all likelihood both the largest consumer and producer of gold in the Eastern Hemisphere. During this period, estimates show that Egypt consumed four-fifths of the gold production of the ancient world. By 1,500 B.C. Egypt’s production of gold reached an estimated 1.4 million pounds.

Estimates of Ancient Egyptian gold production up until 1,500 B.C. were 1.4 million pounds, or 635 metric tons. This was 635 metric tons over a 2,500 year period. According to the 2017 GFMS Gold Survey, the world produced 3,222 metric tons of gold in 2016. Thus, the world produced five times more gold last year than the total the Ancient Egyptians mined for approximately 2,500 years. And as the excerpt above stated, Egypt was the largest producer and consumer of gold in the Ancient world.

If we consider gold production from other ancient time periods, such as the Roman Empire, Ancient Indian Empires and Asia, we still don’t come up with the sort of gold that was produced since 1900. Again, I doubt the world has produced more than 200,000 metric tons in the history of mankind. Hell, I would even go as far as say 225,000 metric tons. But, this is still a great deal less than the 1-2 million tons suggested by those who seem to be unable to do simple math.