While interest and sentiment in the precious metals have been depressed compared to the preceding month, this all changed during the past few days. This trend change is particularly the case for silver. Even though Silver Eagle sales have been much weaker this year, positive signs show that investors still believe in acquiring the shiny metal when fear and uncertainty enter into the markets.

Although, Silver Eagle sales for Jan-Aug 2017 are nearly 50% lower than they were during the same period last year. I believe the biggest factor that hurt Silver Eagle sales was the election of Donald Trump as U.S. President. Many individuals in the Alternative Media think that because Trump is in the Whitehouse versus Hillary Clinton, it translates to a lot less FEAR as it pertains to the control by the elite. Thus, the motivation to continue purchasing precious metals, bulk food, guns-ammo and survival goods has diminished considerably since the election in November.

However, when serious geopolitical events arise, investors still want to rush into owning more gold and silver. And they did so in a BIG WAY over the past few days. 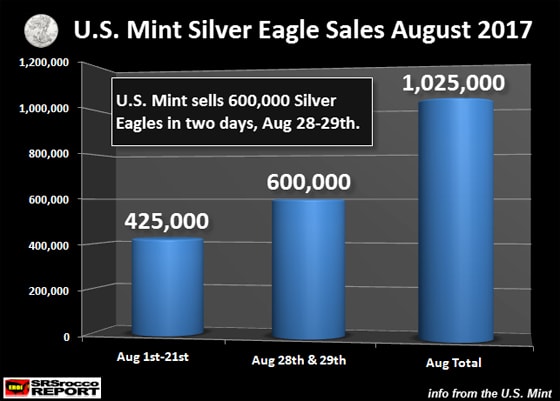 As we can see, Silver Eagle sales for the first three weeks of August were only 425,000, the slowest trend compared to all the previous months. But, after the N. Korean nuclear threat, the massive flooding in Houston Texas, and the U.S. debt ceiling issue over the past week, the U.S. Mint sold 600,000 Silver Eagle coins in two days, surpassing the 425,000 four-week total (Aug 1st-25th).

Again, the U.S. Mint sold 300,000 Silver Eagles on Monday, August 28th and another 300,000 on Tuesday, August 29th. They may have another update today for the past two days, but sometimes they wait until the next month to list those sales.

Regardless, that is a great deal of Silver Eagles sales over those two days. I would imagine the crazy events over the past week were instrumental in pushing up not only the silver price but also demand for Silver Eagles.

What is also extremely interesting about the recent US Mint Gold and Silver Eagle sale figures, is that the silver to gold buying ratio is now above the 100 to 1 ratio. The U.S. Mint sold 1,025,000 Silver Eagles vs. 9,500 oz of Gold Eagles in August (so far). Thus, the Silver to Gold Eagle sales ratio is now 108 to 1. Which means, investors are purchasing a great deal more Silver Eagles than Gold Eagles during these tumultuous geopolitical, natural disaster and upcoming financial events.

It will be interesting to see what happens with precious metals demand and prices when the U.S. debt ceiling debate becomes an issue next month. Also, there is speculation that there will be a significant correction in the broader stock markets this fall. If we do see a significant correction in the broader markets, I would imagine we will see a surge in the price and demand of gold and silver.

This is exactly what happened to the precious metals at the beginning of 2016 when the Dow Jones fell 2,000 points in a relatively short period. In just two months as the Dow Jones sold off just 2,000 points, the silver price increased 17%, and gold jumped 20%:

While the overly-inflated U.S. stock market could continue to rise even higher, at some point, it will suffer a substantial correction. Because the U.S. govt has been propping up the markets, when this correction finally arrives, it will likely be the BIG ONE.

Thus, it is important to own precious metals to protect against falling paper asset values. Furthermore, this will only be PHASE 1 of the upcoming U.S. economic and financial collapse. The market correction will be the WARNING LIGHT. However, most won’t pay attention to this warning, so business, as usual, will continue for a while longer

When the REAL CRASH comes… then if you don’t hold a good portion of your wealth in precious metals, you will wish you had.