The four-decade long monopoly of the U.S. Petro-Dollar as the world’s reserve currency is coming to an end. Unfortunately, most Americans have no clue that when the Dollar loses its reserve currency status, life will get a lot tougher living in the U.S. of A. Let’s say, Americans will finally receive “Precious metals religion.” 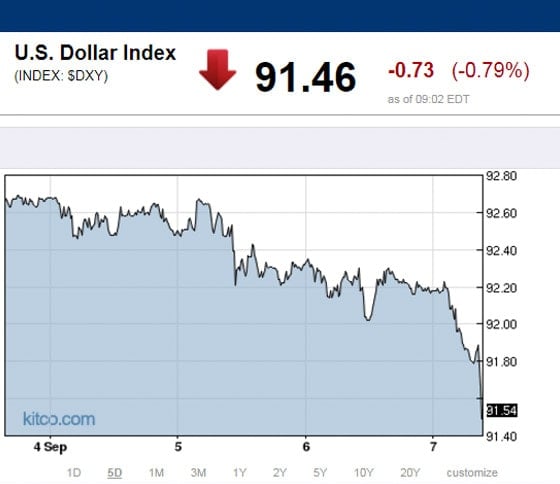 According to technical analyst, Clive Maund, in his recent article, DOLLAR update as LOSS OF RESERVE CURRENCY STATUS LOOMS..., he stated the following:

The dollar is on course to lose its reserve currency status. This is not something that will happen overnight, it will be a process, but at some point there is likely to be a “sea change” in perception, as the world grasps that this is what is happening, which will trigger a cascade of selling leading to its collapse, whereupon gold and silver will rocket higher.

In that article, Clive posted the following chart on the U.S. Dollar Index (USD index) and its key support level: 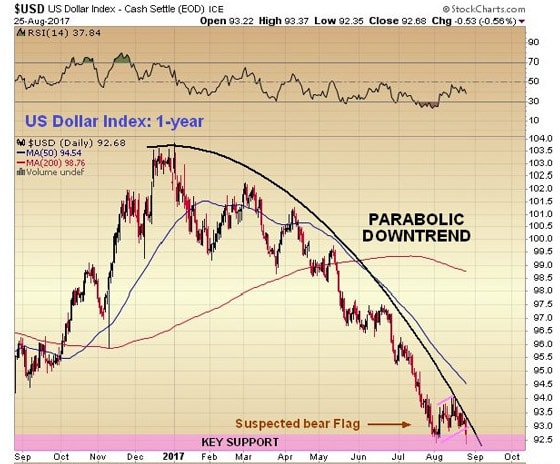 The Reason for the Selloff in the Dollar

May have been due to the disaster that took place in the 10-year U.S. Treasury Repo market today. According to Zerohedge’s article “We’ve Never Seen Anything Like This”: Repo Market Snaps As 10Y Suffers “Epic Fail”:

The dollar is on course to lose its reserve currency status. This is not something that will happen overnight, it will be a process, but at some point there is likely to be a “sea change” in perception, as the world grasps that this is what is happening, which will trigger a cascade of selling leading to its collapse, whereupon gold and silver will rocket higher.

The pressure on the U.S. Treasury 10-year repo market is likely a reaction to what came out of the annual BRICS summit in China yesterday, According to the article, Escobar Exposes Real BRICS Bombshell: Putin’s “Fair Multipolar World” Where Oil Trade Bypasses The Dollar:

“To overcome the excessive domination of the limited number of reserve currencies” is the politest way of stating what the BRICS have been discussing for years now; how to bypass the US dollar, as well as the petrodollar.

Beijing is ready to step up the game. Soon China will launch a crude oil futures contract priced in yuan and convertible into gold.

This means that Russia – as well as Iran, the other key node of Eurasia integration – may bypass US sanctions by trading energy in their own currencies, or in yuan.

This announcement by Putin that oil trade should by-pass the Dollar came a few days after China announced that they plan to start trading oil on their Shanghai Exchange in Yuan, which will be backed by gold. While we have heard for years that China was going to back their currency or trade with gold, we now see actual plans to start implementing it sometime this year.

By China backing its new oil trading benchmark in Yuan with gold, it provides countries with a great deal of confidence in trading oil in another fiat currency besides the U.S. Dollar. Thus, countries that acquire a lot of Chinese Yuan by trading oil don’t have to worry about devaluation as they can convert Yuan into gold.

This Is Bad News For the Saudi-Petro Dollar System

The Petro-Dollar system that has been the foundation of world oil trade for the past four decades is now about to become obsolete. Even though many countries will continue trading oil in Dollars in the future, a larger percentage will likely move into trading oil in Chinese Yuan as it provides a “gold-backed protection” against fiat currency devaluation.

Not only is the Petro-Dollar under severe pressure, so is Middle East’s largest oil exporter that was the foundation of this monetary system back in the early 1970’s. Ever since the price of oil peaked in 2014 and has fallen by more than half to $49 currently, this has put an enormous strain on Saudi Arabia’s financial bottom line. In the past three years, Saudi Arabia sold over $250 billion of its foreign exchange reserves, which are mostly in U.S. Treasuries, to fund its national government.

Saudi Arabia’s foreign exchange reserves are now below the critical $500 billion level at $494 billion. Again, the low oil price is causing a lot of havoc in the Kingdom’s financial bottom line. Furthermore, Saudi Arabia has cut spending in oil projects and other areas. This has severely impacted the number of workers that the Kindom imports to work on in its oil fields, etc.

According to data in the article, Fewer Pakistanis finding work in Saudi Arabia:

The export of manpower sharply dropped in the first half of the current calendar year, latest data from the Bureau of Emigration and Overseas Employment shows.

If we divide the total 452,598 workers in half that Pakistan exported to Saudi Arabia in 2016, it equals 226,300 workers. Thus, Saudi Arabia imported only 77,600 workers in Jan-Jun 2017, which is two-thirds less than the average for the same period last year. Which means, Saudi Arabia is cutting back considerably on national government and state oil projects in 2017.

So, both Saudi Arabia and the Petro-Dollar are under severe stress as the low oil price guts the highly leveraged debt-based global economy. The notion that the U.S. Shale Oil Industry will allow the United States to become energy independent from Saudi Arabia and other Middle East oil exporters is pure nonsense.

I can tell you that the U.S. Shale Oil Industry is in BIG TROUBLE as the super-high oil production decline rates are gutting the financial balance sheets of majority of the country’s domestic energy companies. I mentioned this in my article, TROUBLE FINANCING ITS DEBT: Massive Decline Rates Push U.S. Shale Oil Industry Closer Towards Bankruptcy.

In response to that article, several of my readers made comments suggesting that I was “cherry picking” data by only providing some of worst case examples, such as Continental Resources. In the article, I presented information showing how Continental Resources didn’t have enough funds to pay its interest payment.

While Continental Resources is in more trouble than other domestic energy companies, it’s becoming increasingly difficult for most the U.S. shale oil producers to pay their interest expense. To counter the claim that I am “cherry picking” data, I present the chart below from the EIA – U.S. Energy Information Agency: 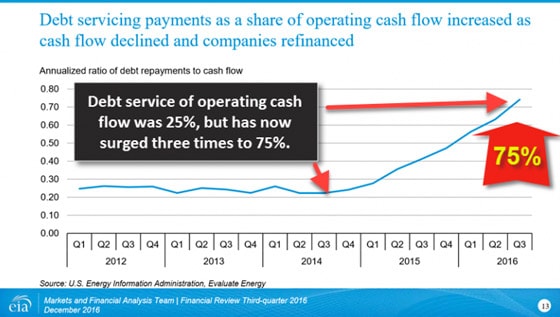 According to the EIA, 68 publicly traded U.S. energy companies are now spending 75% as a share of their operating cash flow just to pay the interest on their debt. The industry’s debt service share of cash flow is up three times, from 25% just three years ago. So, no… this is not just a Continental Resources problem, it’s industry wide.

Furthermore, additional evidence suggests that the U.S. Shale oil industry will NEVER be able to pay back its debt or let’s say, the overwhelming majority of its debt. Thus, the U.S. shale oil industry was never a commercially viable enterprise from day one. The insane business model of funding the drilling of shale oil wells by taking investor money that will never be paid back is another version of the famous PONZI SCHEME.

The announcement by China that it will start trading oil in Yuan backed by gold is the death-knell of the U.S. Petro-Dollar system. As Saudi Arabia and the U.S. shale oil industry continues to disintegrate under the strain of lower oil prices, this will be the icing on the cake that pushes the Petro-Dollar system over the cliff.

The death of the Petro-Dollar will cause the precious metals prices to soar. Investors who have not yet taken a position in physical gold and silver should seriously consider it as China’s announcement to trade oil in Yuan backed by gold was BIG WARNING that the days of the U.S. Dollar world’s reserve currency status are coming to an end.