Interestingly, the U.S. Securities & Exchange Commission (SEC) that investigated Madoff Securities in 1999, 2000, 2004, 2005, and 2006, found no evidence of fraud or the need for legal action by the commission. The failure of the SEC to find any wrong-doing by Bernie Madoff should provide Americans with plenty of reassurance and confidence that their 401k’s are the highest quality sound investments in the market.

Regardless, the concentration in equities by young Americans reached a record high since the 2008 financial crisis. According to the most recent data put out by the Investment Company Insititute (ICI), Americans in their twenties who participated in 401k plans, 75% of the group invested more than 80% of their funds into equities in 2015 versus 48% of the group in 2007: 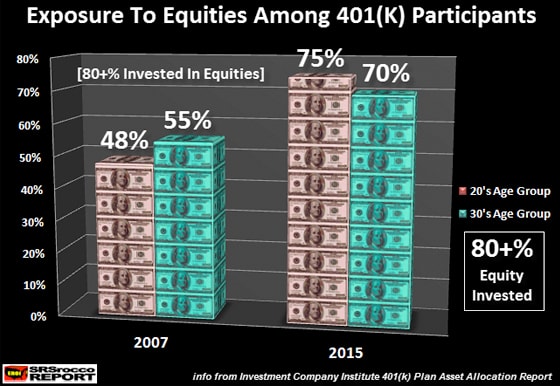 All this means is that younger Americans participating in the 401k Retirement Market have considerably increased their exposure to stocks while net benefits paid out have now gone into the red. I wrote about this in my article, Something Big, Bad and Ugly Is Taking Place In The U.S. Retirement Market: 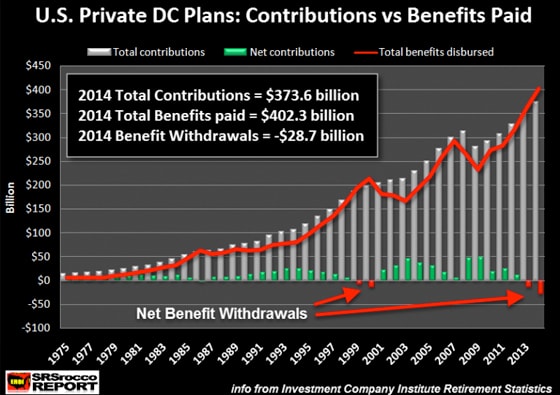 As we can see in the chart, the Private Defined Contribution (DC) Plans paid out $28.7 billion more than they took in in 2014…. the last year the Investment Company Institute provided data. Simply, Private DC Plans are mostly 401K’s.

Unfortunately, the ICI only has data on 401k net benefit withdrawals up until 2014. However, young Americans invested in the 401k Market have no idea that their funds are being used to pay off those who are retired. Moreover, the record concentration of 20-30’s age group into equities hasn’t been enough to support the 401k Retirement Market as more money is going out than is coming in. That is extremely bad news.

Regrettably, nowhere in the ICI’s new report on the U.S. 401k Market do they include the data showing the net benefit withdrawals in 2014 were more than benefits paid. Instead, they included the following information in the “Key Findings” area at the beginning of the report:

This is an alarming trend. More 4o1k plan participants held equities at the end of 2015 than they did before the financial crisis in 2007. What is even more troubling is the percentage of young Americans who have “ZERO” exposure to equities in the 401k Market. 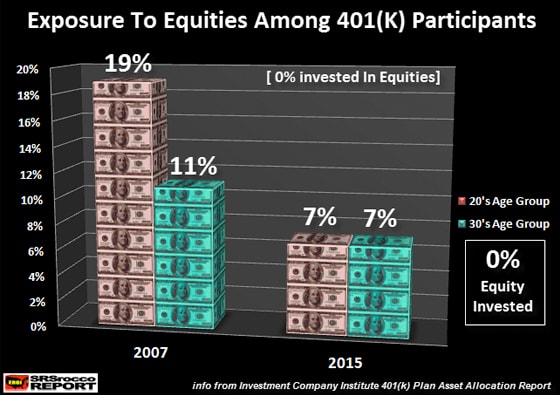 What this chart is telling us is that young American 401k plan participants with no exposure to equities (stocks) before the 2008 financial crisis were much higher than it was in 2015. While the 30’s age group change shown in the chart above change is much less, we can still see that younger Americans are putting more of their 401k funds into stocks than ever before.

This next chart from the ICI report shows the different age groups and their equity concentration in the 401k Market: 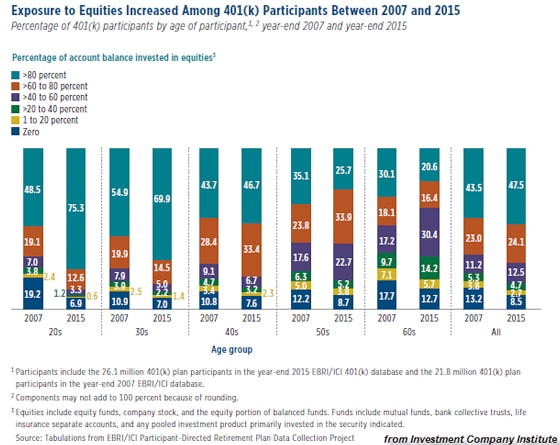 While Americans in their 50’s-60’s have decreased their (80+% in BLUE) exposure to equities since 2007, the overall trend, shown as “All” on the right-hand side of the chart, has increased from 43.5% to 47.5%. Furthermore, the 50’s-60’s age group with “zero percentage” exposure to equities (in DARK BLUE at the bottom) has decreased since 2007. Thus, older Americans participating in the 401k Market have increased their exposure to stocks when they should be more conservative.

I look at what is taking place in the U.S. Retirement Market as the final stage of the Greatest Ponzi Scheme in history. Unfortunately, Americans invested in the 401k Market have no idea they are apart of just another Bernie Madoff Ponzi Scheme, but 100 times larger. If the SEC couldn’t find any fraud in the Madoff Securities Investments via ongoing investigations between 1999-2007, what kind of reassurance does that say about protecting Americans in the U.S. Retirement Market?

The Federal Reserve and Wall Street have done an excellent job steering Americans away from sound physical investments like precious metals and into the largest Paper Retirement Market Ponzi Scheme in history. Even though Americans in the 401k Market have increased their exposure to equities, it hasn’t been enough to offset the net deficit as more money is now being paid out than is coming in.

What happens when the stock market finally cracks? Falling stock prices will motivate 401k plan participants to either cut back funds they invest or reduce their equity exposure. Thus, the collapse of the U.S. Retirement Market will be swift as Americans finally get Precious Metals Religion.