The Stock Market Is Seriously Overvalued Based On This Benchmark

If we compare the Dow Jones Index to the price of oil, we can see how much the market has to fall to get back to a more realistic valuation. For example, if the Dow Jones Index were to decline to the same ratio to oil back to its low in early 2009, it would need to lose 14,500 points or 65% of its value.

To get an idea just how overvalued the Dow Jones is compared to the price of oil, look at the chart below: 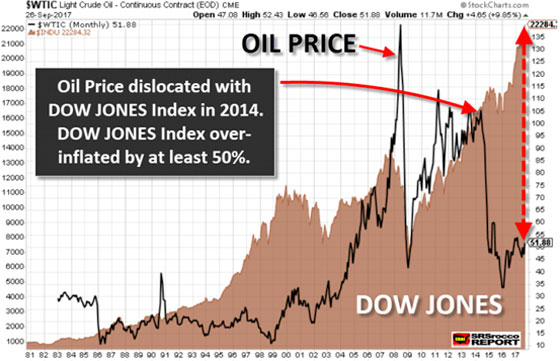 If you look at the movement in the oil price and Dow Jones Index from its low at the end of 2008 to 2013, you will see just how similar the two lines moved up and down together. While the oil price shot up higher than the Dow Jones during the peaks (2010-2013), they paralleled each other quite strongly. 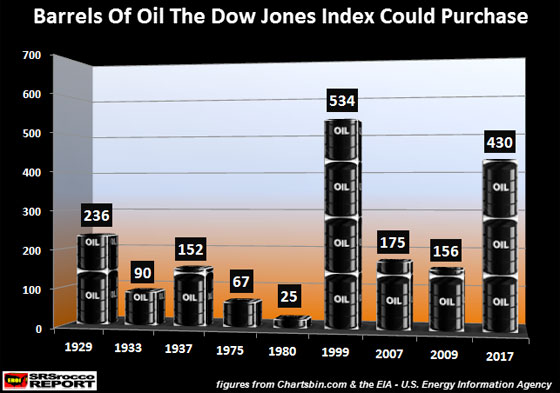 Interestingly, the lowest ratio was reached in 1980, when the Dow Jones Index could only buy a mere 25 barrels of oil. The ultra-low Dow Jones-Oil Ratio in 1980 took place during the huge inflationary period as a result of two Middle East oil price shocks. In 1980, the price of oil reached $36.83 a barrel versus the average 902 points for the Dow Jones Index.

However, after Fed Chairman Volcker raised interest rates to double-digits, the price of oil, gold, and silver plummeted over the next two decades. And by 1999, the Dow Jones-Oil Ratio surged to a high of 534. The high Dow Jones-Oil Rato came as a result of a low $19.34 oil price versus the Dow Jones Index average reaching a new high of 10,339 in 1999.

Regardless, the current Dow Jones Index can purchase 430 barrels of oil, which is in serious bubble territory. What is even more interesting is how the Dow Jones-Oil Ratio corresponds to the Shiller PE ratio. The Shiller PE Ratio is the price-earnings ratio of the average inflation-adjusted earnings from the previous ten years of the S&P 500 Index. As we can see in the chart below, the Shiller PE Ratio is currently at 30.68, higher than the peak in 1929 on Black Tuesday before the Great Stock Market Crash: 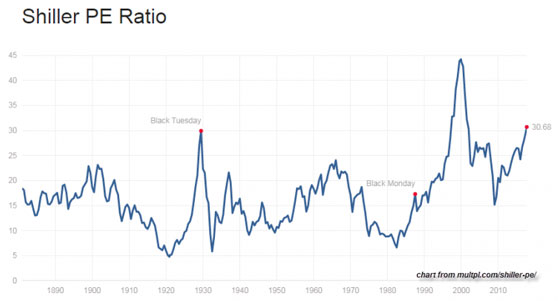 However, if we compare the Shiller PE Ratio chart to Dow Jones-Oil Ratio chart below, we can see some interesting similarities:

What does this mean? It means that the earnings of the S&P 500 and the Dow Jones Industrials are based upon the price of oil. That being said, the situation today in the oil industry is much different than it was in 1999. Again, the reason for the very high 534 Dow Jones-Oil Ratio in 1999 was due to a very high Dow Jones Index and low oil price. However, the oil industry in 1999 could make money on a weak oil price of $19, whereas today, they are losing money at a price that is more than double.

I decided to look at the U.S. largest and most profitable oil company, ExxonMobil, to see how the company’s financials in 1999 compared to 2016. The table below provides evidence that the current oil price is causing financial distress on ExxonMobil’s balance sheet:

With the price of oil at $19.34 in 1999, ExxonMobil was still able to enjoy positive $1.84 billion in U.S. upstream earnings versus a loss of $4.15 billion in 2016, based on a $43.29 oil price. Upstream earnings represent the profits ExxonMobil made from its U.S. oil and gas fields. So, even with an oil price of $19, less than half of what it was last year, ExxonMobil still made profitable earnings in 1999 on its U.S. oil and gas fields. 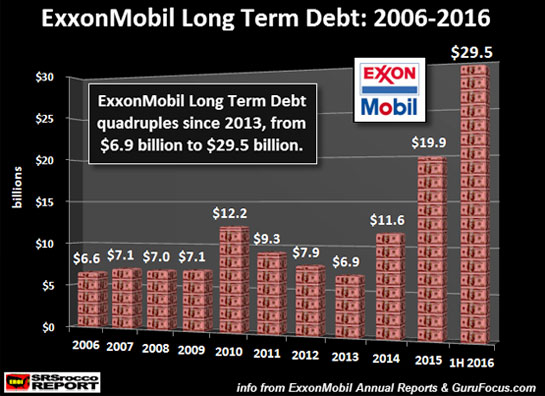 Moreover, if we consider the staggering amount of capital expenditures ExxonMobil has invested since 1999, overall liquid oil production is actually lower: 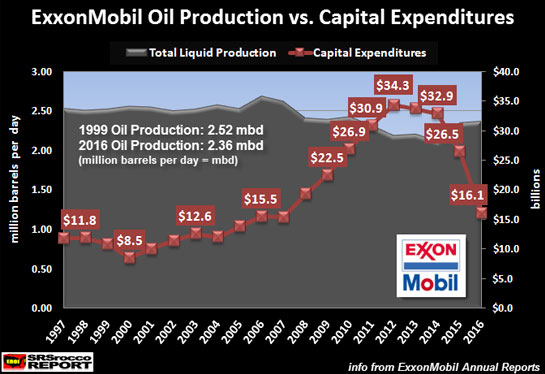 Now, what I have shown here is a deteriorating financial situation at the largest and most profitable oil company in the United States. ExxonMobil is the biggest and is supposed, the best of the best. So, can you imagine what is taking place in the marginal U.S. shale oil companies? Yes, it’s a fricken disaster.

Of course, I continue to receive correspondence from individuals who tell me otherwise. For some strange reason, brilliant people are unable to CONNECT THE DOTS. The world is full of very bright, but exceedingly stupid people. I hate to be so harsh… but there you have it.

In conclusion, the Dow Jones Index is currently overvalued by orders of magnitude we have never seen before. The only thing propping up the stock market and the economy is the Fed and Central Bank money printing and asset purchases. Moreover, there are Trillions of Dollars in currency swaps that aren’t even included that make a bad situation even worse.

For the precious metals investors who are disillusioned by a stock market that continues to rise towards the heavens while the gold and silver prices remain in the doldrums, you have my sympathies. However, fundamentals and the truth always win out in the end. Although, it has been quite difficult to follow an investment strategy based on ethics and integrity… it seems that many people today believe it is okay to sell one’s soul or integrity to make a buck.