Gold/Silver vs. Bitcoin Comparisons: A No-Brainer... or Brainless?

For most of the year, as Bitcoin soared, crashed, and soared again, cryptocurrency vs. physical gold-silver talking heads engaged each other in heated rhetoric about which of these venues is here to stay.

Some of the biggest names in finance, government, and the newsletter analyst space have made comments that – to be charitable – appear less-than-fully informed. Comments like "Even though bitcoin could rise to $100,000, it's still going to zero!" don't offer much insight. Some other questionable assumptions:

2017 percent price change comparisons: Relating this year's gold and silver's price range to that of bitcoin misses an important point. Yes, bitcoin (BTC) has risen by a much greater percent, but it's also fallen more. I don't recall gold dropping 40% this year, which bitcoin has... on a couple of occasions. 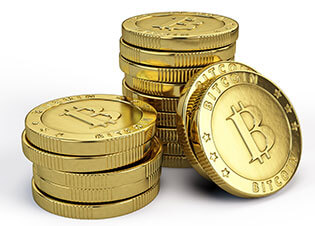 Trash-talking gold and silver as "antiquated": Bitcoin is now considered legal tender in Japan, but at this time, its primary function is for use in the purchase and sale of the 900+ "alt coins" currently available.

Most of these exchange entries in the crypto-space are not really "currencies" at all and will never trade as such.

Rather they are "coins" or "tokens" digitally created and circulated to raise seed money, via initial coin offerings (ICOs) in order to solve some business application in a blockchain-connected manner. Many have no trading volume – possibly because the market is skeptical of their business plan – and have become more or less "dead" coins.

At present, a relative few have an actively trading market. Investors have dropped literally millions of dollars into scores, if not hundreds of entrants which have appeared on the scene like dragon's teeth, in many cases only to see volume dry up soon thereafter.

At present, digital apparitions can be created and marketed by just about anyone. The following example demonstrates how easy it is (for now), and how gullible some people really are.

Can I interest you in a “Useless Ethereum Token”?

You are literally giving your money to someone on the Internet and getting completely useless tokens in return. There are no 'whitepapers,' no 'products', and no 'experts'. It's just you, me, your hard-earned Ether, and my shopping list.

You would think this blatantly-stated scam would elicit exactly zero response, yet reportedly, the UET 'Project" was able to raise more than $60,000!

By the same token, it's a safe bet that many Venezuelans wish they had traded some of their bolivares fuertes ("strong Bolivar") notes, rendered worthless over the last few years, for a few ounces of silver – or a single ounce of gold (gold coin prices) – which could now purchase respectively, six months of food, or a house.

Becoming a victim of "default bias": We all have a tendency to operate through a lens which uses the past as a default setting.

We keep doing what we know, avoid taking new risks, and resist changing the way we think.

Default bias can cause lost opportunities – whether it involves learning about the blockchain or being hesitant to buy precious metals when they're in boring "wear you out or scare you out" sideways action (another David Morgan homily)... as they've been lately.

Dismissing Bitcoin as "just digital": Kim Iskyan (Stansberry Churchouse Research) addresses the criticisms leveled at bitcoin and the blockchain. Responding to the charge that it's “purely digital,” he notes that fully 90% of all the money – or as David Morgan refers to it, "paper promises" – that exist around the world today are not physical either!

Doug Casey is always one to see beyond the next investment valley (or country), and he pegs what most people miss when they argue that bitcoin is "bad" for the future of precious metals. As he said,

When people buy these cryptocurrencies, even if they know nothing about hard money, economics, or monetary theory, they inevitably ask themselves, “Hmm, Bitcoin or the dollar?” They’re both currencies. Then they start asking questions about the nature of the dollar…the nature of inflation… and whether the dollar has any real value, what’s going to happen to it, and why.

People start asking themselves these questions – which wouldn’t have occurred to them otherwise... and it's going to make them very suspicious of the dollar. It’s going to get a lot of people thinking about money and economics in a way they never thought about it before. And this will inevitably lead them to gold...

What I am doing: In addition to staying very active in metals and miners, I have placed "small money" into several coins and tokens having viable business models in hopes of making an asymmetric profit. 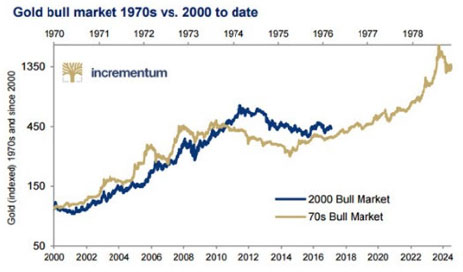 In spite of the current turmoil, I remain steadfast in the belief that the next few years will see gold and silver trading several times higher than their nominal 2011 prices of $1,900 and near $50 respectively. The blockchain is here to stay. As for bitcoin, only time will tell.

We may even see digital coins and tokens backed by precious metal. But these changes in the crypto space will not replace them. Indeed, gold and silver will almost certainly – to the surprise of many bitcoin bulls – markedly increase demand.

I plan to continue holding the majority of my investible funds in gold and silver. How about you?

Disover why buying American Eagle gold coins or American Silver Eagles coins, could be your best investment yet.