It has been a rough year for many primary silver miners as two-thirds have suffered declines in production. Also, many high ranking silver producing countries are also experiencing a pronounced reduction in their domestic silver mine supply. According to the data put out by World Metal Statistics, Chile’s silver production is down 20% in the first eight months of the year, while Australia is down 19%, Mexico declined 2% and Peru lower by 1%.

The Silver Institute will be releasing their 2017 Silver Interim Report shortly which will provide an update on current silver production and forecasts for the remainder of the year. However, I believe global silver production will take a big hit this year due to several factors including, falling ore grades, mine closures, and strikes at various projects.

For example, Tahoe Resources was forced to shut down its Guatemalan Escobal Mine in July due to a temporary suspension of its operating license by the country’s Supreme Court. However, even after the Guatemalan Supreme Court reinstated Tahoe Resources Escobal Mine’s license in early September, an ongoing road blockade has hampered the ability of the project to continue mining. Regardless, Tahoe’s silver production declined a stunning 6.7 million oz Q1-Q3 2017 versus the same period last year.

Now, on the other hand, silver production at Fresnillo’s operations in Mexico jumped by nearly six million oz during the first three-quarters of 2017 primarily due to the start-up of its San Julian Mine phase II expansion and a ramp-up of its phase I: 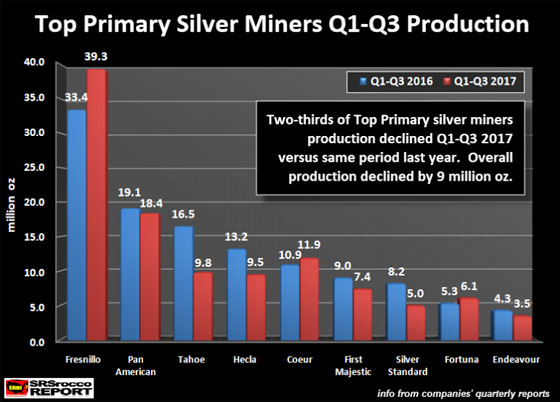 While the gain in silver production at Fresnillo’s operations helped to offset the significant decline at Tahoe’s Escobal Mine, two-thirds of the top primary silver companies in the group experienced a reduction in mine supply this year. Hecla’s silver production fell by 3.7 million oz in the first three-quarters this year due to an ongoing strike at its Lucky Friday Mine in Idaho. Moreover, output at Silver Standard’s Puna operations in Argentina fell by 3.2 million oz due to a 36% decline in ore grade at is open-pit Pirquitas Mine. Silver Standard’s Pirquitas Mine is one of the few open-pit silver operations in the world. The overwhelming majority of primary silver mines in the world are underground operations. 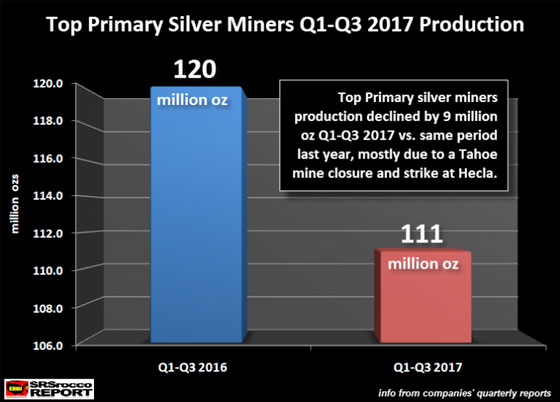 Now, if Tahoe Resources Escobal Mine was not forced to shut down or if Hecla’s Lucky Friday Mine’s strike was resolved, overall production at these top primary silver miners would have likely increased by approximately one million oz this year. Unfortunately for Tahoe’s Escobal Mine and its investors, it may be quite some time before full production resumes. As I have mentioned in previous articles about the troubles plaguing the Escobal Mine by the local and indigenous peoples living by the operation, there are two very different opinions on the underlying problems.

While I have stated that the negative issues put forth by the local and indigenous peoples about the Escobal Mine are likely more valid than the pro-western stance taken by the Tahoe Managment or the Mainstream financial media, time will tell how this is resolved. However, the notion put forth by Tahoe Management that the problems are stemming from “non-locals” who are supposedly radicalizing the locals around the plant, is unfounded when we understand that it is a huge ground-roots movement led by a large percentage of the inhabitants surrounding the mine.

According to the article, Tahoe Resources’ Social Licence in Guatemala Non-Existent, as Uncertainty Plagues Escobal Permits:

Tahoe CEO Ron Clayton is also wrong when he states in a recent press release that community opposition comes from “non-locals”. Lack of social license has dogged Tahoe Resources since the beginning of its project. Since 2011, tens of thousands of residents in eight municipalities around the Escobal mine have voted in municipal plebiscites demonstrating their opposition to the project, or any mining in the area, out of concern for their water supplies, health, and local agriculture. Five municipalities refuse to receive any royalty payments from Tahoe’s mine operations and are now parties to the legal proceedings over discrimination of the Xinka Indigenous population and the Ministry of Energy and Mines’ failure to consult with them.

As the article states, five municipalities refuse to receive any royalty payments from Tahoe’s mine operations and are now supporting legal proceedings. This does not sound like a small group of non-locals instigating trouble. Rather, this has been an ongoing issue ever since the Escobal Mine was initially planned, during its construction phase and ever since it produced its first ounce of silver in 2014.

We will have to wait and see what production figures the Silver Insitute will release in their 2017 Silver Interim Report when it’s published in the next few weeks. Regardless, the world’s economies are being propped up by a massive amount of debt, derivatives and money printing. When the markets finally crack, global silver production will fall considerably as for demand for base metals will drop like a rock. We must remember, 58% of world silver production is a by-product of copper, lead and zinc production. So, when base metal demand falls, so will base metal production.

Thus, as the market and economy continue to disintegrate, global silver supply will fall right at the very same time investment demand surges.