So, why will the U.S. gold market suffer a deficit if gold demand is down sharply this year? Well, it seems as if the culprit is the huge increase in net gold exports. Last year, the U.S. imported 374 metric tons (mt) of gold and exported 398 mt for a net 24 mt deficit. However, this year, estimates for U.S. gold imports will fall to 250 mt while exports increase to 475 mt. Thus, the U.S. net export deficit will be 225 mt in 2017: 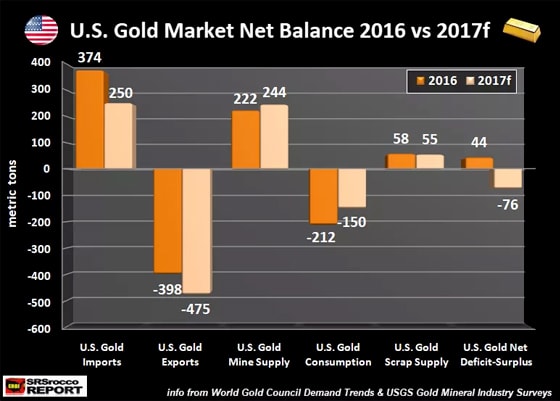 However, if we look at all the data in the chart above, the U.S. gold market will experience a net 76 mt deficit in 2017 versus a 44 mt surplus last year (bars right-hand side of chart). Again, we can see that U.S. gold imports are estimated to decline significantly this year to 250 mt compared to 374 mt in 2016. Furthermore, total U.S. gold exports are forecasted to increase to 475 mt this year versus 398 mt in 2016.

When we factor in U.S. gold mine supply, domestic consumption, and gold scrap supply, the market will go from a small 44 mt surplus in 2016 to a 76 net deficit this year.

So, the question remains… what happens when the markets crack, and retail investors flock into Gold ETF’s as well as surging gold bar and coin demand? This happened in the first quarter of 2016 when the Dow Jones Index only fell 2,000 points in a few months. Gold ETF inflows surged to the second highest quarterly amount ever at 350 mt. The all-time record of quarterly Gold ETF inflows took place during the first quarter of 2009 when the Dow Jones was crashing towards 6,600. During the Q1 2009, Gold ETF flows were a staggering 465 mt.

While precious metals sentiment is currently depressed due to the surging Stock and Cryptocurrencies, at some point, we are going to see a crash in these two markets. The amount of leverage in both markets is off the charts.

I believe the next market crash will cause more investor FEAR than ever. We could see Gold ETF inflows surge above 500 mt while physical bar and coin demand beat all records.

When I was looking at the U.S. Gold Market data, I came across some interesting statistics on worker mine productivity. According to the USGS data, the U.S. gold industry employed 12,000 mine workers in 2016 to produce 7.1 million oz (Moz) of gold. In the U.S. silver mining industry, 785 workers produced 23.2 Moz of primary silver. While total U.S. silver production was 37 Moz in 2016, 13.8 Moz was a by-product of base metal and gold mining.

In the USGS 2014 Silver Yearbook, they break down the top silver mines in the United States. There were only three primary silver mines in the country. These included the Couer’s Rochester mine in Nevada, Hecla’s Lucky Friday Mine in Idaho and American Silver Corp’s Galena mine, also in Idaho. The combined silver production from these three primary mines was 23.2 Moz.

If we take the number of mine workers and divide by U.S. gold and silver production, we have the following: 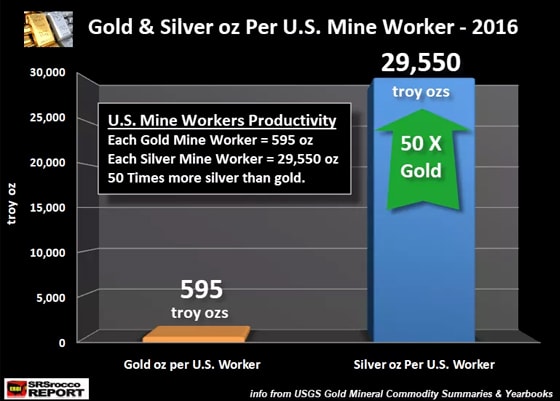 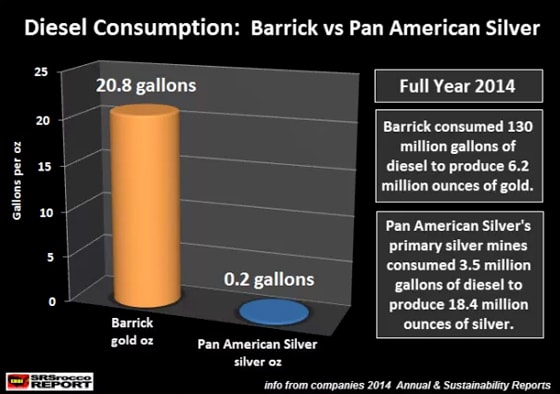 Investors need to understand that the price of gold and silver are based on their cost of production, not the ratio extracted out of the earth. For example, the world produced 886 Moz of silver in 2016 compared to 104 Moz of gold. That is a silver-gold mine ratio of 8.5 to 1. Some readers suggest that the price of silver should rise to the same extraction ratio to gold. Thus, that would be approximately $154 silver.

However, the reason gold and silver were valued closely to the ratio they were extracted out of the earth in the past was due to the mining method. In the past mining was done mostly with human and animal labor. Thus, the 10-15/1 historic gold-silver price ratio was valued based on the extraction ratio. Today, the energy we use is mostly from coal, natural gas, and oil. These carbon-based fuels have distorted the cost of production.

Lastly, the cost to produce gold and silver will no longer function as their MARKET VALUE in the future. The value of most commodities are based on their cost of production, but gold and silver also act as high-quality STORES OF VALUE. When investors finally realize that their wealth investing in STOCKS, BONDS, and REAL ESTATE will continue to vaporize when the stock markets eventually crash, then we will finally see silly crypto price moves in the precious metals.