Chinese demand for physical gold investment surged in the first three-quarters of 2017 while Americans ditched the shiny yellow metal for increased bets in the crypto mania and stock market bubble market. Even though China’s Hang Seng Stock Market outperformed the Dow Jones Index last year, Chinese citizens purchased the most gold bar and coin products Q1-Q3 2017 since the same period in 2013, when they took advantage of huge gold market price selloff. 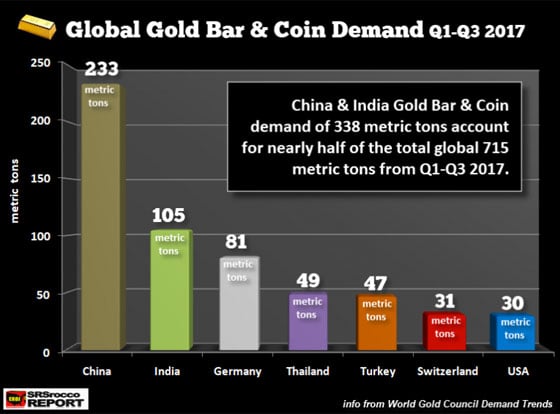 If we compare gold bar and coin demand by these countries in the same period last year, we can see some interesting changes: 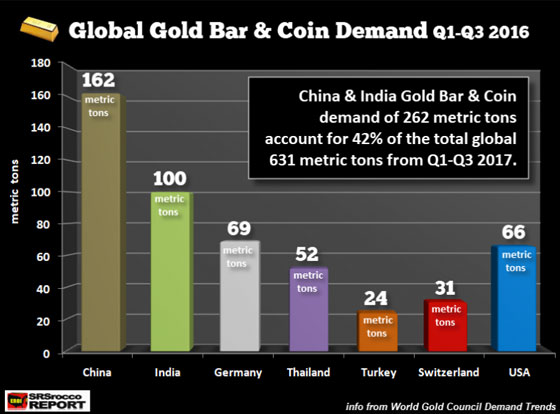 While the increase in Chinese gold bar and coin demand was the big winner (162 mt to 233 mt), Turkish demand nearly doubled from 24 mt in 2016 to 47 mt this year. However, the biggest loser in the group was in the United States. U.S. Gold bar and coin demand fell substantially to 30 mt Q1-Q3 2017 from 66 mt during the same period last year.

As I mentioned at the beginning of the article, Americans shunned gold to make it RICH in the rapidly rising Stock and Crypto Markets. We can see this quite clearly as investors choose to bet on the Dow Jones Index as it surged by 30% last year versus a mere 13.5% for gold: 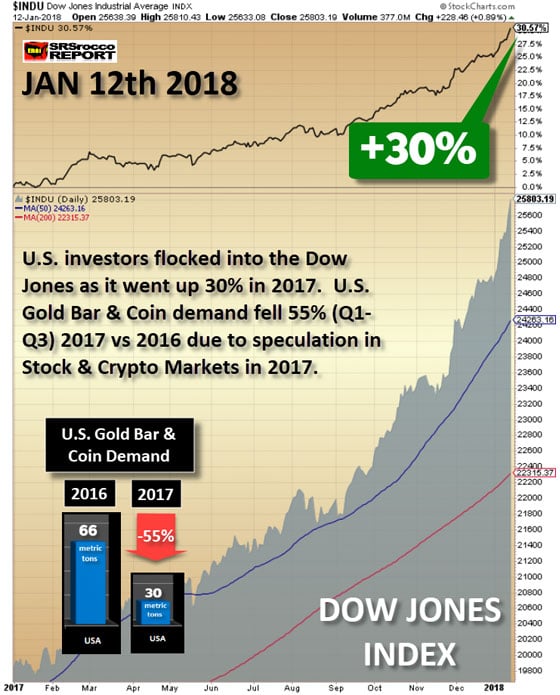 The stunning performance in the stock and crypto markets has frustrated precious metals investors to no end. Not only do I see this all over the internet, but I also receive a lot of emails and comments on my blog. And, it doesn’t help that some precious metals investors, now turned crypto specialists and aficionados, are only happy discussing assets that make 10-20 baggers. Forget about old fashion work and taking the time and money to build something real, we have now moved into a new investment strategy that to be successful, one must make 6-7 figure returns by clicking on a mouse.

All I can say is this… enjoy the Crypto fun while it lasts, because the forces of Gravity will once again bring us back down to earth where making a real living takes a lot of sweat and labor. While some followers sense that I am negative about the cryptocurrencies, I am. However, it is for a good reason. Even though the Blockchain technology offers interesting solutions, the speculative mania is a different story entirely. And, yes.. let’s not forget the tremendous amount of fraud and corruption in the crypto markets. If you don’t believe me, just wait around a while… LOL.

Regardless, while the Dow Jones Index jumped by 30% last year, the Chinese Hang Seng market did one better by surging 43%: 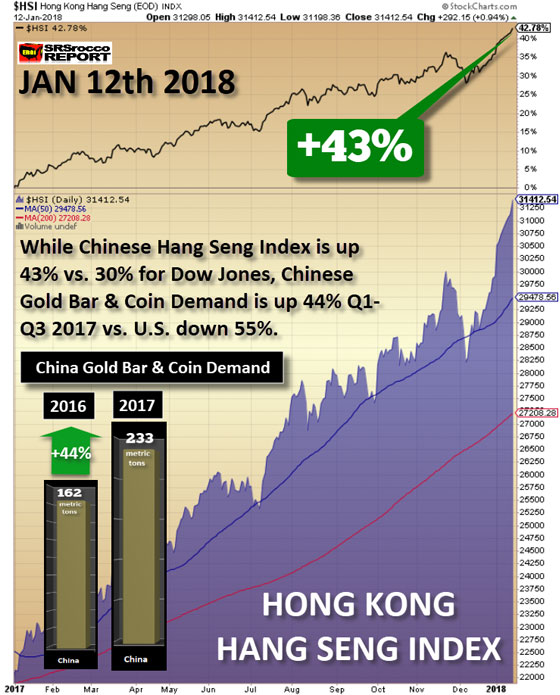 For whatever reason, Chinese physical gold investment demand increased significantly Q1-Q3 2017 while U.S. demand dropped like a rock. It will be interesting to see how 2018 unfolds and if the extreme leverage in the stock and crypto markets finally unravels. You see, it’s not a matter of if, it’s only a matter of time. And, while many believe the Dow Jones will continue higher forever, all markets have to correct. However, the next correction may turn out to be one heck of a crash.