Gary Cohn resigned as President Donald Trump’s Chief Economic Advisor on March 6th. He and Trump didn’t see eye to eye on the recently imposed tariffs and the President selected CNBC commentator Larry Kudlow to replace him Wednesday. Perhaps it was Kudlow’s experience on television that got him the job. 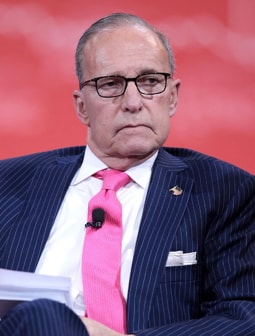 It doesn’t look like he was chosen for his intellectual honesty. Kudlow was quite vocal with his own opposition to tariffs.

He has suddenly done an about face and now says he can “live” with targeted tariffs. However, it gets worse than simply flip-flopping on trade.

In one of his very first interviews after accepting the post, Kudlow offered this bit of advice to investors: “I would buy King Dollar and I would sell gold.”

The dollar went on a dramatic losing streak during Trump’s first year in office – one of its worst annual performances in decades. Of course, that is just a single year.

The fiat dollar has been in almost continual decline versus real assets since the Federal Reserve’s establishment 105 years ago. It has lost 98.5% of its purchasing power relative to gold since then.

Kudlow must have seen the forecasts which show federal deficits spiking higher as the combination of tax cuts and higher spending wreak havoc on the budget. The tariffs should further weigh on the U.S. dollar as higher steel and aluminum prices drive inflation.

The prospects for the U.S. dollar are downright awful and Kudlow isn’t advocating for reforms which might improve that outlook. Instead, he is vocally advocating for the Federal Reserve to slow down on interest rate hikes.

It’s hard to believe anyone today could be particularly bullish on the greenback. Now that Kudlow is getting a federal paycheck, he is simply toeing the company line like he did for years at CNBC.

Kudlow has made a name for himself by constantly hyping the economy and stock market, cheering for “king dollar,” and criticizing gold – much to the detriment of viewers who followed his advice ahead of the 2008 financial crisis.

We’ll be paying particularly close attention to Kudlow’s moves now that he’s in the Trump administration. Early indications are not positive.