As the BLOOD continues to run on Wall Street, gold and silver were the few assets trading in the green today. As I have mentioned in past articles and interviews, investors need to get used to this sort of trading activity. Even though the Dow Jones Index ended off its lows of the day, it shed another 458 points while the Nasdaq declined 190 points and the S&P fell 60.

As the broader markets sold off, the gold price increased $15 while silver jumped by $0.25. However, if we look at these markets during their peak of trading, the contrast is even more remarkable: 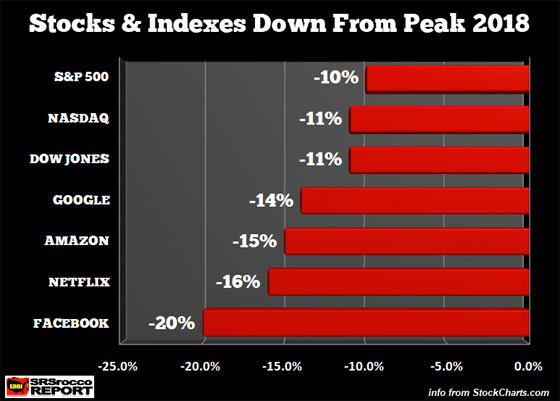 Furthermore, if we agree that supply and demand forces are impacting the oil price to a certain degree, does anyone truly believe oil demand won’t fall when the stock market drops by 50+%??? I forecast that as market meltdown continues, the oil price will decline as oil demand falls faster than supply.

Now, when the markets were at their lows today, gold at its peak was up $20 while silver increased by $0.44. Of course, this type of trading activity won’t happen all the time, and we could see a selloff in all assets some days. But, once the Dow Jones Index falls below 19,000, investors will likely start to move into gold and silver in a much bigger way.

If we look at the following stocks and indexes from the peaks set in 2018, clearly, there’s a long way to go before the bottom is in: 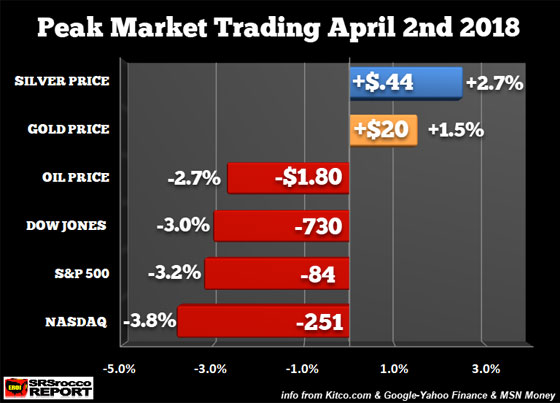 So, what would a 60% selloff in the broader markets due to the gold and silver price?? That’s a good question. If just 1% of the $400 trillion in global assets moved into the precious metals, we could see some insanely higher prices. But, I don’t like to put out price targets because analysts who have done so in the past only frustrate themselves and their followers.

The next two charts show the beginning stage of the MARKET MELTDOWN as it pertains to the grossly overvalued stock called Netflix. When I posted this stock a few weeks ago, Netflix was trading at $310 a share. I mentioned that its recent stock trend resembled the antenna on the Empire State Building in New York City: 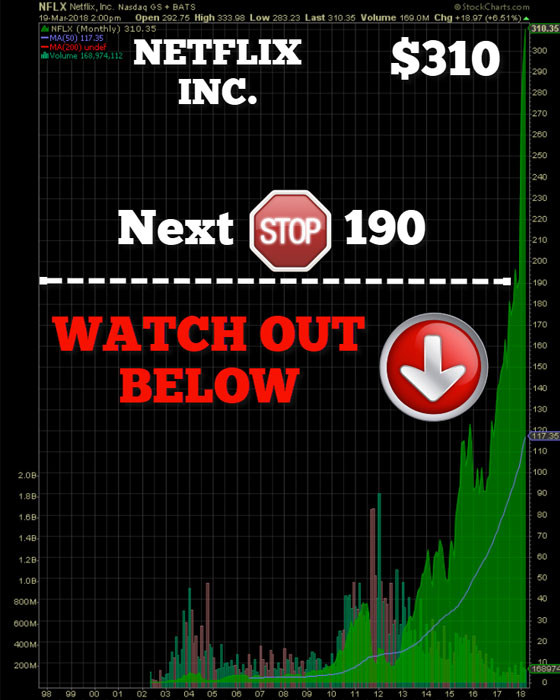 Unfortunately, the top of Netflix’s antenna must have been chopped off by some low flying 747 jetliner over the past two weeks: 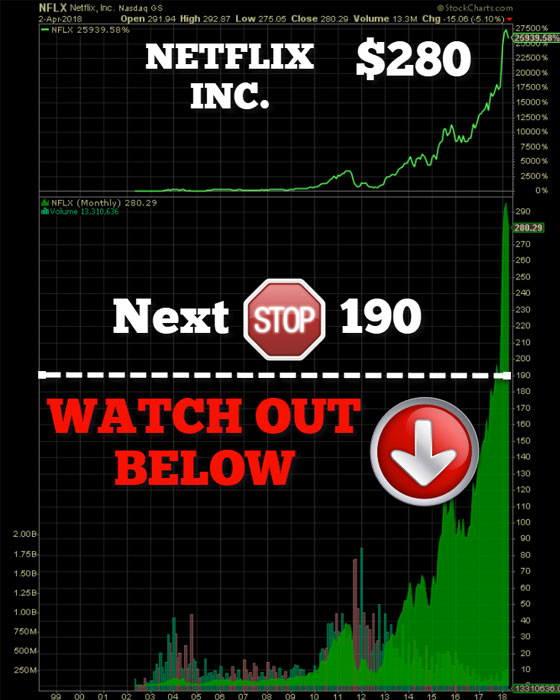 Since March 19th, when Netflix was trading at $310, it has lost $30 or nearly 10%. If investors believe Netflix is a good BUY THE DIP setup, well then I gather it’s a complete waste of time to suggest acquring some gold and silver instead. However, if you are beginning to get worried that the market has a long WAY TO GO DOWN, then you may want to consider switching from BUILDING WEALTH to PROTECTING WEALTH.

Mark my words… 2018 will be the year that investors started switching from building wealth to protecting wealth. Unfortunately, those who make this change will likely only be a small percentage of the market. Thus, we are probably going to see a lot more BLOOD IN THE STREETS.