FRAGILE NATURE OF CURRENCIES: Why Gold & Silver Are High-Quality Stores Of Value

As the U.S. and global economy speed towards the Seneca Cliff, very few individuals understand the fragile nature of currencies. Today, we use the lightning speed of the digital banking system to make our purchases at the store or online. It has become seemingly natural to buy groceries at the swipe of a card. Only a small percentage of purchases are made with cash… paper money.

However, our high-tech digital banking system is built upon a highly complex system that consumes a massive amount of energy just to maintain business as usual. There’s this notion that technology will grow exponentially while at the same time making our lives easier. TV commercials are showing how individuals today have more power at their fingertips than entire generations in the past. While this is currently true, I can assure you; we are not heading into a high-tech world where robots do everything for us.

Unfortunately, due to the rapidly Falling EROI – Energy Returned On Investment and the thermodynamics of resource depletion, we are heading into a future with much less technology and a great deal more human labor. I know, it sounds insane to say that, but it’s true. Human labor and human farming have a much higher EROI than any technology used today.

In my newest video, I discuss the Fragile Nature of Currencies and why gold and silver are the high-quality stores of value. I released the video yesterday on my youtube channel and already there a lot of comments. One individual commented that the information about the “lifespan of the servers” was inaccurate. The individual stated that the reason servers are replaced is that it’s cheaper to buy a new one than maintain an old one. Well, you see… that is the CURSE OF TECHNOLOGY.

Furthermore, most experts agree that CRITICAL PRODUCTION SERVERS should not be used more than five years:

Most of the experts agree that critical production servers should last about five years and should be replaced or at least moved away from critical applications or off production altogether. As mentioned, many opt to upgrade drives or power supplies halfway through the five years make them last longer. Once the warranty is up, there’s no saying how long it will last and at that point, you’ve got to pay to replace anything that fails anyway, but there’s no need to let downtime be another cost.

Looking back in history, we can see the progression of technology and how things don’t last as long as they used to. There are several reasons for this, but if we consider the mechanical gauges found in older cars, they can last for decades and I have seen some still working after 50 years. However, the new digital gauges start wearing out after 5-10 years. High-tech gauges are nifty, but they are not durable or long-lasting. This is the very same situation with our current digital banking system.

Which is why I believe gold and silver will once again become the high-quality stores of value in the future as technology starts to fail in a BIG WAY.

At the beginning of the video, I start off with an update on the markets. I discuss two charts by Jill Mislinski at Advisor Perspectives. One of the charts below shows the inverted margin debt versus the S&P 500: 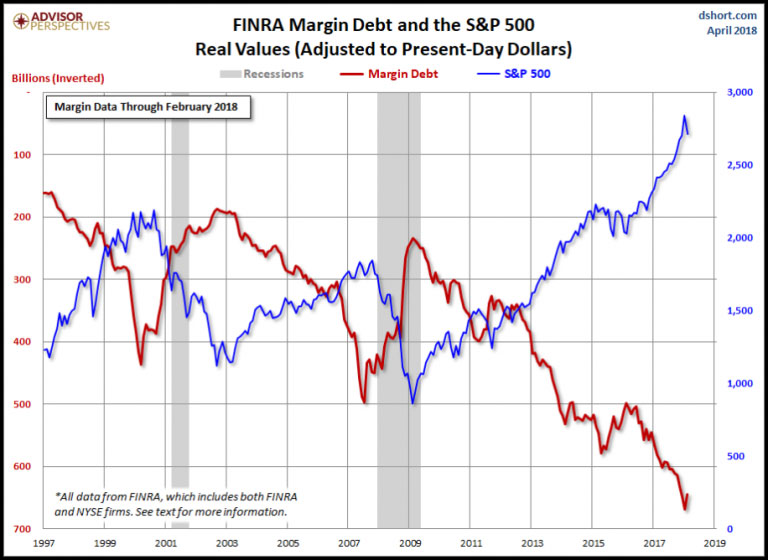 Individuals, whether they are mainstream or alternative (sound money) investors need to understand ENERGY and the FRAGILE NATURE OF CURRENCIES. Unfortunately, a large percentage of my precious metals followers don’t read or watch my energy articles and videos because they just don’t have the time or interest. THIS IS A SERIOUS MISTAKE. However, I don’t blame them because most of the top precious metals analysts don’t understand our dire energy predicament either. So, the blind continue to lead the blind.