WAITING FOR THE BUY SIGNAL: When is the Best Time to Buy Silver?

The Silver Market is setting up for one heck of a move higher as investors are waiting for the signal to start buying. While the silver price has shot up due recently, it still isn’t clear if this is the beginning of a longer-term uptrend. The reason for the quick spike in silver was likely due to a small short-covering rally by the Large Speculators trading on the Comex. 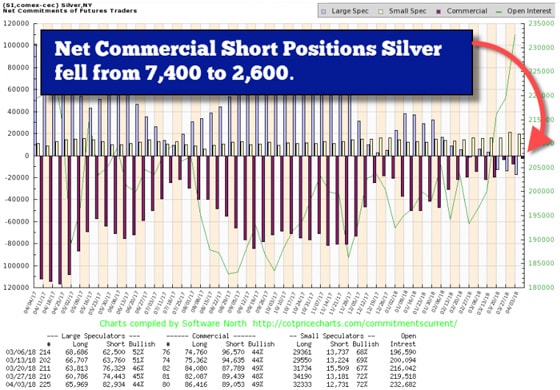 However, it’s difficult to know if this is the start of a long uptrend in the silver price. It’s coming, but I just don’t know if this is it yet. We will know when the Silver price is making a big move when it finally gets above $20 as the broader markets crash. Now, many silver investors might be a bit frustrated because silver sentiment and investment demand dropped to a low last year.

In 2017, demand for silver declined as investors were lured into the stock and crypto market bubbles. According to the data put out by the 2018 World Silver Survey, total Global Silver Bar & Coin demand declined from 207.8 million oz (Moz) in 2016 to 151.1 Moz last year. As we can see in the chart below, global silver bar and coin demand fell by 27% compared to 2% for physical gold investment: 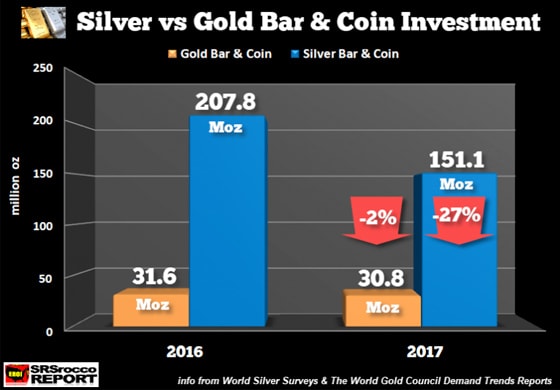 The World Gold Council reports that global gold bar and coin demand fell to 30.8 Moz last year versus 31.6 Moz in 2016. However, the decline in physical gold investment would have been even more substantial if it wasn’t for gains China, Turkey, and the Middle East to offset significant reductions in the United States. Gold bar and coin demand fell by 58% in the United States last year. And we saw the same trend take place in the silver market. 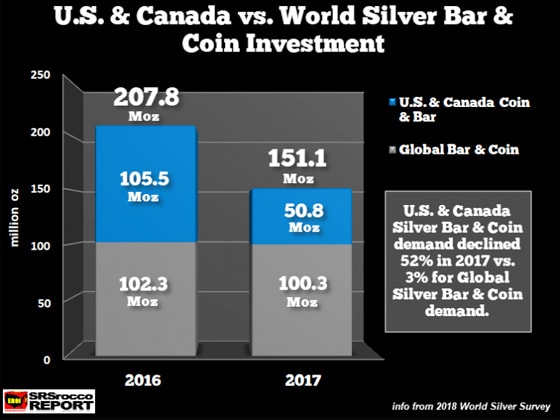 According to my analysis, demand for physical silver and gold investment declined last year in the United States due to three reasons:

Unfortunately, 99% of investors continue to pile into extremely overvalued and highly leveraged-margined assets in history. The value of stocks, bonds, and real estate are at the highest levels ever while the world’s oil industry is coming under a great deal of pressure that few are aware.

The U.S. Shale Oil and Gas Industry is a $250+ billion Ponzi Scheme that Bernie Madoff would be jealous. So, the BIG MOVE in silver is likely to occur right when the broader markets and the oil price collapse in unison.