The Two Most Important Reasons To Invest In Gold & Silver 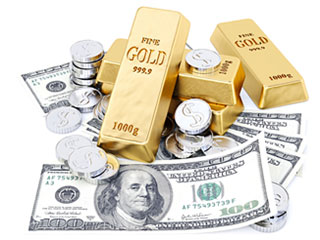 As the markets and financial system continue to be propped up by an ever-increasing amount of debt and leverage, precious metals investors need to understand the two most important reasons to invest in gold and silver. While one of the reasons to own precious metals is understood by many in the alternative media community, the more important critical factor is not.

The motivation to write this article is due to the increasing amount of negative sentiment and comments in regards to precious metals analysis and investing. There’s a very interesting notion put forth by many commenters that the precious metals analysts and dealers are the frauds and charlatans, not Wall Street or the Central Banks. I imagine they believe this because gold and silver prices haven’t performed as forecasted or compared to the insanely inflated stock, real estate, and crypto markets. If you look into the price of a silver bar or coin you will be able to understand more on how the market works, the same goes for gold bullion.

Before I discuss the two important reasons to own precious metals, I would like to provide some information about the fraud and corruption taking place in the financial industry.

Now, it is true that a few precious metals dealers have defrauded investors, but this is true with all sectors and markets in the financial industry. However, investors frustrated with the precious metals tend to forget the massive amount of fraud and losses that took place as a result of the 2008 Housing and Investment Banking collapse.

For example, according to the article, Financial Crisis Bank Fines Hit Record 10 Years After The Market Collapse:

$150 billion (127.6 billion euros) – that’s how much US authorities have collected in fines from financial institutions for shady dealings with subprime mortgages since the beginning of the credit crisis in 2007, according to research by the British business daily Financial Times (FT).

Of all the banks penalized since 2008, Bank of America (BofA) was hit the hardest by far, as FT research shows. So far, BofA has handed over a whopping $56 billion – more than one third of total fines paid – in settlements to cover the institution’s own mortgage sales as well as the conduct of subprime mortgage lender Countrywide and broker Merrill Lynch, two companies it had acquired.

JP Morgan Chase, the owner of Bear Stearns and Washington Mutual, has paid the second-largest amount with $27 billion.

So, in ten years, financial institutions have paid $150 billion in fines mainly due to the fraud behind the subprime mortgage industry. I would like to remind the reader that the banks don’t pay these fines from their pocket, it comes from their investors.

Then we had the wonderful Libor rigging scandal in which three banks paid $2.5 billion. In the CNN article, RBS Fined $600 Million, More to Come:

Three banks have so far paid over $2.5 billion in Libor fines.

The Royal Bank of Scotland has been fined $612 million by regulators after an investigation found 21 bank employees tried to rig global benchmark interest rates over a period of four years.

Now, let’s compare the total value of all Gold and Silver Eagles sold since 1986: 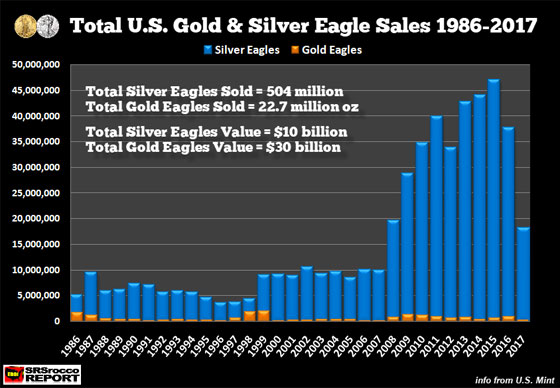 If we look at total Silver Bar and Coin investment from 2007 to 2017, we can see that it pales in comparison to the massive fines paid by the world’s largest banks and financial institutions: 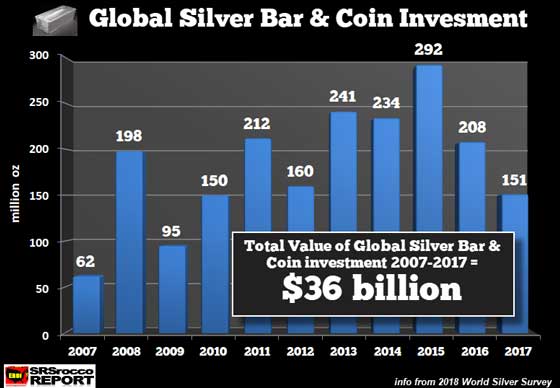 So, how does $36 billion in the total value of world Silver Bar and Coin investment compare to the $150+ billion in global financial fraud? You see, it’s easy for frustrated investors to disregard the tremendous amount of fraud, corruption, and deceit taking place in the world’s largest financial institution when it’s so much easier to point fingers at precious metals analysts and dealers.

Furthermore, I will suggest that the $150+ billion in fraudulent fines paid by banks (business as usual) is only the tip of the iceberg to come. However, when the markets roll over and crash lower, I highly doubt these banks and financial institutions will have the funds to pay the Bigger fines in the future.

One last thing on this subject of fraud and corruption. As I have stated over and over, the U.S. Shale Oil Industry is a Ponzi Scheme that Bernie Madoff would be jealous. According to this recent article, How Wall Street Enabled the Fracking ‘Revolution’ That’s Losing Billions:

The U.S. shale oil industry hailed as a “revolution” has burned through a quarter trillion dollars more than it has brought in over the last decade. It has been a money-losing endeavor of epic proportions.

If the U.S. financial crisis of 2008 has revealed anything, it is that Wall Street isn’t concerned with making a “shitty deal” when it means profits and bonuses for its traders and executives, despite their roles in the crash.

With Wall Street making substantial fees on BAMBOOZLING clients into investing in the shale energy industry, few if any will receive the return of their funds. Thus, a large percentage of the $250+ billion and growing of debt on the balance sheets of shale oil and gas companies will never be repaid. Therefore, the $250+ billion of shale oil fraudulent investor funds would equal nearly seven times the 2 billion oz of global Silver Bar & Coin purchased 2007-2017.

Again, just another lil tidbit that is overlooked by investors who are unable to understand the TOTAL FRAUDULENT PICTURE taking place on Wall Street and at the Central Banks.

Two Most Important Reasons To Invest In Gold & Silver

The first important reason to own gold and silver is for INSURANCE against a financial meltdown and or disintegration of fiat currency… just like what is taking place in Venezuela. Holding precious metals as an insurance policy isn’t anything new to gold and silver investors, but it seems as if a percentage may have forgotten this critical role.

Most individuals understand the importance of owning auto or housing insurance but have no idea why it’s also wise to purchase precious metals insurance. Furthermore, most people would choose to buy health insurance for at least catastrophic protection in case of major accident or severe illness. Again, insurance is designed to protect individuals against substantial financial losses from auto, home or health-related risks.

For that reason alone, precious metals should be purchased on an ongoing basis just like most other insurance policies. While some of us have paid auto insurance without any accidents, we are sure glad we have it when one finally arrives.

This should also be true for precious metals investment, especially when we look at the following chart: 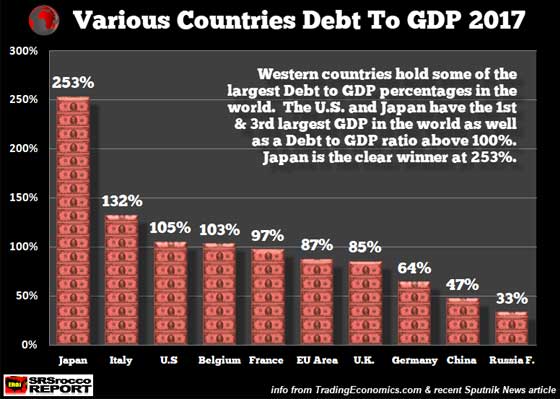 Unfortunately, the U.S. economy is now adding more than $4 in debt for each new $1 in GDP growth. This trend of adding four times the amount of debt to grow the GDP isn’t sustainable for much longer.

Here is just another factor that some investors fail to recognize when they are demonizing precious metals analysts and dealers. What’s currently taking place with the low precious metals sentiment is very similar to what happened to the main actor in the movie, THE BIG SHORT: 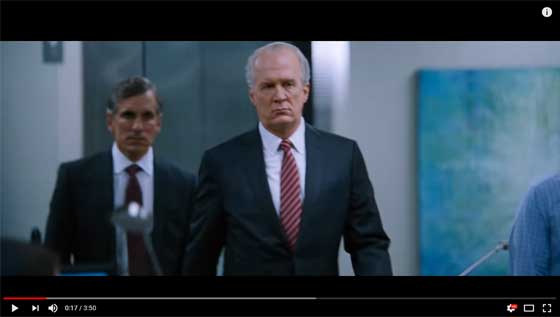 I would suggest everyone watch this short video which you can view by clicking on the image or here: BIG SHORT SCENE. Warning… there is a bit of harsh language, but even when things get rough, people become very frustrated and angry. While it is a movie, it is based on the factual evidence that large investors wanted their money back because they could not understand that the Housing Market Rotten to the core. Seemingly 99% of investors believed in the lies being told by the Federal Reserve and Wall Street.

What is coming this time around is even worse than 2008. But, of course, frustrated investors will continue to blame precious metals analysts and dealers because they do not understand the fundamental problems in the economy and financial system.

If you watched the Big Short video above, then you would understand that most people do not see the problem in the next chart: 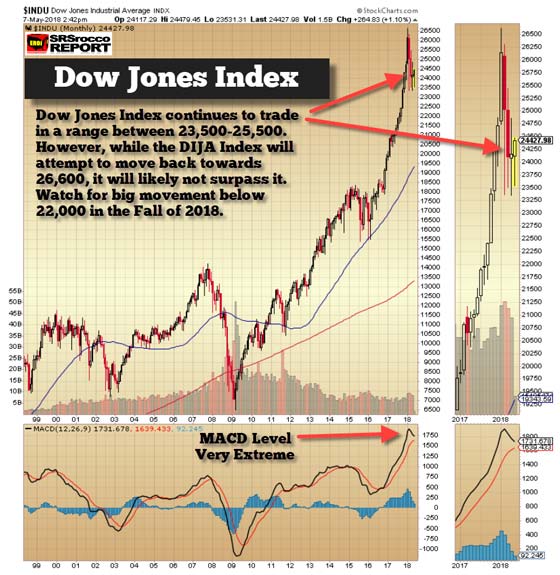 If the Dow Jones Index was in a bubble in 2007, its nearly twice the bubble today, and the MACD technical level shows it. I saw one of my Dow Jones charts on another website, and a someone commented that the person who made the graph doesn’t understand the MACD technicals. Not only do I find this amusing, if true, people are in serious trouble if a RED WARNING LIGHT now means everything is okay.

But, this is only part of the problem. The major issue is ENERGY. While the U.S. Shale Oil industry is producing a record amount of oil, it has done so be defrauding investors by hundreds of billions of dollars. I have correspondence with people in the oil industry, and I can tell you, there is a big difference between someone who has been drilling for oil for 50 years and the new high-tech companies.

The old wildcatters took a lot of private investor money, so they dealt with them FACE TO FACE. Today, the U.S. Shale Oil Industry is predominantly made up of public companies because they need to get money from investors they don’t see or care about. Thus, the Shale Oil Industry is much like the Subprime Mortgage Industry that took crap loans and sold them to other naive investors. Same SCAM, just a different industry.

A perfect example of the SCAM called Shale Oil can be seen by the evidence from Fractional Flow on the Bakken: 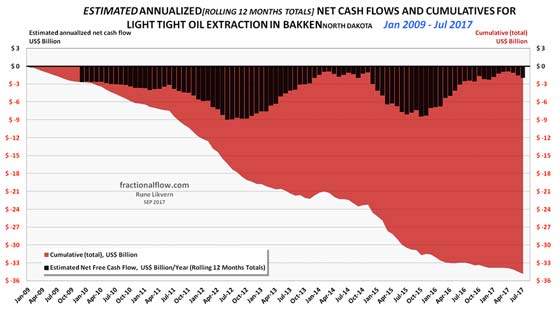 Rune Likvern, who has decades experience in the oil and gas industry, shows that the Bakken hasn’t provided ONE PENNY of positive Free Cashflow since it started ramping up production in 2009. Moreover, his estimates the companies producing shale oil in the Bakken have suffered a combined negative $35 billion free cash flow 2009-2017.

While Americans used this oil to buy gobs of stuff from Walmart and Amazon to fill their homes and storage units, the investor will eventually be holding the bag for hundreds of billions in losses. But, I guess this is okay… IF IT AIN’T ME… correct? Well, that seems to be the mentality today, and especially coming from the management and investor relations folks running the Great U.S. Shale Oil & Gas Ponzi.

When the U.S. Shale Oil Industry finally collapses under the weight of debt and soon to be uneconomic wells outside the core shale fields, then it would be an excellent time to be invested in Gold and Silver.

However, it will take some and likely more frustrations as investors are blinded by the enormous gains in the stock, real estate, and crypto markets. But, as I have said many times… GOD HATH A SENSE OF HUMOR.