The total U.S. public debt hit a new record high of $21.145 trillion on the last day in May. As the U.S. debt increased, so did the interest expense which jumped by more than $26 billion in the first seven months of the fiscal year. That’s correct; the United States government forked out an additional $26 billion to service its debt (Oct.-Apr) versus the same period last year.

While the U.S. debt reached a new high on May 31st, it took nearly two months to do it. Let me explain. During tax season, the total U.S. public debt actually declined from a peak of $21.135 trillion on April 10th to a low of $21.033 trillion on May 3rd. Since then, the U.S. debt has been steadily moving higher (including some daily fluctuations): 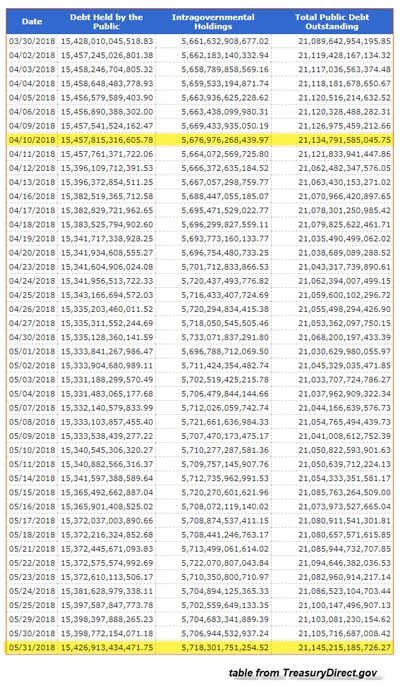 If you spend some time on the TreasuryDirect.gov site, you will see that the total public debt doesn’t go up in a straight line. There are days or weeks where the total debt declines. However, the overall trend is higher.

As I mentioned, the U.S. government paid an additional $26 billion to service the debt than it did last year. Now, $26 billion may not seem like a lot of money these days, but it could buy the total global Registered Silver inventory:

Thus, the extra $26 billion paid by the U.S. Treasury to service its debt would have purchased the 1+ billion ounces of silver held in the COMEX (270 million oz) and all the Global Silver ETFs. And, this would include the 138 million oz of silver supposedly stored at the JP Morgan vaults.

However, with the remaining $10 billion ($26 billion minus $16 billion), the U.S. government could have also purchased all the American Eagle silver bullion coins minted since 1987. According to my figures, the U.S. mint sold over 510 million Silver Eagles from 1987-2018. If we give a value of $20 for each, that would be roughly $10.5 billion.

And remember, this is just the ADDITIONAL interest expense paid from Oct-April to service the massive U.S. public debt. If interest rates continue to stay the same or rise for the remainder of the fiscal year, the U.S. government will likely pay between $45-50 billion more in 2018 to service its debt.

Lastly, I am quite surprised by some of the analysis coming from the precious metals community. I will be writing about this at length in a new article, but it’s quite frustrating to see precious metals analysts totally disregard energy in their work or change the facts to promote a certain ideology.

For example, Bix Weir recently posted a new video on the “10 Reasons to own Silver.” While I agree with some of the reasons he states to own silver, I was quite stunned to see Mr. Weir state in his 8th Reason was due to a 1/1 Ratio of Gold to Silver. Bix remarked that there were about 6 billion ounces of above ground gold and silver, so this One-to-One ratio meant that silver was undervalued.

I get it. However, Bix has been claiming that the world has millions of tons of gold in the world. But if he states there are 6 billion oz of gold above ground, that is roughly 187,000 metric tons… a figure that I have reported to be accurate for several years.