WHY HARRY DENT’S $400 FORECAST FOR GOLD IS WRONG…. Price Is Heading Up Much Higher

Harry Dent has been making the rounds suggesting that for gold to get back to its pre-bubble price, it would need to fall to $400 or $450. If we were to believe Mr. Dent, then it would be bad news for gold investors. However, Harry Dent’s gold price forecast is quite faulty because he fails to consider the most critical factor.

Harry Dent has become well-known on the internet for his $750 gold price forecast. He bases a low gold price upon what he calls “The end of the Commodity Super-Cycle.” Dent sees nothing but massive deflation ahead. Thus this will cause the gold price to fall along with all commodities.

Unfortunately for Dent, his gold price forecast is incorrect because he fails to incorporate the Falling EROI (Energy Returned On Investment) and energy into his analysis. Dent, like many in the financial industry, believes in the “Energy Tooth Fairy” (a term coined by Louis Arnoux). What I mean by the Energy Tooth Fairy is the notion that economy will continue to grow forever because plenty of cheap energy will always be available. Thus, economic and business cycles, forecasted by Dent, will also continue forever.

Before I explain in detail why Dent is totally wrong on his $400 gold price forecast, here he is in a recent interview on Kitco:

Dent makes several forecasts in the interview, but his price target for gold is the most startling for precious metals investors. He says gold is heading for $650-$750, but that is just the first target. Dent then says, “Ultimately for gold to erase its bubble and get back to its bubble origin, it would be $400-$450. Once gold hits $400 or $450, then Dent would be a buyer.

I gather Dent is suggesting that gold became a bubble in 2004 when it went above $400 an ounce:

I imagine Dent arrives at his $400 gold price forecast from using the Eliot Wave Theory of technical analysis. While technical analysis is an excellent tool to forecast price, it doesn’t incorporate the changing energy dynamic that controls the price of most goods, commodities, metals, energy, and services. Which means, Harry Dent is forecasting in a vacuum, or without the most crucial component… ENERGY.

For example, does Dent realize the cost of gold production has skyrocketed since 2004? The following chart shows the top four gold miners estimated total cost versus the gold market price: 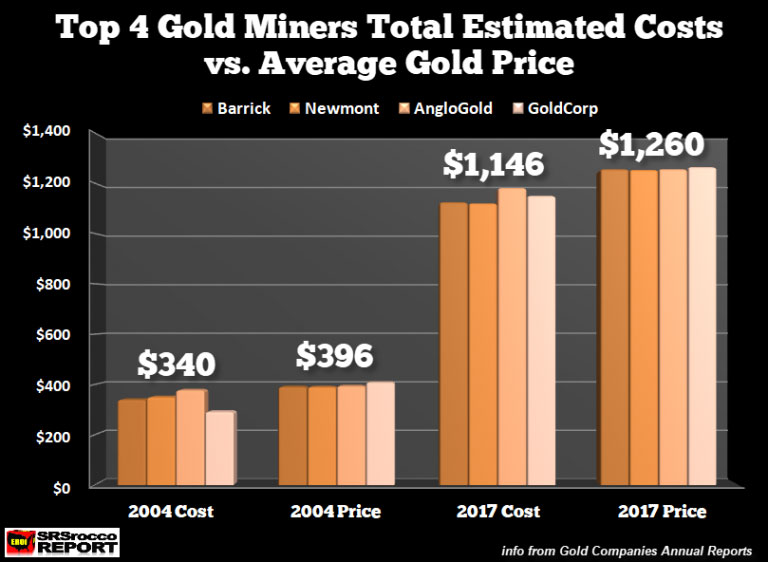 In 2004, the top four gold miners (Barrick, Newmont, AngloGold & Goldcorp) average estimated total production cost was $340 an ounce based on an average $396 realized price. I calculate the estimated total production cost by using the net income or adjusted income as a percentage of total revenues. Thus, the average profit margin for the top gold miners in 2004 was 16%.

Now, compare that to an estimated production cost of $1,146 in 2017 while the group received $1,260 an ounce for selling their gold. The top four gold miners average margin of profit in 2017 was approximately 10%. So, the gold miners aren’t getting rich producing the King Monetary metal.

Again, how can Dent forecast a pre-bubble $400 gold price, if the average total production cost is nearly three times higher? 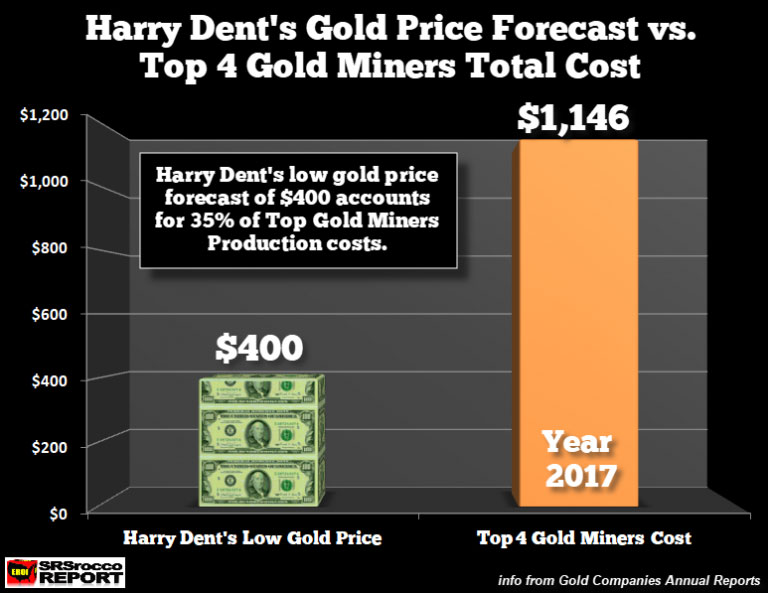 Dent’s failure to understand how energy is impacting the gold price (and everything else) will come back to bite him hard in the future. If the gold price fell back to $400, that would utterly destroy the gold mining industry. I haven’t seen one gold mine profitable at a price anywhere near $400-$450.

Of course, this doesn’t change the fact that analysts such as Dent will continue to make short-sighted and incorrect forecasts because they haven’t taken into account the vital ENERGY COMPONENT.

Now, if we take a very conservative approach at the gold mining industry’s basic cost of production, the price is still more than double than Dent’s $400 price:

Furthermore, the gold mining industry’s costs are rising a great deal more in percentage terms than the oil price. For example, let’s take a look at the change in oil price and the top four gold miners total production cost:

While the oil price has increased by 41% since 2004, the top four gold miners total production cost has increased by 237%. How can the gold price be in a bubble if it costs 237% more to produce it today than it did in 2004?? Does Dent believe really believe that the Eliot Wave Theory or supply and demand forces are the only indicators of the price??

The next chart shows the total production cost from Barrick and Newmont versus the gold market price: 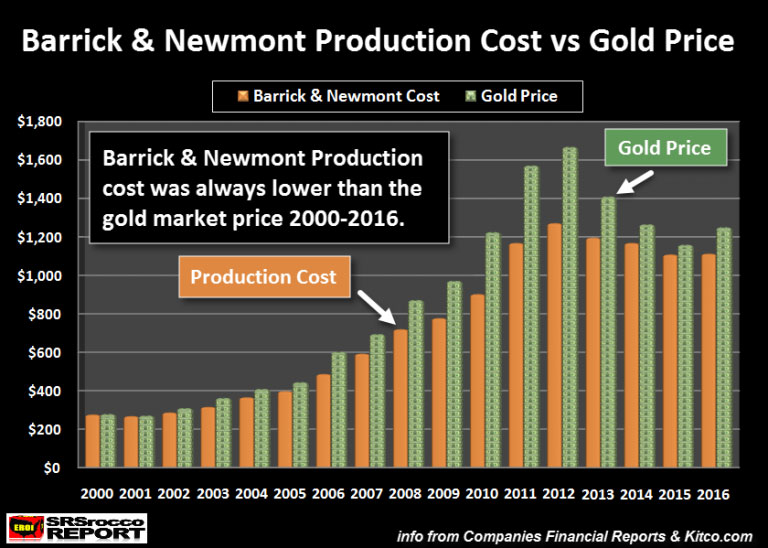 If we are going to utilize “supply & demand” forces in determining price, then more demand in 2012, pushed the gold price nearly $400 above Barrick and Newmont’s total production cost. Analysts need to realize that supply and demand move the price of goods, commodities, metals, and energy above or below their cost of production trend line. However, the gold mining industry continues to sell gold for more than its total cost. And, I believe this has been true for quite some time.

Now, if we want to spot a real bubble, let’s compare the Gold Chart with the Dow Jones Chart: 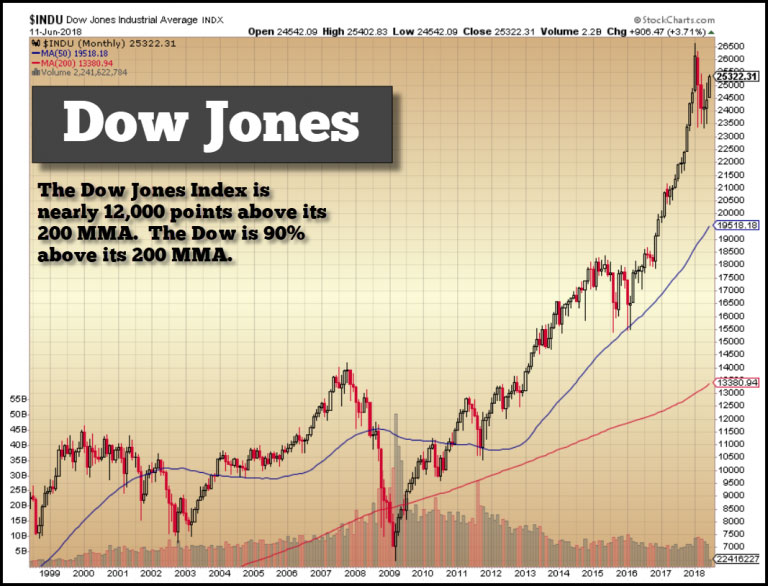 Now, I am not saying that the gold price will fall to its 200 MMA of $975, but to claim that gold is going to its pre-bubble price of $400 in 2004 is preposterous when we understand the tremendous production cost increase to produce the shiny yellow metal.

While Dent believes most assets will decline during the next big deflation, he argues that the safe place to be is in cash or U.S. Treasuries. While it may be a good idea to hold some cash during a meltdown, U.S. Treasuries, especially the 30-Year Bond, are going to be toast when the world experiences a “Seneca Cliff” decline in U.S. and global oil production. Without cheap and abundant oil, all the debts will implode in the future.

We must remember, U.S. Treasuries are not assets per say, they are obligations or debts to be paid in the future. Because Dent does not understand how the Falling EROI of oil is destroying the global economy, he can claim that gold will go to $400.

However, as debts and assets disintegrate in the future, the safe assets to own will be the precious metals. Thus, gold will hold (or increase significantly) its value versus the majority of assets.