There are two crucial factors why Silver will increase more in value than gold during the next financial meltdown. These factors are not well known by many precious metals analysts because they focus on antiquated information and knowledge. While several individuals in the precious metals community forecast a much higher Gold-Silver ratio during the next financial crash, I see quite the opposite taking place.

For example, Lynette Zang, at ITM Trading, has suggested in recent videos, that the gold to silver ratio will increase significantly during the upcoming currency reset. She believes this based on the idea that gold is more the primary monetary metal and has published data showing the surging gold-silver ratio that took place during the end of the Weimar Germany hyperinflation.

Yes, it is true that the gold-silver ratio shot up to 160/1 during the last month of the Weimar hyperinflation, but there was a specific reason why that I will explain shortly. However, the main disagreement that I have with most precious metals analysts on the future value of gold and silver is based on their failure to incorporate “Energy” into their research, work, and forecasts.

While Lynette Zang educates her followers on why it is important to own gold and silver, she does not understand the dire energy predicament we are facing. Thus, she is missing the most critical factor in her analysis. Even the diehard precious metals bull, Peter Schiff, does not understand the negative consequences of the Falling EROI (Energy Returned On Investment) and the thermodynamics of oil depletion. Schiff believes that if the debt was wiped clean and the banks were liquidated, then we could start a new economic boom based on sound money.

However, the collapse of debt and the banking system would destroy our modern economy… for good. There is no way we could survive a cleansing of the debt-based monetary system. Without the debt, most assets have no value.

In Zang’s recent interview CLARIFICATION: Silver/Gold Ratio (Function Vs Fiat), she posted this table of the changing gold-silver ratio during the Weimar Germany hyperinflation: 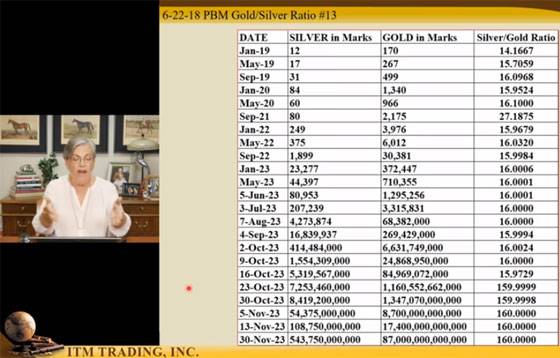 According to the article, Gold and Silver: Lessons From Weimar Germany, the following chronology of events had a big impact on the gold-silver ratio:

There is no coincidence that the value of gold to silver surged during the Communist takeover of Hamburg on Oct 23, 1923. Germans who were fearful of the 1917 Bolshevik Revolution taking place all over again, were selling their silver for gold so they could easily transport it out of the major cities. However, after the “Communist threat” was finally resolved, the gold-silver ratio fell back to its normal level.

Thus, those Germans who traded their one ounce of gold for 160 ounces of silver during this tumultuous time enjoyed a tremendous gain when the value of gold and silver normalized.

Regardless, the reason I see the value of silver rising more than gold in the future:

As I have mentioned in many articles and videos, Stocks, Bonds, and Real Estate derive their value from the burning of “more” energy in the future. It is essential that you understand the use of “More” in the previous sentence.

When global oil production declines, so will growth and GDP. Without growth, the highly leverage debt-based financial and economic system will disintegrate. Thus, as investors move into precious metals to protect wealth, as Stocks, Bonds, and Real Estate were illusions of wealth, the available amount of silver to gold is nearly an ONE to ONE ratio: 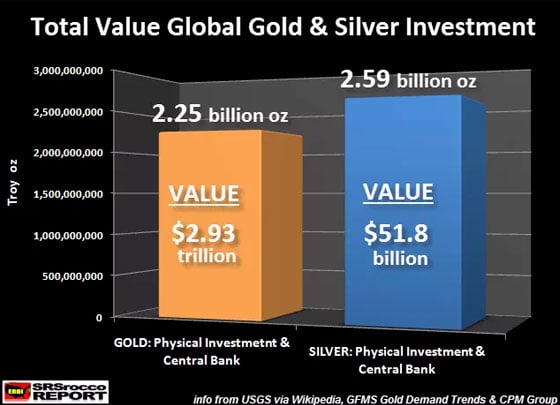 The data in this chart was from last year, but the physical ratios haven’t changed all that much. As we can see, there was 2.25 billion oz of investment gold above-ground versus 2.59 billion ounces of investment silver. When regular investors begin to rotate out of increasingly worthless Stocks, Bonds and Real Estate and into precious metals, there just isn’t that much more silver than gold for investors to acquire.

I believe the KEY FACTOR missed by most precious metals analysts is that failure to understand that during the collapse of global oil production, most business and real estate will become increasingly dysfunctional. Thus, it won’t be prudent to take one’s higher valued gold and silver to purchase depressed residential and commercial real estate during the market meltdown, because the Suburban Economy will continue to contract over the next several decades.

Lastly, I don’t include Platinum or Palladium in the group of precious metals to own in the future. While demand for these industrial metals has been quite robust, once the global economy collapses, so will the production of automobiles… and with it, the high demand for platinum and palladium. We need to remember that the future will not resemble anything like it is today. I have a general idea of how the future will unfold, but it’s difficult to forecast the speed and extent of the collapse.

So, to stick with the tried and true guideline… KISS – Keep It Simple Stupid and focus on gold and silver as they have been money and stores of wealth for thousands of years.