How NOT to Become a Casualty in the War on Cash

Lots of bullion investors wonder if the metal they hold might one day be needed for barter and trade. They bought gold and silver, at least in part, as a form of insurance. It just might come in handy in an extreme circumstance such as a currency crisis of the sort Venezuelans are grappling with right now.

However, a hyper-inflationary collapse in the dollar isn’t the only dire scenario to insure against.

It is now clear that the dollar, and the financial network it runs on, is a mechanism for controlling people who don’t toe the government line.

That fact may be a greater reason for alarm than the prospect of a dollar collapse. But it gets far less consideration.

Wall Street banks and government regulators have teamed up against your liberty and your privacy.

Officials would like to track 100% of what you do with your money, and the banks would like to charge a fee on 100% of those transactions. Those motivations are at the root of the today’s war on cash – the push to eliminate paper cash and replace it with electronic transactions.

The Bank Secrecy Act will soon turn 20 years old. Banks have filed millions of secret Suspicious Activity Reports on transactions involving cash. And Americans performing a transaction involving more than $10,000 in cash may have an IRS Form 8300 documenting their transaction filed with the federal government.

Americans trying to transact privately with cash are being watched, and they have no idea how closely. 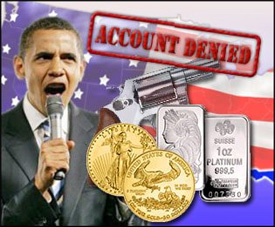 Of course, people also do fewer and fewer transactions in person.

Online ordering and payments also drive the trend toward dependence on the financial system and on-the-grid transactions. This has been a stroke of good luck for government snoops and bankers who don’t like cash.

The Chinese government is beta testing a new social credit system which purports to score the Chinese people on their behavior. Critics of the communist regime can wind up on a list of troublemakers and lose the freedom to buy the things they want.

Those who say that sort of program will never fly here should reflect on this short (and incomplete) list of what we know, then reassess:

We don’t have to imagine what officials might do with the power to target and control people in an all-electronic economy.

The digital dollar can serve as a powerful tool for enforcing “good” behavior. That is one more reason to lower your dependence on it.