Is There A Massive U.S. Gold Deposit Hidden In The Chocolate Mountains, California??

Is the U.S. Government hiding a massive gold deposit in the Chocolate Mountains in California? Well, according to a few top-notch conspiracy theorists, the U.S. Congress passed the Desert Wilderness Protection Act that has cordoned off this vast gold discovery from the public. Unfortunately, we may never know if this mammoth gold deposit exists due to the clandestine nature of our government… or will we?

In order to set the record straight, I decided to research “The Great Gold Heist” at the Chocolate Mountains and present the facts in a logical and unbiased way.

Recently, one of the more infamous “Gold conspiracy theorists” published the following video titled, Millions of Tons of Secret Gold, Ready to Be Released:

In the video, the author of the Road-To-Roota Theory reads the following from the article, THE GREAT GOLD HEIST:

On October 8, 1994 the biggest gold heist in history occurred, but this theft lacked the melodrama of a Jesse James holdup or the excitement of a Brink’s truck robbery. Nary a word was reported by the media even though this thievery was committed in the light of day. The citizens that were being robbed tried to cry out for help but the lawmen wouldn’t listen because unbeknownst to them they were helping the bandits gain their booty.

The 103rd Congress managed to accomplish more than a gang of train robbers could achieve in a lifetime when they approved the Desert Wilderness Protection Act. “Instead of voting on the Desert Wilderness Protection Act, Congress should be convening a criminal investigation,” said Donald Fife, spokesman for the National Association of Mining Districts. Fife was commenting on recent information that indicates tens of billions of dollars in gold deposits and huge real estate swindles may be the motivating factors behind the act.

Well, it seems as if the corrupt politicians have done it once again and have taken control of a vast amount of resources and wealth for their own use with blatant disregard for the public. Thus, if it weren’t for these brave souls to bring this information to the public’s attention, we may have never known there was a hidden treasure of gold in them thar Chocolate hills.

To understand more detail of this huge government gold conspiracy, the creator of the video above, continues to read the following text from The Great Gold Heist article:

In the land swap, Catellus Corp. will receive land from decommissioned military bases. One of the bases will be the Chocolate Mountain gunnery range. Unbeknownst to the public, inside the range is the world’s richest gold rift zone. Geologists estimate that the gold contained in this zone is worth between $40 to $100 billion. These are surface gold deposits which are more profitable to mine than the one-mile deep gold deposits in South Africa. 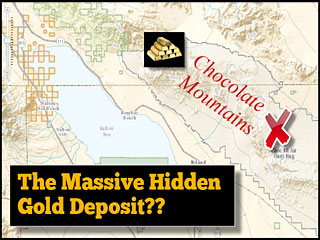 First, let’s consider the amount of gold purportedly contained in the Chocolate Mountains estimated by the geologists in the article. The geologists stated there was approximately $40-$100 billion worth of gold contained in the world’s richest rift zone located in the Chocolate Mountains. If we assume an average of say, $80 billion worth of gold in this hidden deposit, this is how much gold would be contained:

The price of gold in the mid-1990’s (at the time of the article) was about $400 an ounce. Thus, there would only be 200 million oz (Moz) of gold contained in the Chocolate Mountains or 6,220 metric tons. While this is indeed a lot of gold, Nevada has produced 206 Moz of gold since 1978, with the majority coming from just three mines (Goldstrike, Cortez and the Carlin Mine Operations).

So, as we can see, even if there was that much gold in the Chocolate Mountains (which I doubt), Nevada has already produced more gold in the past 40 years. Also, 6,220 metric tons (mt) of gold is nowhere near a million tons.

Secondly, how about the quality of the gold hidden in the Chocolate Mountains? While anyone can claim there’s a lot of gold in the ground, it has to be economical to extract and produce. Going back and listening intently to the video above, we get our answer:

According to the author of The Great Gold Heist article and the gentlemen reading the article in the video above, the Mesquite Gold mine located on the southern flank of the Chocolate Mountains is one of the top ten mines in the United States and has some of the most profitable gold deposits of any mine in the world. 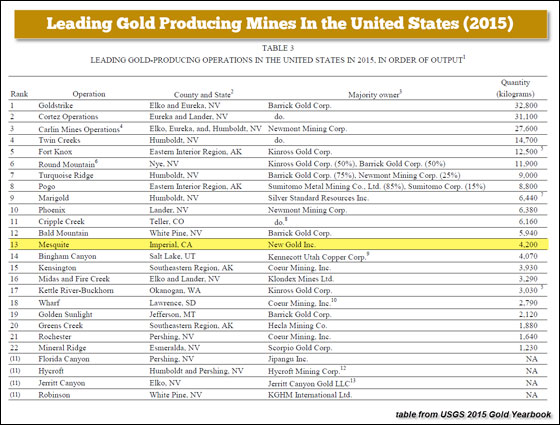 If we compare the “Profitability” of the Mesquite Mine to Barrick’s Nevada gold operations, we have the following: 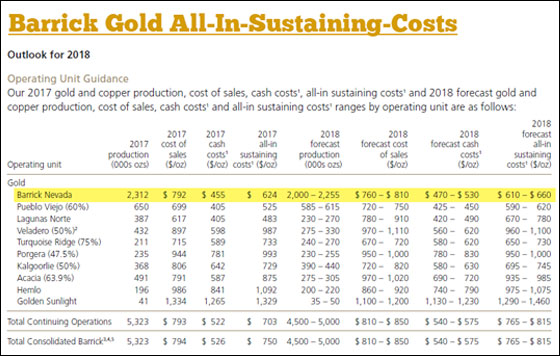 So, we can clearly see that the Mesquite Mine does not contain some of the most profitable gold deposits in the world. We didn’t even have to look across the entire globe, all we had to do was check the adjacent state of Nevada.

Part of the reason for the higher cost to produce gold at the Chocolate Mountian Mesquite Mine is due to the much lower ore grade. Here is the comparison of the average ore grade at the Mesquite Mine versus Barrick’s Nevada operations: 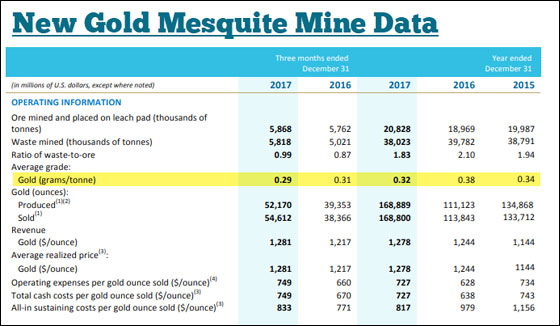 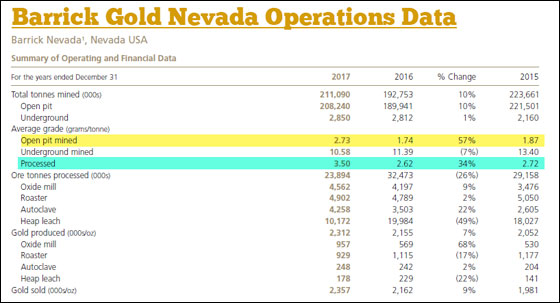 And to put the final touch on this analysis, New Gold suffered losses for the past three years:

In looking at the data above objectively, the Mesquite Mine is not that impressive and is most certainly not one of the most profitable gold mines in the world. One more thing. The Mesquite Mine only has a little less than 1.2 Moz of gold reserve deposits at an average ore grade of 0.51 g/t: 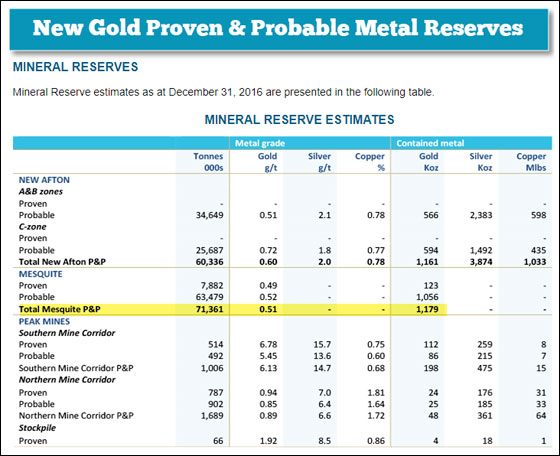 As of Dec 2016, the Mesquite Mine held 1,179,000 oz of gold in their proven and probable reserves. At current annual mine supply, this should last for approximately 10 years. And if we go to the New Gold Mesquite Mine Operations website, the mine produced 4 Moz of gold since 1985. Now how does that compare to Barrick’s Nevada operations that produced over 20 Moz of gold in the past decade?

If we look at the data logically, the Mesquite Mine is at best a subpar gold producer. Thus, the theory behind THE GREAT GOLD HEIST seems to be more HOT AIR than FACTS. While there may be some gold hidden in them thar Chocolate Mountains, it’s likely very costly to produce and would need a tremendous amount of capital to set up a large enough mining operation to extract 1-2 Moz per year. Even if this occurred, it would take over 50 years just to produce 100 Moz.

Lastly, if you continue to believe there are “Millions of Tons of Hidden Gold In the World,” then I would suggest it’s time to believe in Santa Claus and the Tooth Fairy.