THE INDIAN INVESTOR: The Major Wild Card In The Silver Market

According to an article published last year on LiveMint.com, “Silver is so ingrained in Indian tradition that the country’s currency, the rupee, is named after ‘Rup,’ the Sanskrit word for silver.” How interesting. I have been doing research in the silver market for over a decade, and I just found out from this article that India’s currency, the Rupee, is named after silver. It just goes to show, we learn something new every day.

Thus, it makes perfect sense that the Indians are the major player in the silver market as their silver imports have accounted for a significant portion of annual global mine supply. In a recent article by Louis at Smaulgld.com, he provided the following charts on Indians monthly and annual silver imports: 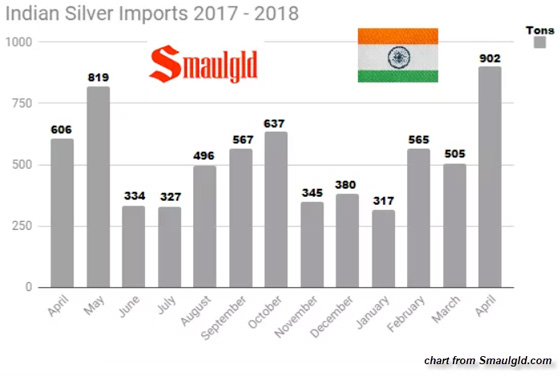 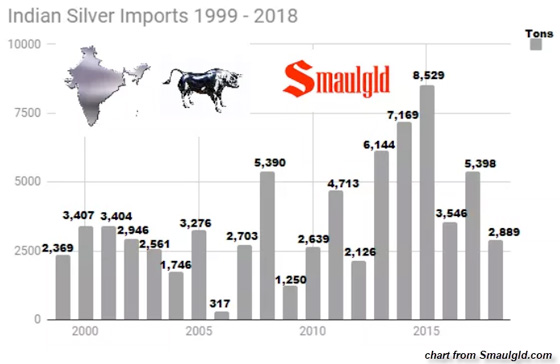 As we can see, India imported a record 902 metric tons of silver in April since last year. Furthermore, as Louis states in his article quoted above:

If India continues to import the same amount of silver as it has over the past four months for the remainder of the year, it will reach nearly 8,700 metric tons (mt) and surpass its previous record set in 2015 at 8,529 mt. Now, if India did import 8,700 mt of silver this year, it would account for 32% of total world mine supply.

In this next chart, I show annual Indian silver imports as a percentage of global silver mine supply: 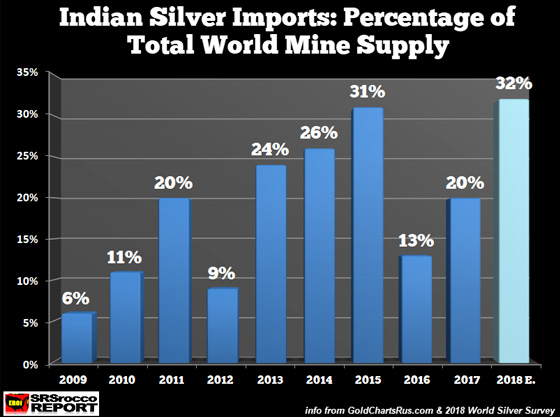 Indian silver imports increased significantly from 2013 to 2015 as investors took advantage of lower prices. However, the Indian investor wasn’t as interested in acquiring silver in 2016 as its price surged to $21 versus $14 at the beginning of the year. But, as we can see in 2017, Indian silver imports rose to 20% of global mine supply versus 13% in the prior year. And, if Indian silver demand remains strong throughout the rest of the year, it could surpass 8,700 mt and account for 32% of global silver mine supply.

While it is true that Indian investors acquire silver during falling prices, they also did so in 2011 when the silver price peaked at $49 in May of that year. We can see that as the silver price skyrocketed higher, Indian silver imports nearly doubled to 20% of global silver mine supply compared to 11% in 2010.

Which brings me to subject matter in regards to the title of this article, I believe India is a MAJOR WILD CARD that the market is vastly underestimating. Of course, many silver investors in the west have become quite frustrated with the ongoing weakness in the silver price, but the fact remains, the Global Markets and Financial System are still in serious trouble.

What happens when the global markets finally start their major overdue correction and investors begin to flee stocks and real estate to move into the precious metals to protect wealth? Some analysts suggest that the Bond market isn’t that safe this time around because a lot of individuals are invested in Bond Funds, and not the real Bonds or Treasuries. Bond funds are nothing more than BETS on BETS.

If Indian investors can import nearly a third of global silver mine supply, then what happens when the Global Markets and currencies become under severe pressure? How high could Indian silver imports go??

Thus, India may be the MAJOR WILD CARD going forward in the silver market. Actually, once panic sets into the market, we could see silver buying coming from areas and sectors that haven’t invested in silver before. For example, when the silver price starts to surge higher during the second phase of a market crash, we could see huge demand come from the following:

The four categories listed above have not big players in the silver market, but that could change at a drop of the hat as the market realizes, THIS TIME IS INDEED DIFFERENT. Moreover, Central Banks have been net sellers of silver over the past 3-4 decades. Most of the official silver sales from the 1990’s to 2013 have come from China, India, and Russia. But, what happens when Central Banks start to acquire silver??

Of course, this is mere speculation. And, I imagine the frustrated silver investor reading this would believe this is just more hype in a market that seems to be all be DEAD, but that is exactly when we experience a bottom. Furthermore, U.S. silver exports jumped to the U.K. in Apri: 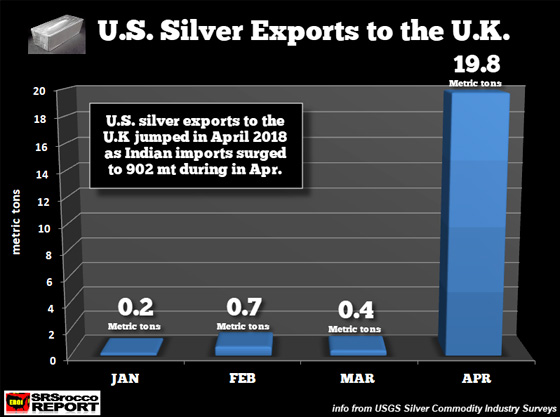 For whatever reason, U.S. silver exports to the London, U.K. jumped to nearly 20 mt in April versus very little activity from Jan-Mar. London is the major player in the silver market, and a large percentage of Indian silver imports come from the United Kingdom. It will be interesting to see how much silver India imports for the remainder of the year.

Regardless, I believe the Indian investor may be the “Major Wild Card” once the markets become chaotic. Indian silver imports could jump to more than 50% of global mine supply during the next market meltdown. However, even if Indian investors demand more silver, it might not be available (only at much higher prices) if Industrial, Institutional or Central Banks start buying as well.