Something took place in the gold industry that I thought would never happen. In a stunning press release, Franco-Nevada Gold announced that it was taking a financial stake in U.S. shale energy assets. Why on earth is one of the top gold royalty companies investing in an industry in which it has no expertise… especially in the shale oil industry?? 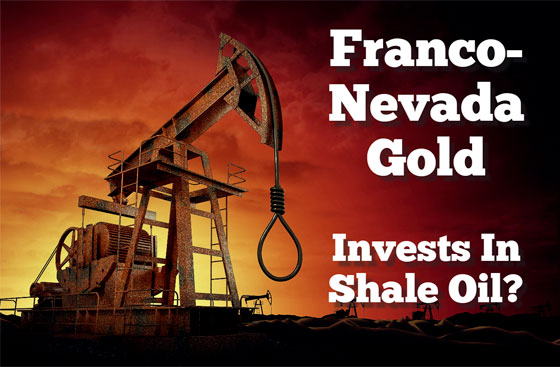 BHP has managed to unload its contentious US onshore oil and gas assets, but at a very heavy loss.

In a statement to the ASX, BHP announced it had sold its interests in four large fields to energy giant BP and another US energy player for $US10.8 billion ($14.6 billion), a heavy discount to the $50 billion it has ploughed into the venture since 2011.

When BHP Billiton began investing $50 billion in U.S. Shale assets in 2011, its profits were $23 billion that year. However, by 2016, BHP’s horrible shale portfolio helped turn its profits into a $6.3 billion loss.

Again, I am completely shocked that Franco-Nevada is going to dump $220 million into the U.S. Shale Oil Industry Black Hole. Moreover, Franco-Nevada also stated that it might purchase additional mineral rights in shale properties over the next several years. According to the August 6th press release, Franco-Nevada Enters into Strategic Relationship with Continental Resources, Inc.:

However, I doubt Franco-Nevada will invest additional funds in shale energy assets when they realize that the U.S. Shale Oil and Gas Industry is the Greatest Energy Ponzi Scheme in history. If anyone knows Pierre Lassonde or the management at Franco-Nevada, please forward them this article.

While Continental Resources has somehow magically turned losses into profits over the past year, that’s an interesting story for another day; its financials are still a complete mess. For example, Continental Resources had to borrow over 6 billion dollars since 2008 to fund its lousy shale energy operations. Before Continental started ramping up shale oil production, mostly in the North Dakota Bakken, it only held $376 million in debt. Now, fast forward to today, and it currently holds $6 billion in long-term debt: 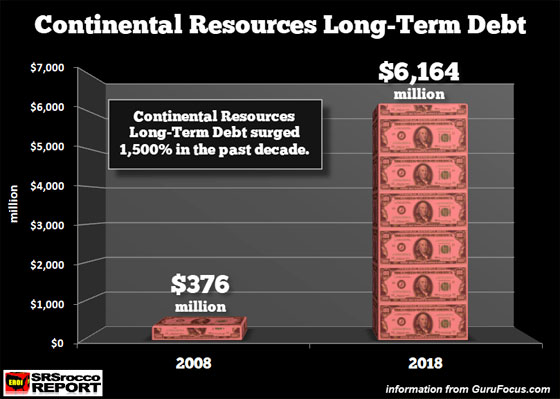 Well, there’s nothing like increasing one’s debt by 1,500% to produce shale oil that wasn’t economical, even at $100+ a barrel. In order to keep the Shale Energy Ponzi Scheme going, Continental Resources and many other shale energy companies have utilized a clever scheme of issuing NEW DEBT to pay back OLD DEBT. This is, of course, is the very definition of a Ponzi Scheme.

We find the evidence of this by looking carefully at Continental’s financials. Now, why would Continental Resources need to issue $1 billion in new debt on Dec 4th, 2017 when the company enjoyed a nearly $800 million net income profit that year, mostly due to the Trump tax cuts??

Why? It’s a charade called “Playing the game of musical chair debt.” Continental used that $1 billion to pay back $500 million in debt and to repay the borrowings on its revolving credit facility. You see, shale oil and gas companies are doing some pretty strange accounting tricks to HOODWINK INVESTORS. While I can see this tactic fooling unsophisticated investors, I am surprised energy analysts, who should know better, haven’t raised some RED FLAGS.

Here is an example of how the Shale Industry is using the “Revolving Credit Facility” to BAMBOOZLE investors: 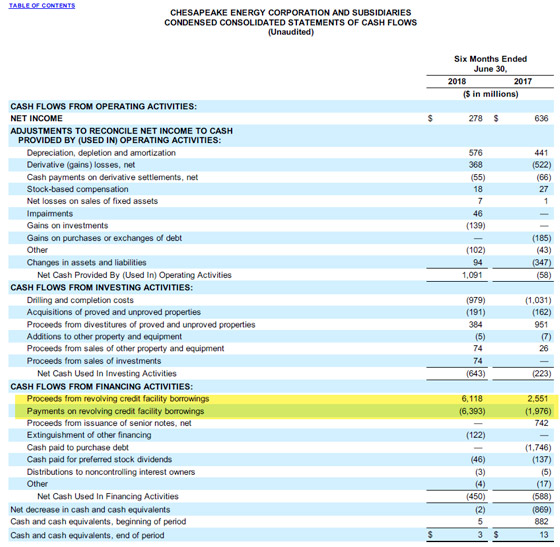 Chesapeake Energy, which was the United States second largest shale gas producer up until 2017, hasn’t made any positive free cash flow in the past 15 years. On top of Chesapeake’s $9 billion in long-term debt, the company continues to tap into the revolving credit facility to fund operations and payback previous borrowings from its revolving credit facility. If you look at the Chesapeake’s Cash Flow Statement above, you will see that it borrowed $6.1 billion to pay back $6.3 billion in the first six months of 2018. FOLKS… that’s a lot of borrowing and paying back.

Now, if Continental is now supposedly making profits and positive free cash flow, why on earth does the company continue to tap into its revolving credit facility to fund business? 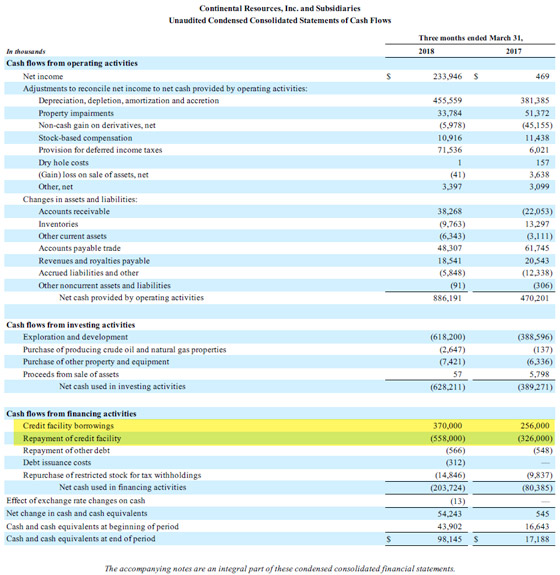 While Continental isn’t borrowing as much from its revolving credit facility as is Chesapeake, SOMETHING JUST DOESN’T ADD UP if the company is making profits and positive free cash flow.

As I mentioned above, Continental Resources long-term debt is now $6 billion. To hold $6 billion on one’s balance sheet, you have to pay money to service that debt. In just ten years, Continental’s annual interest expense ballooned to $300 million (estimated 2018) from a measly $12 million in 2008: 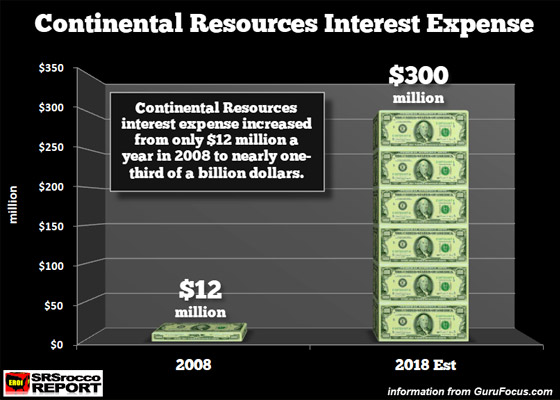 That’s correct… Continental Resources, is now paying nearly a third of a billion dollars just to service its debt. And if you think that is bad, Chesapeake Energy is forking out $425 million a year to service that $9 billion in debt… LOL.

Now, if you were Franco-Nevada Chairman Pierre Lassonde, would you invest in a shale energy company with the financial results below? 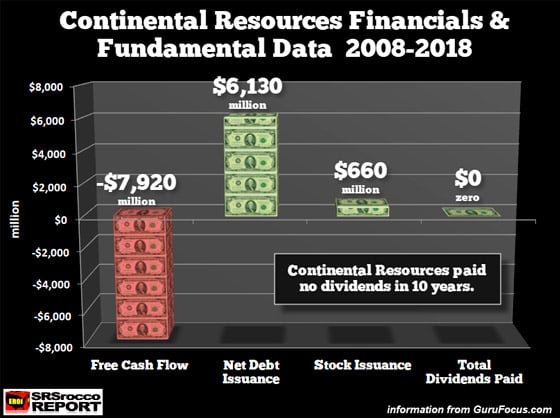 Continental’s net free cash flow from 2008 to 2017 is a whopping negative $7.9 billion. So, if the company spent $7.9 billion more to produce uneconomical shale oil and gas than it made from cash from operations, it offset it by borrowing $6.1 billion and selling $660 million in stock to investors.

And, lastly… how has Continental Resources compensated its shareholders by going $6 billion into debt over the past decade?? You got it… it has paid out ZERO DOLLARS in dividends. So, if you think it’s NOT a good idea to own a shale energy stock that hasn’t paid one LOUSY DOLLAR in dividends in ten years, then maybe you should forward this article to Franco-Nevada Chairman Pierre Lassonde.

There’s a lot more I will be writing about this new Gold Company Shale Energy Investment Fiasco, as well as more details of the U.S. Shale Energy Ponzi Scheme in upcoming articles and videos.