My Goodness, What Is Happening to Platinum?

The bearish price action in platinum has some of our clients wondering just what to expect. We are always happy to give our take on the markets. Below you’ll find a recent customer question along with our answer.

Question: The platinum price has fallen well below gold’s price and it continues to underperform the other precious metals. What is happening in the platinum market?

Answer: We see a handful of factors driving the recent declines in platinum. For starters, it is facing the same challenges we find in the gold and silver markets.

The dollar has been getting stronger, interest rates are rising, and traders on Wall Street have rarely been more carefree. Mainstream investors are positioning for economic strength, not looking for safety.

Platinum is trading like the other precious metals, which is to say performing poorly. As of this writing, platinum is down 16% for the year.

Platinum is used in autocatalysts,
coins, and jewelry.

Compare that to silver’s decline of 17% and the price action looks pretty much in-line.

There are some other fundamentals behind platinum’s underperformance in the past few years though. Demand from automobile manufacturers is weakening significantly – forecast to be down 6% this year.

The prognosis for diesel cars is even worse, and that has hurt platinum demand more than the other metals. Diesel vehicles demand primarily platinum for their catalytic converters, while gasoline exhaust systems use mostly palladium.

The 2015 scandal involving Volkswagen revealed that diesel is not nearly as clean as thought previously. The car maker had been gaming the emissions testing system, and platinum-based catalytic converters were less efficient at scrubbing out unspent fuel from diesel engine exhaust.

Those revelations have had a serious impact on platinum demand – particularly in Europe where diesel had widespread adoption based on the false assumption that it was dramatically more “green” than gasoline. 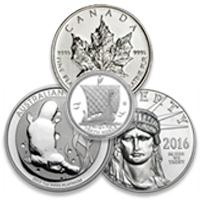 Platinum is currently in surplus. Experts anticipate supply will outstrip demand by nearly 300,000 ounces this year.

The foreign exchange markets may also be contributing to platinum’s lower price. Recently the South African Rand has fallen significantly. Miners, who are typically paid in dollars or euros, are realizing much higher prices when those funds are converted to Rand.

For bullion investors looking to speculate as well as diversify their holdings, platinum looks interesting at these levels.

The political environment in South Africa has long been a challenge for miners. It may be about to get far worse. That may mean even more weakness in the Rand, but it can also mean a serious disruption to supply.

We also question how much longer the platinum price will remain at a significant discount to palladium. The two metals are largely interchangeable in automotive catalytic converters. If car makers see a good opportunity to save by switching to platinum, look for them to do it.