Win Big in Gold and Silver without "Buying the Bottom"

Last month in this space, I penned an essay titled "Are Silver and Gold 'at the Flood'"?. A few weeks later, two other essays on another widely-read site discussed this topic from the same perspective and sourcing – a case of "great minds thinking along similar lines"?

I made the case of a misalignment in the precious metals' markets regarding price versus value which had become so pronounced that – in the near term – an explosive change in trend catching most participants by surprise was pretty much baked into the cake.

Since that day, gold has notched its largest one day up move in two years, palladium has risen $200 an ounce, platinum and silver have penetrated the first layers of resistance, and mining sector ETFs have moved forcefully from their basing platforms.

Does this signify the end of the seven-year metals' bear market stretching back (with the six-month exception in 2016) to mid-2011? And is the bullish case risk/reward profile still compelling?

What follows could be one of the most valuable (and perhaps prescient) series of comments David Morgan has made in recent memory. Concerning the past few weeks' market action of the overall markets in general, and the impact on the precious metals' space in particular, he tells us:

The best way out is always through. Precious metals investors have gone through an extensive "wear you out" phase, in what may prove to be the most important precious metals bull market in the past century.

These words will no doubt be scoffed at during the initial publication of these thoughts. Yet the very few who have gone through this trial of holding a position in the precious metals need to understand that the shift from paper forms of wealth to real forms of wealth has now begun.

Almost everything in today's world is not what "appears" to be true. U.S. Bonds are thought to be the safest investment possible, yet monetary history is clear that there is a 100% failure rate of currency [which has been] issued beyond the markets' capacity to utilize it for productive means.

At that point, rank speculation takes over the markets, and gambling becomes the fashionable way to "invest." Gold has proven through thousands of years to remain a final means of payment, as currencies come and go. This lesson – which is missed by the vast majority – will once again be taught to the world.

A number of charts and comments by market participants could be presented here to bolster the bullish case, but let's just look at two charts from many, plus a comment -- then summarize how you might either add to your metals' holdings, or step up to the plate for the first time and "catch a wave" on what may become a major wealth-creating bull run. 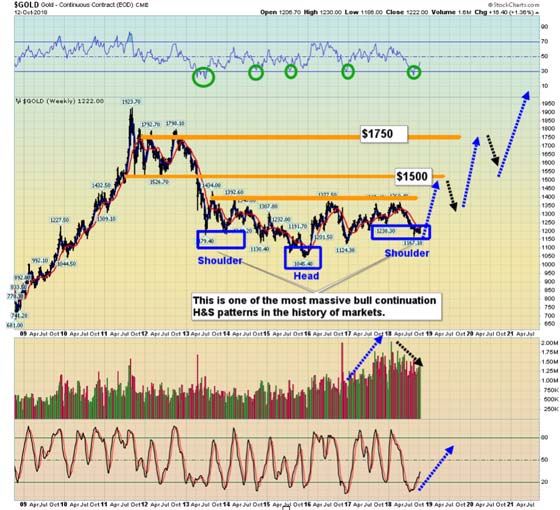 The above chart, posted by Stewart Thomson of the Graceland Updates active traders' Letter - to which I have been a paid subscriber for a number of years - speaks eloquently for itself. As wizened traders with decades of experience in the markets like to say, "The bigger the base, the greater the upside case!" 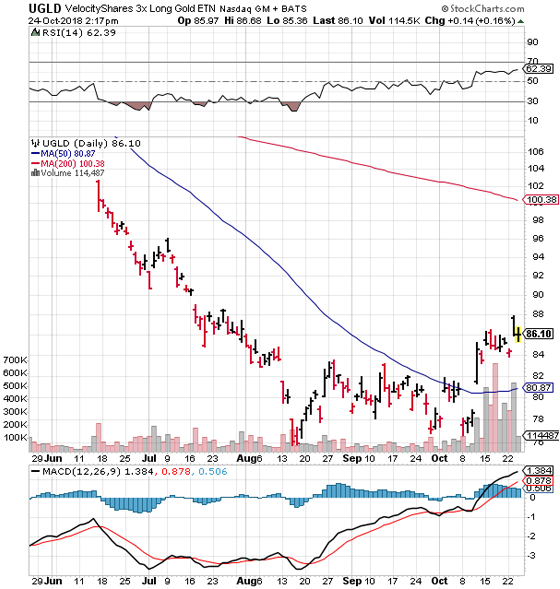 An uncommon, often predictive chart formation (discussed in great detail in the book David Morgan and I co-authored, titled Second Chance: How to Make and Keep Big Money from the Coming Gold and Silver Shock-Wave, is the Island Reversal.

This sign (usually of one to three days) is most predictive in highly-liquid markets. It can portend a major trend change – confirmed or denied – within a few days or weeks. On this leveraged ETN gold chart, notice that on either side of the dates October 8-10, is a gap where no active trading took place (silver made a smaller one).

The Island Reversal is a possible exhaustion move by disheartened longs, followed a few days later with a buying explosion in the opposite direction.

We can be more confident when this is accompanied by other confirming indicators, such as the massive buying volume shown above. The island gap should not be filled later on by prices declining through it -- which would indicate that further base-building needs to take place in order to launch a sustainable upside reversal.

In early October, Hungary's central bank announced it had completed purchase of enough gold (the first addition since 1986, and at 31.5 tonnes, equal to 1949 levels) to raise its reserves by ten times. In their own words, “Gold is still considered to be one of the world’s safest assets.”

This action follows major gold acquisitions by Poland, and repatriation of gold reserves from the U.S. to their country of origin by other European nations, as well as continued, feverish accumulation of gold (and silver) by Russia, China and India.

"At the Flood?", along with this essay, should provide plenty of ammunition for decision-making about the near-term strength and longer term bullish case for gold and silver.

"Should you decide to accept this mission..." follow these time-tested rules for getting – and keeping on the right side of the bull run:

Once your precious hoard has been squirreled away, spend time reading Second Chance and then follow the advice of legendary futures' trader, Stanley Kroll, one of this writer's earliest and most-appreciated mentors.

His simple Motto? "Be Right. And Sit Tight!"