One of the greatest asset bubbles of all time appears to have just burst.

It’s not the stock market. Despite recent downside volatility amidst bubble-like valuations, so far stocks have merely entered a correction.

Cryptocurrencies, on the other hand, have entered into a full-blown meltdown. Bitcoin will go down in history for its extraordinary rise from zero to a high of $19,783 on December 17, 2017. Its subsequent fall may be one for the history books as well. 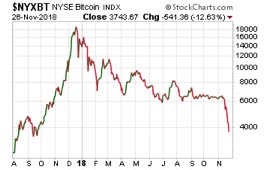 In the second half of November, Bitcoin prices fell through a months-long trading range, triggering heavy selling down to around $3,500. Anyone unfortunate enough to buy Bitcoin at over $19,000 now faces a loss of more than 80%. Losses are also staggering for Bitcoin Cash, Ethereum, Ripple, and many others.

The story of digital currencies won’t just be a matter of their rise and fall, however. Some may bounce back. Bitcoin and its progeny may embark on another spectacular run to dizzying new heights.

Then again, they may not. Since the leading crypto coins aren’t backed by anything tangible, their value is entirely speculative.

Nevertheless, the utility of digital currency is very real. The blockchain enables individuals to engage in online transactions outside the banking system. And Money Metals Exchange is by far the most capable company in America when it comes to allowing precious metals customers to use cryptos as a payment medium.

It’s not just radical libertarians and black market merchants who value decentralized alternative payment systems. Such alternatives have the potential to offer practical advantages to users, such as avoiding fees on international cash transfers or credit card transactions.

For some, finding alternatives to conventional financial tools is a must. Banks and credit card processors are increasingly denying services to customers for their political views.

It happened recently to one of the most prominent alternative social networking sites, Gab, merely because it allows controversial views to be expressed by its members – in the same way that a viewpoint neutral email or telecommunications provider does.

Gab has been denied by multiple banks during the underwriting process for a new payment processor. Multiple processors supported us, their banks did not.

Gab is the supreme example of why bitcoin exists. We will be integrating BitPay asap because Coinbase already banned us.

Outside of this we will be setting up a PO box to mail cash/checks to.

This is what we need to resort to in order to have any revenue. This is the level no-platforming has reached.

As the threat of ideologically motivated financial de-platforming by banks and payment processors grows, so does the need for robust alternative payment systems. However, as noted by Torba, major Bitcoin exchanges such as Coinbase are behaving like politically correct bank intermediaries – blacklisting people they don’t like from the crypto marketplace.

They are also collecting personally identifying information on their customers and handing it over to the IRS. The only way Bitcoin holders can absolutely guarantee their privacy is to never put their transactions on the blockchain ledger – i.e., never use their Bitcoin for anything.

The problems with Bitcoin are numerous – slow transaction confirmations, excessive energy consumption, and risk of loss due to loss of digital key, theft, fraud, and potential government crackdowns.

The biggest fundamental problem with Bitcoin and other unbacked cryptos is the lack of any sound basis for valuation. That is a problem that can be addressed by putting real assets on the blockchain, but a degree of counterparty risk would remain.

Overstock CEO Patrick Byrne is investing in blockchain businesses that aim to tokenize publicly traded companies. He sees this as a way to decentralize Wall Street and end share price manipulation by large institutional traders.

Gold-Backed Cryptos Are Not Yet Safe

Gold bugs are eyeing digital currencies backed by physical precious metals. There are many technical and legal challenges still to be worked out, and there are likely to be a few scammers in the mix as well.

But optimists hold out hope that one day it will be possible safely and reliably to use gold or silver on the blockchain to buy shares of stock or perhaps even real estate all without having to convert to dollars or go through the banking or brokerage system.

Digital gold could emerge as a leading default store of value in lieu of dollars or Bitcoins – which would drive huge new demand for the metal.

That’s the bullish case for blockchain and its possible integration with sound money. There is also a bearish case.

What if governments and central banks co-opt the digital currency space as part of a war on cash?

International Monetary Fund chair Christine Lagarde suggested in a recent speech that if central banks issues their own cryptocurrencies, they “could satisfy public policy goals, such as financial inclusion, and security and consumer protection; and to provide what the private sector cannot: privacy in payments.”

Globalist central monetary planners may claim to have our “inclusion,” “security,” “protection,” and “privacy” as their primary concerns. Their real concerns are to drive out competition to fiat currencies and accelerate the move to an all-digital economy where paper bills and coins are abolished and private transactions are impossible.

Federal Reserve officials have so far denied they plan on issuing a digital “Fedcoin.” But they have looked into it.

In the dynamic and rapidly evolving alternative currency space, it is impossible to predict exactly what new government interventions, technological innovations, or market iterations will drive the next major trend.

Precious metals may play a growing role in backing alt-coins. Either way, they will continue to play an important role in the portfolios of investors who want to protect themselves from the risks inherent in digital and paper wealth.