The Fed blinked – but didn’t flinch away from another rate hike. On Wednesday, Federal Open Market Committee (FOMC) policymakers rejected President Donald Trump’s call for a pause. They raised their benchmark rate by a quarter point to a range up to 2.5%.

The only concession Fed chairman Jerome Powell offered to Trump and nervous stock market investors was a revised, less hawkish outlook for 2019. Powell and company now indicate they intend to hike just twice next year.

They claim the additional hikes are needed to bring rates further into “neutral” territory.

But with economic data and inflation indicators dipping over the past few months and the stock market not taking well to the Fed’s latest actions, the FOMC may be eying the other side of “neutral” by the time it meets again in late January.

Inflation pressures swung dramatically mid year. Through this summer, inflation had been trending steadily higher and threatening to far exceed the Fed’s 2% target.

Crude oil prices hit $75/barrel by the end of June. Following a failed breakout attempt in September, oil prices proceeded to plunge for several weeks running. They fell nearly 10% this week to record a 16-month low at $46/barrel.

Selling in other key commodities hasn’t been as severe.

Gold prices have actually firmed up over the past four months. Silver has been forming a potentially bullish base as well. But falling energy costs have dominated the headlines, helping to drag down inflation indicators and inflationary expectations.

The Consumer Price Index (CPI) report for November showed price levels for the month flat at 0% (though still running near 2% year over year).

The bond market is now pricing in a disinflationary trend. Over the past few weeks, long-term interest rates have been moving down, with the 10-year yield hitting a 6-month low on Wednesday.

The “break even” inflation rate in the market for Treasury Inflation Protected Securities just hit a 14-month low of 1.82%.

Falling long-term interest rates are converging toward rising short-term rates to produce a flattening yield curve. The spread between the 10-year yield and 2-year yield comes in at just 10 basis points.

The yield curve is in danger of inverting as the new year approaches – meaning the shorter-term note would yield more than the longer-term note. An inverted yield curve is historically a reliable warning sign of an economic downturn. It warned ahead of both the 2008 and 2001-2002 meltdowns.

The Fed is now operating in a danger zone – in more ways than one.

The official U.S. national debt will enter 2019 at about $22 trillion. That’s double what it was just 10 years prior. It is projected to double again in 10 years. That’s powerful exponential growth.

Unfortunately, the economy won’t keep pace, meaning the debt to GDP ratio will grow to dangerous levels that can either trigger a default or a currency crisis.

If a corporation had an insurmountable and growing debt load, then investors would rightly begin to anticipate its eventual collapse into bankruptcy. Absent some solution to its debt problem, the troubled company’s share values could be expected to steadily deflate.

But what if that corporation had access to an unlimited credit line? Then it could keep borrowing in perpetuity in order to keep business operations going as well as to pay the interest owed to creditors. Its growing debt load would no longer entail deflationary implications for its shares because it could always bail itself out of financial trouble. 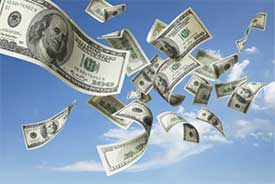 The U.S. government has what amounts to an unlimited credit line with its banker, the Federal Reserve.

The more the government owes, the more the Fed stands ready to digitally print currency into existence for the purpose of buying government debt.

Under our unlimited fiat currency system, the bigger… the more unsustainable… the more unpayable the government’s liabilities, the more the currency supply will have to inflate.

Dollar depreciation ultimately gets reflected in precious metals markets. They can be ignored while other markets are doing well. Or suppressed in the futures markets while central bankers do their dirty work. But physical gold and silver supplies cannot be created out of thin air like Federal Reserve notes.

When investors wake up to the need for the security money metals provide as contra-dollar safe havens, that increase in demand will force a great revaluation to much higher levels.