Precious metals markets enter 2019 with an opportunity to shine. Several major bullish drivers are lining up to start the New Year – including technical, fundamental, monetary, and political drivers.

Before delving into each of them, let’s consider where we’ve been over the past 12 months.

To be frank, 2018 wasn’t a particularly bright year for gold and silver prices. Gold will finish with a slight loss; silver with a larger loss just shy of 10%.

It could have been worse.

Sentiment toward metals got extremely depressed mid year. Speculators took out record short positions in the futures markets. Meanwhile, sales of American Eagles and other popular retail bullion products slowed to a trickle.

By late summer, the money metals were making new yearly lows as the stock market headed for new record highs. But in September, the Fed went one hike too far.

That fear – and the rotation out of stocks that followed – helped slowly reinvigorate safe-haven buying in precious metals.

From late November through the end of the year, gold and silver prices rallied to multi-month highs. Momentum could carry forward to a strong first quarter of 2019.

Silver looks especially interesting on the charts. Prices formed a long, drawn out double bottom base from August until Christmas week. Silver then broke out sharply through its $15.00/oz resistance level. 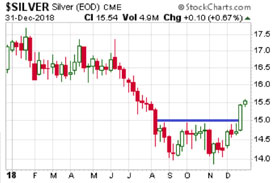 The price action resembles an early stage liftoff from a launching pad. Silver is famous for its vertical moves, both to the upside and the downside.

There is a good chance its downside was fully exhausted in 2018.

One indication of just how depressed silver prices got: the silver:gold ratio hit its lowest point in a quarter century. Silver briefly got as low as 1/86th the price of gold.

One trend to look for in 2019 is a narrowing of the price spread between gold and silver.

The way that usually happens is that silver gains more than gold during rallies, so simply owning silver is a good way for most investors to play it. More sophisticated traders can try putting on long silver/short gold trades or selling their physical gold in exchange for silver.

The mining industry has suffered setback after setback in recent years due to low metal prices (sometimes below average all-in production costs) and poor management decisions. The strong companies have managed to survive and some even turned profits in 2018.

However, the industry as a whole in its weakened state lacks the capacity to ramp up production in 2019.

Analysts at Refinitiv GFMS (formerly Thomson Reuters) project gold mining output will decrease slightly in the year ahead – from approximately 3,282 tonnes in 2018 to 3,266 tonnes.

Silver mining is more difficult to forecast since two thirds of silver production comes from the mining of other primary metals (mainly copper, lead, and zinc). The share prices of base metals miners got hit hard in the second half of 2018, so some large-scale capital-intensive expansion projects may have to get scrapped.

The physical silver market has been amply supplied in recent years by growing production out of Mexico. But it may have now peaked. We will find out in the year ahead whether the new leftist government in Mexico is mining friendly.

Political risk is growing in other parts of the world, especially South Africa – a major supplier of gold and the world’s leading supplier of platinum and palladium. However, the mining industry there faces escalating political threats as the government threatens to seize white-owned land without compensation and impose crippling regulations on businesses.

Demand for precious metals and base metals is likely to show a small increase in 2019, barring a major global economic contraction. For gold and silver, investment demand could swing prices at the margins.

People tend to buy precious metals when they are fearful of holding conventional financial assets.

If investors continue to flee equities and cryptocurrencies, then it will be a question of whether hard money or the U.S. dollar serves as the premier safe haven. It only takes a small proportion of investors choosing precious metals to have a big impact on these relatively tight markets.

Central bank buying will continue to be a significant source of gold demand.

According to the World Gold Council, central bank demand for gold came in 22% higher in the third quarter of 2018 compared to the prior year.

In 2018, new sources of official buying emerged. For one, the Hungarian National Bank purchased 28.4 tonnes of gold – its first major gold purchase since 1986.

The Polish central bank steadily accumulated gold last year, too, bringing its total reserves over 117 tonnes. Turkey also got in on the action, adding 18.5 tonnes in the third quarter.

Russia, meanwhile, continues to be the world’s most aggressive gold buyer. The Russians are adding about 20 tonnes to their reserves every month as they liquidate holdings of U.S. Treasuries.

Another major state buyer of gold is China – and it is likely buying much more than it reports publicly. With the growth of the Shanghai Gold Exchange, precious metals are increasingly flowing into Asia to satisfy growing monetary, investment, and jewelry demand in the region.

Wild Card: Will the Fed Back Down and Reverse Course on Rate Hikes?

Other factors, such as trends in inflation, the economy, and financial markets can move metals markets – as can metals’ own particular supply/demand fundamentals.

That said, if Federal Reserve policy czars were to do an about-face on rates in early 2019, the U.S. dollar would likely get sold off. That translates into upward pressure for hard assets, at least in dollar terms.

U.S. monetary planners ideally wanted to get the Federal Funds Rate up to 4% before changing course. If they stop short of 3%, they will be working with a stripped down set of conventional tools for stimulating the economy out of the next recession.

During a downturn, the Fed typically cuts by about 4 full percentage points. If it doesn’t have room to do that before reaching zero, it might look to negative interest rates, Quantitative Easing, or other unconventional liquidity-injection programs.

The Fed will face tremendous political pressure in the months and years ahead not only to hold interest rates artificially low but also to monetize soaring U.S. debt.

As a new Democrat-controlled Congress takes power amidst a partial government shutdown, the political theater that grabs headlines will be a distraction to the larger tragedy playing out – namely the national debt.

The federal government is projected to begin running trillion-dollar budget deficits in 2019. It will also be facing a funding crisis for Social Security and Medicare in just a few short years. With Washington mired in dysfunction, there is little chance of any bipartisan solution emerging.

President Donald Trump ran as an outsider who vowed to “drain the swamp.” He has yet to fully embrace that role. Only in the last few days of Republican control of Congress did he put up a fight over the budget – and only over the issue of funding for border security.

If Trump doesn’t get a handle on deficit spending, then rising borrowing costs will counteract the tax cuts and other pro-growth policies he championed. The Trump boom in the stock market may have already come and gone.

Yes, he can blame the Fed for spoiling the party. But the next infusion of monetary stimulus won’t necessarily create another boom on Wall Street. It might generate a boom in commodities and consumer prices – i.e., the “bad” kind of inflation.

The Fed is in a tough spot. It can’t force Congress to pass balanced budgets or reduce its need to borrow.

Since members of Congress know that whatever new debt they take on can be papered over by an increase in the currency supply, they have no particular incentive to be fiscally responsible.

Under our fiat monetary system, the “end game” isn’t a debt default. It is instead a perpetual slow-motion default on the value of the currency in which the debt is denominated.

A weaker dollar is coming. You can take that to the bank – or more wisely, a safe for precious metals storage.